Posted in: Disc Reviews by Gino Sassani on August 2nd, 2018 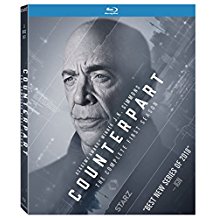 “30 years ago during the Cold War, there was an experiment… Something went wrong. They opened up a passage directly beneath us. When you go through this door, you come out the other side, you’re in another world, identical to ours. Same experiment… When this door opened our paths began to branch off more and more over time.”

That setup describes the premise behind the new original science fiction series on Starz, created by Justin Marks, a writer who most recently delivered the script for Disney’s live-action Jungle Book film. This is his first attempt at building a series from the ground up, and it’s absolutely a winner.

Howard Silk (Simmons) has worked for a secret government agency located in Berlin for 30 years. He has no idea what the work is actually being used for. He comes in every day and passes messages back and forth with another operative who is separated by a glass pane in another room. He’s a good worker with a spotless record. His life is rather dreary. He pretty much works and visits his wife who is in a coma brought on by a car accident six weeks earlier. He has been longing for a promotion for years and has a disappointing meeting with his superior who pretty much tells him it’s never going to happen. The next day everything changes forever.

Silk comes to work and finds that his access code no longer works. He’s brought up to the executive floor where he is read into the purpose behind the location. It is called The Crossing. There is an alternate world on the other side of an underground tunnel. These two worlds have developed a kind of uneasy peace. The building is somewhat like a customs border where travelers go through to visit each side. Like a normal border, there are visas, and there is an embassy on both sides. But the two sides do not trust each other. Both sides have operatives and spies, and the other side blames our side for a devastating flu epidemic years ago that claimed the lives of 7% of that world’s population. So why the sudden change of heart? Why is Silk learning all of this now? It’s because his other-side doppelganger has arrived with information from the other side, and a condition of his help is working with his other self. He ends up caught up in the game of espionage between the worlds.

J.K. Simmons returns to television, where he spent over a decade as the criminal psychiatrist on Dick Wolf’s Law & Order franchise. Since that time he’s gone off to make some pretty good films, getting a well-deserved Oscar for his role in Whiplash. It would have to be a pretty good role to bring him back to the television landscape, and the dual role of Howard Silk is just that kind of temptation. Simmons very literally carries this show as two versions of the same character. He does an absolutely brilliant job of taking on the different personalities of the diverging characters. What impresses me most isn’t the grand differences between the two. That’s not where his superior skills are needed the most. It’s those subtle changes that he manages to keep consistent between the two Howards. It’s the way he walks and carries himself. It might be a slight difference in the intensity of his eyes. Often it’s just the little things that are so compelling. On top of delivering these two versions and their individual aspects, these characters are both evolving over the course of the first season. They get to spend a good deal of time in each other’s shoes, and so as each episode progresses Simmons must necessarily track that evolution on not one but two characters. Honestly, I don’t know how he keeps track of it all. But it’s the best juggling act I’ve seen in a performance for decades. Simmons deserves an Emmy to keep that Oscar company on his shelf.

There are quite a few good supporting actors in the show. Harry Lloyd plays Peter Quayle, who is the son-in-law of the head of the diplomatic department. He’s played in a minor role by The West Wing’s Richard Schiff. Olivia Williams is Emily, Howard’s hospitalized wife in this world but his ex-wife and conspirator in the other world. Sara Serraiocco is a renowned concert violinist in our world, but a deadly assassin over there. Stephen Rea is a mysterious man named Pope on the other side, who appears to pull a lot of that world’s strings. I suspect that Marks is a Marvel fan. I can’t help thinking that it’s not a coincidence that Peter Quayle and Howard Silk sound a lot like Peter Quill and Howard Stark.

The premise of Counterpart isn’t terribly original. Science fiction has dealt with the idea of alternate realities or alternate universes since before the actual study of string theory was even born. Star Trek had its mirror universe, and more recently Fringe dealt with relationships between two alternate worlds. But Marks gives us a little extra here. While reveling in its science fiction setting and idea, the show is really a Cold War-era thriller. Marks does an excellent job of setting up his universes and getting us involved in the action quickly but never feeling rushed. Part of that is just how compelling Simmons is to watch. Part of that is because of the level of detail we get into the concept. Marks manages to put his big fictional premise into a setting that is easy for us to understand and accept. It’s likely the most realistic sci-fi show you’ve ever watched. The other side is clearly a sci-fi version of the Soviet Union. There is a Karl Marx street, and that world has a more oppressive government. Hey, maybe that’s where Colin Kapernick is actually from. Many of the characters there have Russian-sounding accents. The analogy is completely clear.

The production values are quite good throughout. Of course, the big achievement is how well two characters can interact while being played by the same character. There’s no obvious split-screen technology here. It’s completely flawless as characters can walk around each other with faces clear on each one. The establishing shots give us two versions of Berlin. As we change between them we’re offered shots that morph from one skyline to another. It’s all quite impressive.

You have to pay attention. While the production design makes it easy to understand what is going on, you still have to watch carefully. This isn’t the kind of show you run in the background. I can’t even imagine having to watch this one week at a time. This is the kind of show made for binge watching. I watched all 10 hours in one sitting.

Each episode is presented in its original broadcast aspect ratio of 1.78:1. The 1080p image is arrived at with an AVC MPEG-4 codec. Color correction is used quite heavily to help us know which world we are in. The other side is more gritty and somewhat monochromatic. On our side colors are a bit more vibrant. Black levels are pretty strong. There’s a very filmatic quality to the entire production design.

The Dolby Digital HD Master Audio 7.1 is a complete but very pleasant surprise. While the surrounds are not very aggressive, they work in subtle ways both to immerse us into this world and even to tell which world we are in. Over there the population has suffered a big blow, so there aren’t as many traffic or street sounds. You also hear less commercial activity because of the authoritarian government which likely limits that kind of hustle and bustle. Dialog comes through perfectly, and a hint of subs adds depth to the audio presentation.

Season Outlook: (1:58) This is really just a brief promotional piece that offers a couple of insights into the show.

Inside The World Of Counterpart: These are production diaries for each episode and run just about two minutes for each.

My favorite comedy is Trading Places. It’s a film where Eddie Murphy and Dan Aykroyd are the pawns of a couple of rich uncles who decide to settle the old environment vs. genetics argument by switching the lives of a successful stockbroker with a street criminal and con artist. That same debate is the backbone of Counterpart. The idea is that the worlds started as just one. The experiment caused our world to split in two like an single-celled organism. At that point the people and events are identical. But now 30 years later the worlds evolved independently. So now these two Howard Silks are very different people, and it becomes quite entertaining to explore these differences. “Pretty soon you’ll know what I know.”

Gino Sassani is a member of the Southeastern Film Critic's Association (SEFCA). He is a film and television critic based in Tampa, Florida. He's also the Senior Editor here at Upcomingdiscs. Gino started reviewing films in the early 1990's as a segment of his local television show Focus. He's an award-winning recording artist for Omega Records. Gino is currently working on his 8th album Merchants & Mercenaries. Gino took over Upcomingdiscs Dec 1, 2008. He works out of a home theater he calls The Reel World. Favorite films: The Godfather, The Godfather Part II, The Body Snatcher (Val Lewton film with Karloff and Lugosi, not the pod people film), Unforgiven, Gladiator, The Lion King, Jaws, Son Of Frankenstein, The Good, The Bad And The Ugly, and Monsters, Inc.
Dream Big (UHD Blu-ray) (4K) The Miracle Season