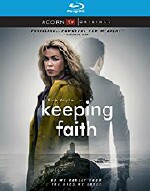 That’s pretty much the premise for the Acorn release of the first season of Keeping Faith, or first series as the Brits like to say. It’s an 8-episode slow-burner drama that deals with the aftermath of the disappearance of a guy who appeared to be your average Joe with a loving family. On the surface you have the makings of an interesting series. But the real devil is in the presentation.

Eve Myles plays Faith Howells, who finds herself in just that sort of predicament. She and her husband were law partners in a firm they ran in a small Welsh town. As Faith digs into his disappearance, she stumbles on to things she wasn’t aware of. The firm is in bad financial shape, but that’s not the worst of it. It appears Hubby Evan (Freegard) was desperate enough to go to some mobster kind of guys to try to right the ship. There was a lot of pressure to keep it all going. The firm was started by his father, and they have another attorney on board named Cerys Jones (Daniel). He owed some bad people a lot of money, and now they begin to pressure Faith to honor the debt.

Faith turns to a former client, Steve Baldini, played by Mark Lewis Jones. He’s had more than his share of run-ins with the law. Naturally, or he wouldn’t be a client. But he’s been trying to turn his life around for his own kid. He tries to help, but it looks bad all around for Faith. To the Children’s Services it looks like she exposing her kids to a bad element. To the police it looks like an affair and good reason to have done away with the husband. There are some clever angles here, and it makes for some good drama.

It’s the presentation that weighs this series down like a pair of cement shoes. Myles is obviously a pretty good actress, but she isn’t often given a fair chance to shine. She often acts in ways that really don’t track. There are a lot of beach picnics and extravagant actions that don’t make her appear to be having as much of a crisis as she is. The writers aren’t being fair with the character at all, and so it becomes problematic to feel the sympathy we desperately need to feel for her. She ends up not being a very likable person. Truth to tell, none of these characters are very likable by the end of the season. That gets in the way of our making the necessary emotional connection.

It also doesn’t help that the episodes are padded. There are long moments of contemplation that had tempted me to use the fast-forward button on my remote. There’s no sense of urgency in the pacing, and I felt like the crew were struggling to fit a two-hour movie into eight hours of television. There are just as many music interludes where the same dang song is used every week to waste our time for a few minutes. It’s also not a very good song, but even if you like it, that will stop after eight hours. It’s like getting trapped in Disney World’s It’s A Small World Ride. So time is wasted, and we’re made to feel uncomfortable while we wait.

The best saving grace of the show are the wonderful Welsh locations. These are places we don’t get to see often, at least not in the States. But just as the locations are beautiful, the Welsh setting creates yet another issue. The show was filmed both in Welsh and English using actors who were fluent in both. That is, all except lead Eve Myles, who had to learn the Welsh dialog. The actors appear to slip into a little Welsh even on the English end of things, and all I can say for that is thank God for subtitles. It was hard for me to follow much of the conversation. I’ve watched a ton of BBC stuff, and that’s not usually an issue for me. It was here.

There a few bonus extras that take us behind the scenes a bit. The show gives us all eight episodes on two discs so that the image quality remains high. All I can do is hope that they work out the pacing issues before another season comes my way. I would like to stay with it to get some answers, but I need a tighter show to do that. It doesn’t help that the director brags about not planning or blocking his shots. It’s no wonder the pacing is so bad. I’ll be checking out the next season just in case someone is listening. “Even the most unexpected people, they sure surprise us, don’t they?”

Gino Sassani is a member of the Southeastern Film Critic's Association (SEFCA). He is a film and television critic based in Tampa, Florida. He's also the Senior Editor here at Upcomingdiscs. Gino started reviewing films in the early 1990's as a segment of his local television show Focus. He's an award-winning recording artist for Omega Records. Gino is currently working on his 8th album Merchants & Mercenaries. Gino took over Upcomingdiscs Dec 1, 2008. He works out of a home theater he calls The Reel World. Favorite films: The Godfather, The Godfather Part II, The Body Snatcher (Val Lewton film with Karloff and Lugosi, not the pod people film), Unforgiven, Gladiator, The Lion King, Jaws, Son Of Frankenstein, The Good, The Bad And The Ugly, and Monsters, Inc.
Christopher Robin WWI – The War to End All Wars