WWI – The War to End All Wars

Posted in: No Huddle Reviews by Gino Sassani on August 6th, 2018 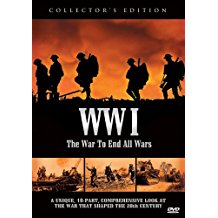 The First World War long existed in the shadow of the second. When it was fought, the term World War was not yet in existence. Until after the Second World War, it was referred to mostly as The Great War. The footage from this war is far more rare. Most of us have seen little of it. Clips from the Second World War have been used over and over for countless documentaries. There are no longer any survivors left alive from that Great War. You won’t find them interviewed on television, and you won’t hear their stories told to the extent you’ve heard accounts of other conflicts. The results of that war do still live with us today, but how many of us truly understand any of it? Mill Creek brings us the 10-part documentary series from 2008 WWI: The War To End All Wars.

The start of the war is more complicated than just the assassination of an Archduke. Unprecedented feelings of nationalism, an intricate web of alliances, and an arms race fed by new technologies in weapon technologies: all of this created a powder keg that was merely ignited by that fateful assassination. It’s a story worth hearing in the detail provided here.

This show doesn’t pack the kind of punch most documentaries deliver. It’s actually more like listening to a 10-hour lecture on the war. Narrator Fred North takes us on a 10-hour journey through the complicated details of this war. He examines not only the events but the consequences of those events. What we get is a comprehensive look at the intricacies of World War I. There is a ton of vintage footage here, more than I thought existed. Of course, much of it is rough and scratchy. A surprising amount of the footage is in fairly good shape with detail that is quite shocking. There are also plenty of photographs. All of this more than depicts the war itself. We get a window into what life was like in Europe leading up to the war. Of course, too much of it is reused. That’s obvious when you binge-watch the series more than it likely was at the time of its broadcast. There is also later footage of interviews with many of the participants from films, likely made in the 1950’s or 1960’s. One of the more interesting episodes deals with the birth of flight in warfare, and some of that footage is the most compelling.

We call the World War II fighters The Greatest Generation. Without taking anything away from those brave men and women, it’s time that the soldiers of The First World War were given their due. Over 30 million were killed over four years. A year later Europe would lose another 20 million to the flu epidemic. Another 30 million would leave for America in those same years. Imagine a population that loses 80 million people in half a decade. It’s almost unimaginable there was a fighting force to be had to do it all over again 20 years later. World War I and II is a perfect example of history repeating itself. Maybe it’s time to learn the lessons here and now. This collection isn’t a bad way to start. You get 10 episodes on two discs with no bonus features. It’s a nice window into “a decisive turning point in world history”.

Gino Sassani is a member of the Southeastern Film Critic's Association (SEFCA). He is a film and television critic based in Tampa, Florida. He's also the Senior Editor here at Upcomingdiscs. Gino started reviewing films in the early 1990's as a segment of his local television show Focus. He's an award-winning recording artist for Omega Records. Gino is currently working on his 8th album Merchants & Mercenaries. Gino took over Upcomingdiscs Dec 1, 2008. He works out of a home theater he calls The Reel World. Favorite films: The Godfather, The Godfather Part II, The Body Snatcher (Val Lewton film with Karloff and Lugosi, not the pod people film), Unforgiven, Gladiator, The Lion King, Jaws, Son Of Frankenstein, The Good, The Bad And The Ugly, and Monsters, Inc.
Keeping Faith Series 1 (Blu-ray) Tuesday Round Up: August 7, 2018