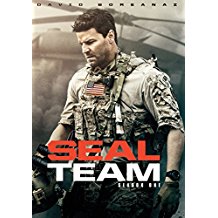 What David Boreanaz does is create iconic television characters. He has had no trouble getting work over the years. He has had the ability to jump from one successful series to another and enjoy longevity in those roles. Unlike many actors who have had big television roles, he doesn’t get at all pigeonholed or typecast. In Buffy The Vampire Slayer he originated the role of the vampire Angel, who spun off to his own series for several years. Immediately after that he took on the role of an FBI agent and partner to the title character on Bones. That job lasted a decade. Before the remains of Bones could be laid to rest, he was already working on his next new series. Now he’s the field leader of a Navy Seal team, and if the first season of Navy Seals is any indication, he’s going to be dodging bullets and RPG’s for the foreseeable future. CBS has a big tradition of long-running shows, and I wouldn’t be surprised if a decade from now I’m talking to you about the 10th season of Seal Team.

David Boreanaz plays Jason Hayes. Hayes is the field commander for a Tier 1 seal team coded Bravo Unit. These are guys who are always on call for covert ops missions. While the majority of their missions occur in the Middle East hunting down terrorists, they could be called for anywhere in the world and at any time. As the season begins, one of the ops didn’t go completely according to plan, and the team loses a valuable member. For these guys this isn’t just a coworker. He’s family, and Hayes carries around more than a little guilt for the loss. Fellow vampire actor Daniel Gillies from The Originals plays Nick Massey, who goes down in the mission. It’s not the last we’ll see of him because of Hayes’s guilt and memories where we see their relationship in flashbacks.

Jason’s second in command is Ray Perry, played by Neil Brown Jr. He has a new child on the way and is hiding an injury that could put the team in danger. His actions do lead to some serious consequences during this first season. A.J. Buckley plays Sonny Quinn. He’s the contradiction and often humor of the team. While he’s the big muscle guy and a tough fighter, he also has a lot of phobias, which include spiders and heights, which are often unavoidable, particularly for a guy who jumps out of airplanes for a living, sometimes in thick jungles. Justin Melnick plays Brock who handles the team’s explosive sniffing German shepherd named Cerberus, who is played by Dita the Hair Missile Dog, who actually does get credit in the show. Melnick actually owns Dita and is the dog’s actual trainer, which works out well on the show.

The team is supported by an overwatch group who sit in a high-tech control room and assist with the missions. The commander of the unit is Lt. Commander Eric Blackburn, who is played by Judd Lormand. He’s responsible for looking out for the team and giving the orders while Hayes commands on the ground. Toni Trucks plays Lt. Davis, who is the team’s equipment and tactical tech provider. She gets them the guns and toys they need to do their jobs. In overwatch is also CIA Agent Mandy Ellis, played by Jessica Pare. It’s her job to get the intelligence for the missions, and she provides liaison with CIA personnel and resources in the field.

Of course, the team is down a member, and the series handles this in an interesting way. In the first episode they use a Tier 3 team leader who is training to move up to Tier 1. He’s Clay Spencer, played by Max Theiriot. He’s cocky and a bit too sure of himself. After that mission the show cuts away from the main action as we follow his progress in training. He’s not popular, because his dad was a seal who wrote a tell-all book when he retired. But he’s a highly qualified guy who appears destined for Bravo Team. You know it. The team knows it. Spencer knows it, but for half of the season they play coy with the situation, because Hayes has some concerns about the kid. As it turns out there’s a kind of NFL-draft-style selection process when each new group graduates the advanced training. Bravo team gets first pick this year, and we all know where that leads long before it happens.

The episodes are action-packed, to be sure. The show’s ability to do battles on a television budget that look this good from week to week is pretty amazing. There’s plenty of battle action with explosions and helicopters and all sorts of operations. Many of the shows are ripped directly from real stories. The first op is an extraction that feels exactly like the one that got Osama. There’s a traitor who walked away from his post who now has to be traded for terrorist captives that recalls the story of Terry Bergdahl quite closely. You will absolutely recognize some of these stories. The episodes also take some time to look at the impact on the families of the team members and how they deal with this kind of lifestyle. It puts a lot of pressure on Hayes, who has a wife and kids who he ends up getting separated from when his wife doesn’t want to deal with this anymore.

The first half of the season deals with individual ops that come along. At about halfway through the year the team gets deployed for a tour of duty and remains stationed at a Middle Eastern base from which they operate. The deployment is a hard one from the start when they are called up early because one of the teams was ambushed and killed. The final episodes put the team in a desperate situation, and the show ends with their return home. But it’s clear that next season the challenge for Hayes is going to be dealing with PSTD. We get just the first hints of it along with a potential drug dependence. There’s no slowing down, and watching these discs will get you ramped up for more. The release includes the traditional CBS half-hour season breakdown. There’s a gag reel, a profile on the dog, and a set/location feature. The show certainly gives you an appreciation for what some folks do to keep us safe so that we can live relatively comfortable lives. It sure hit home for me. You see, “They risk lives. I write stuff.”

Gino Sassani is a member of the Southeastern Film Critic's Association (SEFCA). He is a film and television critic based in Tampa, Florida. He's also the Senior Editor here at Upcomingdiscs. Gino started reviewing films in the early 1990's as a segment of his local television show Focus. He's an award-winning recording artist for Omega Records. Gino is currently working on his 8th album Merchants & Mercenaries. Gino took over Upcomingdiscs Dec 1, 2008. He works out of a home theater he calls The Reel World. Favorite films: The Godfather, The Godfather Part II, The Body Snatcher (Val Lewton film with Karloff and Lugosi, not the pod people film), Unforgiven, Gladiator, The Lion King, Jaws, Son Of Frankenstein, The Good, The Bad And The Ugly, and Monsters, Inc.
Tuesday Round Up: August 14, 2018 Arrow: The Complete Sixth Season (Blu-ray)