Posted in: Disc Reviews by Gino Sassani on August 15th, 2018 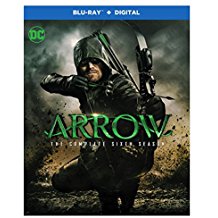 “My name is Oliver Queen. After five years in hell, I returned home with only one goal: to save my city. Today I fight that war on two fronts. By day, I lead Star City as its mayor. But by night, I am someone else. I am something else. I am the Green Arrow…”

Who the heck is this Green Arrow of whom you speak? If that’s your first question, you need to go back a couple of grades and catch up with the rest of us. The comics are good place to begin, but the television universe is its own place and not tied so tightly to the DC comic book universe. Your best place to go to catch up would be the first five seasons. It’ll be worth the effort, and I can get you started with those reviews found here. This review will not contain spoilers from the sixth season but very well must contain some from the previous year. So if you’re not caught up, do that first.

At the end of Season 5 we saw Oliver (Amell) put in an almost impossible situation. He has just met a son, William (Moore) that he didn’t know he had, and the old island explodes with plenty of friends and family still there. He watches safely from a ship, but the season ends with us not knowing who, if anyone, survived the devastation. Season 6 begins five months after the island explosion. William is now home with Oliver but understandably damaged and reserved. It’s already business as usual for Team Arrow, as a new threat has begun to put Star City at risk. As we see team members and characters in action, we understand pretty quickly that most of them did indeed survive. But there are no immediate answers. So how are we going to fill in the blanks?

Actually, the series fills in those blanks with a clever adjustment to a traditional element of Arrow storytelling. The huge question going into this season would be the use of flashbacks. Fans know that the flashbacks were five years into the past and involved his time on the island and eventually several extra-island activities that all helped to shape the Oliver Queen who takes center stage on the show. Now, with Arrow entering into its sixth season, those flashbacks present a new challenge, and, for at least the first episode that challenge is answered by flashbacks not five years ago but five months. Throughout the first episode we learn what happened on the island immediately before and after the explosion. From that point the flashbacks disappear for a while and make a return when Slade Wilson (Bennett) asks Oliver to help him find his own son. These flashbacks offer some of Slade’s best emotional moments as he remembers his time with his young son. These episodes also bring full circle the relationship evolution between Oliver and Wade and offer a bit of a nice break from the season’s overall story arc.

The big bad this year is a welcome return of Person Of Interest’s Michael Emerson as Clayden James. We met him earlier as a hacker who influenced a young Felicity (Rickards), but he was a hacker genius with good intentions. Now he believes that Oliver has killed his son and puts together a powerful villain team to seek his revenge on the city. Of course, Emerson’s character on Person Of Interest was a super computer hacker. Here he is far more single-minded. His team includes the return of Katie Cassidy this time as Black Siren. Stargate: Atlantis’s David Nykl returns as Russian mobster Anatoly, and he blames Oliver for losing his position in that organization. Now he’s teamed up with James. The breakout villain in the gang is also a Stargate alumnus, Kirk Acevedo as Ricardo Diaz.

This formidable collection of foes does more that threaten Star City. They manage to bring about great tension and turmoil inside Team Arrow. Now, to be honest, the series has overplayed this theme a little bit already. Granted it brings the show a good deal of its drama and emotional beats, but the team has split up before, and the idea of isolating Oliver is not a new element at all. The gang also manage to out Oliver, which does bring some new drama to the season. Yeah, he’s been outed before and has had to scramble to get out of it, but it won’t be so easy this time, because Diaz has a lot of the cops and city government officials on his payroll. I will tell you that this reveal will have lasting consequences for the team and the show going forward. It will also set up the big season cliffhanger and how Season 7 must necessarily begin.

One of the consequences of that already playing out in this release is Diggle (Ramsey) taking on the hood as he had before when Oliver’s secret was in danger. This time he’s hiding an injury that will lead to dire consequences and be a big part of the internal tension. It puts the team in danger, and a secondary theme of the season is everyone questioning his leadership ability. Three members of Team Arrow attempt to form their own team, and eventually there’s that classic comic book clash between heroes that leads to tragedy. Juliana Harkavy continues to develop into the more interesting of the three disgruntled teammates. She’s awful good in the role and has an emotional range that gets used to perfect advantage this season. Echo Kellum continues to be solid as Curtis, and the same can be said for Rick Gonzales as Rene. But Harkavy steals every scene she’s in.

The first half of the season is an improvement over the previous couple of years where I felt the series was in somewhat of a decline. The second half of the season has the Diaz character rise above the rest as the biggest threat of the season. Certainly, there are some big moments and tons of drama, but I never really buy that Diaz has this much influence and too easily inserts himself into the world’s most elite criminal empire. We just don’t get enough evidence to completely believe it. It doesn’t help that Acevedo is doing a really obvious Al Pacino imitation throughout the season that appears to get worse as the season goes on. And he’s not done yet. The Diaz arc isn’t going to be resolved this season and will certainly be a big factor into next season. Look, I love Acevedo. I was bummed he never got more time on Stargate SG1, but he really needs to tone it down going forward.

Of course, there is another traditional crossover even across the four shows. I have to offer HUGE kudos to Warner Brothers this year. Every year I have complained that you only got that show’s episode on each set. The problem with that was they didn’t necessarily release the sets in crossover order, and you had to buy all four titles to have the entire story. This year Warner listened to the fans. You get the ENTIRE crossover event, and in the proper order. I can’t emphasize enough how big of a give this is to the fans who can save money not having to buy the sets they might not want or be able to afford. It’s also the best way to see the event. Whoever made that decision at Warner deserves a big raise and the thanks of the fans of these shows. Good job!

Look for some nice cameo returns of loved characters during the season. Colton Haynes returns for a couple of episodes as Roy, which will tie into the loss of Willa Holland, who pulled limited duty this season as Thea and is leaving the show for keeps now. You couldn’t have as season without at least a grin from John Barrowman as Merlin. You get 26 episodes on 4 discs.

Each episode is presented in its original aspect ratio of 1.78:1. The 1080p image is arrived at with an AVC MPEG-4 codec. Black levels are absolutely vital in this high-definition image presentation. So much of the action happens on rainy nights and in the shadows. Fortunately there’s solid shadow definition here, or this could well be a bloody mess to try to make out. When colors need to stand out, they do. Look more for contrast and textures to replace shiny surfaces.

There are no deleted scenes or commentaries this season. Warner has cut back on the extras. I suspect it’s a tradeoff for providing the entire crossover event. If that is indeed the case, I think it’s a very good trade.

The Split Of A Man – Deathstroke: (11:48) This feature gives us a nice look at the evolution of Slade Wilson and his relationship with Oliver.

Inside The Crossover – Crisis On Earth X: (42:00) This is likely going to be repeated on all four sets. It’s a nice discussion with a member from each show’s production team. We get a ton of insight into how the shows cooperate and the choices that are made for what show does which segment. This is just guys talking, but it ends up providing so much insight into not only this episode but the process. I really enjoyed this more than most features.

Revenge In Ones And Zeroes – The Story Of Clayden James: (10:52) this is a character profile on the season’s opening big bad. I suspect Diaz will be profiled next season.

The Best Of DCTV Comic-Con Panels At San Diego 2017: (58:27) Instead of the usual panels on each release this is a compilation of all four in one feature. Again I suspect it will be included with the other sets.

I think it is possible that Arrow is on its way back from the mediocre years, and we just might be able to look back at this season for the first inklings of a better show. “Time for the next phase.”

Gino Sassani is a member of the Southeastern Film Critic's Association (SEFCA). He is a film and television critic based in Tampa, Florida. He's also the Senior Editor here at Upcomingdiscs. Gino started reviewing films in the early 1990's as a segment of his local television show Focus. He's an award-winning recording artist for Omega Records. Gino is currently working on his 8th album Merchants & Mercenaries. Gino took over Upcomingdiscs Dec 1, 2008. He works out of a home theater he calls The Reel World. Favorite films: The Godfather, The Godfather Part II, The Body Snatcher (Val Lewton film with Karloff and Lugosi, not the pod people film), Unforgiven, Gladiator, The Lion King, Jaws, Son Of Frankenstein, The Good, The Bad And The Ugly, and Monsters, Inc.
SEAL Team: Season One Predator: 3 Movie Collection (UHD Blu-ray) (4K)