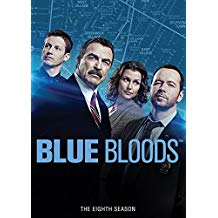 For eight years Blue Bloods has been a staple on CBS, giving Tom Selleck a chance to completely redefine his television career. The once cocky and carefree Magnum P.I. now has established himself as the wise patriarch. It’s a transition that a 1970’s audience would never have bought. But now he’s become a new kind of airwaves icon. The show has also managed to make it through eight years with very little change in the cast, and most of that coming from additions. This season is the first for the show to lose one of the major players and a rather beloved character on the show. Instead of making the season weaker, I think this might well be one of the strongest yet for the series.

Amy Carlson leaves the show, so the season begins with the Reagan family mourning the loss of her character, Linda. It turns into quite an emotional season for the cast. Of course, Danny (Wahlberg) is hit the hardest. Throughout the season he has to deal with a ton and anger over Linda’s death. He also starts to question his life as a police detective. He starts to second guess his decisions and be a bit gun-shy about dangerous positions. He’s dealing with having to be the single parent for his kids, both financially and for safety. He’s going to need the help of his family, and that’s what makes Blue Bloods the kind of show that it is. It’s a cop show, but it is more a series about this family. There’s always a lot of emotional stuff here, but this season goes above and beyond the call of duty.

In many ways Danny’s life has now become even more of a mirror to that of his father. Frank (Selleck) followed in his father’s footsteps to eventually be the Chief of Police. He also had to deal with the loss of his wife and raising kids as a single cop. Obviously, that kind of a story wasn’t planned, but since Carlson’s decision to leave it becomes a focal point for the show. Should the series stick around long enough, it’s not hard to see Danny taking over the department.

A lot of the best stuff from the season comes from the performances of the strong cast. But both Tom Selleck and Donnie Wahlberg hit it out of the park every year. Wahlberg in particular gets to be the focus of the season and carries the huge emotional season arc with compelling strength. This is the best I’ve seen the actor to date.

The season is not just about Danny. Frank has to deal with a new temporary mayor, played by feisty star Lorraine Bracco, yet another Sopranos star to join the series. The two will clash and nearly cost Frank his job. Sami Gayle gets to see her character of Nicky come of age this season. She’s struggling with her identity as part of this public family. She also has to deal with a sensitive situation when she finds herself a victim this season. Speaking of coming of age, it’s hard to imagine that when the series started the youngest of Frank’s sons, Jamie, was starting out as a rookie. Now he’s an eight-year veteran and quite an experienced officer. He delivers a baby this season and hooks up with his partner to get engaged. It’s not hard to see these eight years very much through his eyes. Erin (Moynahan) is the dominant female character who has no trouble holding her own in this law family. She flirts a bit with her ex-husband and finds herself filling a role for her brother, now a single dad. Even Grandpa Reagan (Cariou) gets caught up in the action as he saves someone from an out of control car that flies into a building. I actually have some experience in that department, and it’s scary as hell.

Each week there is the traditional case-of-the-week format. The cases get played out pretty much the way a normal cop show might play, and then there is the family dynamic. Cases might cause friction and stress between the family members. Here is where the performances and strong characters make this a very different show from the rest of the police dramas out there. There’s just enough of the mythology arc to keep things interesting. The stories are usually standalone, and you will enjoy this slightly different take on the cop show.

This release gives you all 22 episodes on six discs. Extras include a gag reel, deleted scenes, and an f/x feature. You get pilot episodes of Bull and Navy Seals. It’s a solid season that absolutely leaves you wanting more. I expect that will be true for many years, and I’ll be watching these episodes for a long time to report back to you guys. You know what? “There’s no place I’d rather be.”

Gino Sassani is a member of the Southeastern Film Critic's Association (SEFCA). He is a film and television critic based in Tampa, Florida. He's also the Senior Editor here at Upcomingdiscs. Gino started reviewing films in the early 1990's as a segment of his local television show Focus. He's an award-winning recording artist for Omega Records. Gino is currently working on his 8th album Merchants & Mercenaries. Gino took over Upcomingdiscs Dec 1, 2008. He works out of a home theater he calls The Reel World. Favorite films: The Godfather, The Godfather Part II, The Body Snatcher (Val Lewton film with Karloff and Lugosi, not the pod people film), Unforgiven, Gladiator, The Lion King, Jaws, Son Of Frankenstein, The Good, The Bad And The Ugly, and Monsters, Inc.
Blindspot: Season 3 Gotham: The Complete Fourth Season (Blu-ray)