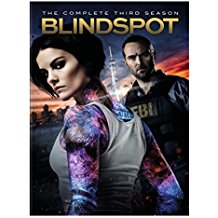 “There’s been a new development.”

Actually there have been many. But first I have to credit Blindspot’s creator Martin Gero with providing one of the more memorable moments on television with the opening minutes of the series in the first season. We see a police officer in Times Square approach a bag with a sign on it that asks the FBI be alerted. The cop approaches the bag a bit frightened it might be a bomb and blow up on him at any time. It could have been a nice iconic moment when he opens the bag to reveal a naked woman who is covered with tattoos. She is shivering as the camera pulls back to reveal the emptied Times Square.

Now we’re in the third season, and things just get more frantic. The Season Two finale previewed what was coming in its final moments. Jane (Alexander) and Kurt (Stapleton) appear to have their happily-ever-after wedding and life away from all of the danger, but it comes knocking. There’s a huge bounty on Jane’s head, and she leaves to protect Kurt. Of course he searches, and 18 months later they reunite to find that there is an entire new set of tattoos on Jane that are activated by a special device that makes them illuminate like a 70’s poster under a black light.

A lot of things have changed in that 18 months. Reade (Brown) is now in charge of the unit under the direction of Director Hirst (Masterson). Zapata (Esparza) has left to join the CIA. Patterson (Johnson) has gone out on her own and made millions off of a mobile app/game. Rich Dotcom (Esner) is now on a work furlough from prison working with the team. When Kurt and Jane show up with the new tattoos, the team comes back together to solve the new puzzles.

But things aren’t quite the same. Roman (Mitchell), Jane’s lunatic brother, is the one who planted them and is leading the team around to participate in his agenda. This time tattoos lead back to secrets that members of the team are hiding, and the tension gets as bad as it’s been. Meanwhile Roman has killed a rich guy and has assumed his identity to get close to a crime family through Blake Crawford (Anderson), who has been manipulated into falling in love with him, and her father, Hank Crawford, played by the excellent David Morse. In fact Morse is a much better villain than Roman, who appears to flutter too much back and forth on what he really wants. Hank Crawford is the best and unfortunately underused big bad who would have served the season better as the more dominant foe. I really feel like the Roman character has gone as far as he can, and the writers appeared to be pushing it to drive his story for the entire 22-episode run.

The show returns to the mole-in-the-department story that exhibits some lazy story-telling, to be sure. The show is at its best when it stays away from the team’s inner turmoil and throws the kind of pulse-pounding action at us that is really where everyone shines. There are the expected huge stakes that lead to bio-weapons and nukes falling into the wrong hands. The series can still be quite compelling, and the cast is strong, but they are beginning to return to the same well too often. It was a nice clever plot device to add the new tats, and there are plenty of those tattoo-of-the-week kind of stories. But Kurt and Jane split up and get back together too often. Fortunately we’re talking very strong leads that keep us watching even when events start to get a bit too predictable. There’s a rather clever episode where Patterson is repeating a day over and over that keeps ending in disaster. It’s been done too often before, but it is a fun episode, that is until they do almost the exact same thing four episodes later where a story is told from the same repeating starting point, but by each character’s point of view. It’s my biggest complaint on the show. The writers are repeating themselves too often for a show only in its third season.

The show does deliver the goods with some rather sweet stunts and solid production values. Set pieces are often large, as are locations. But none of this makes the show what it is. It’s the casting of the two leads which makes this series above average. Jaimie Alexander is the perfect choice for Jane. She has the ability to convey a vulnerability that comes from her having her life torn from her memories, yet still be a very strong female character. Alexander somehow delivers both, often at the same time. Of course, there wasn’t much doubt that she could pull off the action parts of the role. After all, she fought alongside Thor, right? It’s a compelling performance that manages to suck you into the drama of it all.

The same goes for Sullivan Stapleton as Kurt. Fresh from his four-year gig on Strike Back, he’s a tough, edgy warrior who can pull off the emotional stuff without bringing us down into some kind of soap-opera acting. Seeing his cameo with the new Strike Back team certainly accented how huge he was for that show. He still has a little trouble keeping the Aussie accent at bay from time to time, but he’s a solid actor, and the two share some remarkable chemistry in just a short period of time. Credit Gero for keeping the relationship complicated. Just when it seems they’ve gotten beyond one hurdle, there’s another, and the relationship constantly shifts from one of trust to hostility. Stapleton goes on a bit of an emotional rollercoaster ride here, and he does a fine job of bringing us along for those ups and downs.

There are some bright moments with the rest of the cast. One of the best in-jokes ever happens when we discover that Patterson’s dad is the real-life Bill Nye the Science Guy. He complains that his fictional wife is collaborating on a paper with a man he calls his archnemesis, named Dr. Rodney McKay. Of course, Nye appeared on an episode of Stargate: Atlantis where McKay, played by David Hewlett, accuses Nye of stealing his ideas. So is Blindspot officially in the same universe as Stargate? Wouldn’t that be cool? Of course, creator Martin Gero was a huge part of the production staff at Stargate. So this wasn’t a small coincidence. I’m looking forward to maybe actually seeing McKay show up in the series.

Jamie Alexander is actually pretty lucky that this show has continued. Otherwise she would have appeared in the last Thor film, where she likely would have been killed off with the rest of Thor’s buddies. Now we at least have a chance to see Lady Sif again.

The show gives us 22 episodes on four discs. Warner needs to cut back a bit and add an extra disc in the future. Six episodes per DVD is too many, and that leads to compression artifact which isn’t necessary these days at all. Extras include a gag reel, a Zapata character profile, and deleted scenes. I’m looking forward to Season 4 with the hope that a refreshed writing staff will be a bit more original this time. It might be wishful thinking. “Old habits die hard.”

Gino Sassani is a member of the Southeastern Film Critic's Association (SEFCA). He is a film and television critic based in Tampa, Florida. He's also the Senior Editor here at Upcomingdiscs. Gino started reviewing films in the early 1990's as a segment of his local television show Focus. He's an award-winning recording artist for Omega Records. Gino is currently working on his 8th album Merchants & Mercenaries. Gino took over Upcomingdiscs Dec 1, 2008. He works out of a home theater he calls The Reel World. Favorite films: The Godfather, The Godfather Part II, The Body Snatcher (Val Lewton film with Karloff and Lugosi, not the pod people film), Unforgiven, Gladiator, The Lion King, Jaws, Son Of Frankenstein, The Good, The Bad And The Ugly, and Monsters, Inc.
Tuesday Round Up: August 21, 2018 Blue Bloods: The Eighth Season