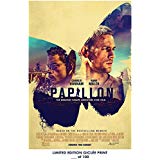 Too often the word classic is overused and often misunderstood. When I hear or read a critic calling a new film a classic, my blood boils a bit. I often say that the only thing wrong with instant gratification is that it takes too damn long. It takes the endurance of time to define a classic. There must be some lasting effect on a culture. The 1973 Steve McQueen and Dustin Hoffman film Papillon fits that description, in my not-so-humble opinion. It’s a film that had a strong impact upon me when I saw it so many years ago and is one of a dozen films I try to watch at least once a year or so. Because of those vivid images that remain with us so long, classics are bad choices for a remake unless there is truly something more that can be done with the material. Often it’s a technical breakthrough that just wasn’t possible when the film was first released. But even that rarely is reason enough. Today we can do photo-perfect images that sure beat the heck out of that constantly malfunctioning shark in Jaws, but still no shark film has ever come close to capturing the same impact. With Papillon the draw is that the second book written by Henri “Papillon” Cherriere is reported to have supplied additional material for the remake of Papillon. It wasn’t enough.

The story is essentially the same. Cherriere (Hunnam) is charged with a murder he claims not to have committed and is sent to the infamous early 20th Century French prison in French Guiana where he experiences primitive conditions and inhuman treatment and from where he manages a daring and unprecedented escape. The additional material is quite scarce. This time we see how Cherriere was set up and arrested. That provides about 10 minutes of the film’s opening act. The rest is a couple of minutes in the form of a coda where he returns to France as an old man to sell his story to a French publisher. The rest is pretty much all to be found in the original film.

The first problem I had with the film is not what it added but what it has taken away from the story. Gone is the near-silent but compelling moments where Cherriere is in a native camp. Worse is the removal of his encounters at the leper colony on Devil’s Island. The film also jumps ahead in the final moments and skips over Dega’s (Malek) life he’s built on the island where inmates are kept after their actual prison sentences. This is the island where Cherriere makes his escape and we are thrust completely toward that final act of the original film. These are crucial moments that bring us closer to these characters and provide important emotional beats in the original film. I find their exclusion here to be sins of the mortal variety.

The actors provide a study in contrast of performers. Charles Hunnam isn’t Steve McQueen, and I give credit to the actor for avoiding an imitation. That would have been disastrous. Instead he settles for just bad. I seem to love a lot of things that Hunnam has been in. I’m a huge fan of Sons Of Anarchy, but you see, he was always the weak link. But he was surrounded by powerful writing and very good co-stars. Here he must carry half the burden, and he comes off wooden and far short of the mark.

But the news is not all bad. Rami Malek delivers an Oscar-worthy performance as Dega. Again, he’s not Dustin Hoffman, and he doesn’t try to be. What he does accomplish is a character very much his own that dominates the film at almost every moment. Malek is a strong presence and a remarkable actor. I am anticipating his portrayal of Queen front-man Freddie Mercury in November.

The film does benefit from an extraordinary production design. The film is simply beautiful to watch even in its brutality. The cinematography is better than that of the original, and the locations offer some striking visuals. There is a decidedly strong attention to every detail, and often it’s that element that is compelling throughout. I wish that that could have been enough. I deliberately avoided watching the original before the screening. Still, I was haunted too often by the strong impact of that film as I watched this one. You could say that’s another ingredient to a classic, but it works badly for this film. I think the movie will work better for an audience that hasn’t experienced that first film. For a little over two hours I wish that I, too could have “unwatched” the original. This version will never be mistaken for a classic, and I suspect its memory will not be lasting. In 20 years when someone mentions Papillon, I think it will be the 1973 film that will jump into your head.

There has been some argument from the film’s folks that this is not a remake. Unfortunately, even the credits admit it’s based on the first film’s screenplay as well as the books. Guess what, folks. That’s what we call in my business a remake. “Won’t last long.”

Gino Sassani is a member of the Southeastern Film Critic's Association (SEFCA). He is a film and television critic based in Tampa, Florida. He's also the Senior Editor here at Upcomingdiscs. Gino started reviewing films in the early 1990's as a segment of his local television show Focus. He's an award-winning recording artist for Omega Records. Gino is currently working on his 8th album Merchants & Mercenaries. Gino took over Upcomingdiscs Dec 1, 2008. He works out of a home theater he calls The Reel World. Favorite films: The Godfather, The Godfather Part II, The Body Snatcher (Val Lewton film with Karloff and Lugosi, not the pod people film), Unforgiven, Gladiator, The Lion King, Jaws, Son Of Frankenstein, The Good, The Bad And The Ugly, and Monsters, Inc.
Deadpool 2 The Super Duper $@%!#& Cut (UHD Blu-ray) (4K) First Reformed (Blu-ray)