Posted in: Disc Reviews by Brent Lorentson on August 27th, 2018 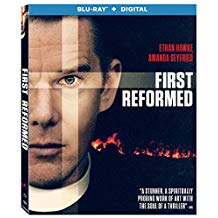 When it comes to Paul Schrader, I feel the argument can be made that he is the greatest American screenwriter.  I know it’s a bold statement but when you look over his credits that include Taxi Driver, Rolling Thunder, Hardcore, Raging Bull, The Last Temptation of Christ and so many others I feel there just isn’t anyone out there that can compete.  Lately though he’s seemed to have had a difficult time recapturing that greatness, there has even been a part of me that has felt that perhaps I should give up on hoping he’ll crank out one more great film and simply appreciate the filmography he’s delivered us cinema fans over the years. Paul Schrader, despite having some classic titles to his name he’s still a writer and a director that isn’t for everyone.  His films typically are dark in tone and typically shine a light onto the underbelly of society that most would prefer to not know about.  It’s because of his fearlessness in tackling these subjects that has made me a fan of his for years so when the opportunity to see First Reformed came along I didn’t hesitate, this was a screening I couldn’t miss.

As the film opens we get a long shot that pushes in to an old church, we quickly find out the church is named First Reformed.  Inside we meet Reverend Toller (Ethan Hawke) as he is delivering a sermon to a very sparse crowd of parishioners.  It doesn’t take long to realize that Toller is a damaged man, both physically, emotionally and spiritually.  We get insight into the reverends thoughts through his journal entries that he writes and are narrated for us.  Things get moving when Mary (Amanda Seyfried) approaches Toller after a service and requests he speaks with her husband Michael (Philip Ettinger) who she fears wants her to have an abortion.

When Toller meets with Michael, we discover that Michael is an activist that has given up on the future of the world and believes it is unfair to bring a child into a world where the planet is on the eve of destruction from mankind.  What follows is a brilliantly written dialogue exchange between the two men about faith and things get pretty grim from this point on.  What makes matters worse, later Mary reaches out to Toller again only this time it’s to show him that she found a suicide vest that her husband had stashed away.

Toller is also busy with preparations for the 250 year anniversary of First Reformed church.  The church is given the nickname “the souvenir shop”, because it’s basically nothing more than a tourist stop that has a small gift shop, while thousands of members of the congregation prefer to attend the larger church ran by Pastor Jeffers (Cedric The Entertainer).  Here is where we get to see Toller as a man that is clinging to traditions and his faith, while he is visits Jeffers who treats the church as a business.

While Michael has lost his faith in his cause to attempt to save the planet, Toller continues to slide into despair as his faith and health continue to fail him.  The more Toller gets to know about Michael and interacts with Mary he seems to empathize more and more with the activist.  When Toller discovers that a local business man who is responsible for a lot of pollution is trying to control the 250th celebration, it seems to be too much for Toller.

This was a film that had people divided, while on one end of the spectrum  they were calling this the follow up to Al Gore’s Inconvenient Truth and then there was my side of the coin where I saw this as more of a struggle about faith.  While I can see where other people can take this as a jab at right-wing corporations and just attempting to inject fear about the pollution in the world, I simply saw something else.  Sure there is plenty of talk about the pollution in the world but I saw this as nothing more than the perspective that Michael had and his struggle.  I feel we needed to see Michael’s perspective in such an in your face manner that when he’s lost his faith in being an activist and him wanting a suicide vest was his form of wanting to be a martyr for his cause. Martyrdom does play a factor in this film but it certainly takes a unique and grisly twist here.

Ethan Hawke delivers one of his best performances, it’s subtle and restrained and I wouldn’t be surprised if he picks up a nomination for this performance.  As for the rest of the film I feel this is one of those divisive films that you’ll either love or hate but however you feel it will be a strong feeling about it.  The discussion in the theater lobby about this film and hearing the varied feelings and expressions about what it meant is why I feel this film works.  No one is having deep conversations about Deadpool 2 or Solo, but to be fair First Reformed won’t be making that kind of box office either.

First Reformed is presented in the aspect ratio 1.33:1.  The 1080p image is arrived at with an AVC MPEG-4 codec at an average of 18 mbps.  The first thing you’ll notice is how the film was shot, it’s a throwback to the old dimensions used in film in the early days of cinema.  Schrader goes a step further with his unique direction and keeps the film relatively static; the use of little camera movement gives the film a more tedious feel but remains very composed putting the emphasis on the characters and the performances.  There is a lack of color that seems to pop on the screen; instead it has a grey and dreary look that has me curious what this film could have looked like if it were shot in black and white.  While the skin tones seem to remain natural in the cold setting, the black levels are deep and considering the amount of snow in the picture never appears blown out as it still captures plenty of detail.  This isn’t a film that will wow people with its HD presentation, but the subdued look is appropriate for the film.  There were no compression issues that I could see.

The DTS- HD Master Audio 5.1 track is as subdued as the video.  A good portion of the film involves characters sitting down and talking together, with very little music to get in the way of the performances.  This is a film driven by dialogue and performances and the sound design is perfect for this.  If you were to watch the film in 2.0 I doubt there would be anything taken from the impact of the film.

(Audio Commentary with Writer/Director Paul Schrader)  This is one of the better audio commentaries I have listened to.  Despite being on his own, Schrader delivers an entertaining and informative track that covers numerous aspects of the film.  The man is a legend in the film industry and is full of so much knowledge on film that any film lover will enjoy listening to the track.

Discernment: Contemplating First Reformed: (15:43) Basically this is your standard BTS interviews mixed with footage of the production with the cast and director.

Having watched the film a second time now, this film continues to stick with me.  I understand why this wasn’t a box office success but there are moments in this film that are incredible and a reminder that Paul Schrader is still a great screenwriter.  This is the kind of film where you’ll come away with your own opinions about what it was about and there is nothing wrong with that, sometimes an audience needs to not be spoon fed a film and should reflect upon its meaning and purpose on their own.

Brent Lorentson is a horror writer and film critic based out of Tampa, Florida. With a BA in Digital Film, he co-wrote and co-directed Scavenger Hunt. His short stories have appeared in various horror anthologies. In 2019 his short script Fertile Blood will be a part of the anthology horror film Slumber Party. He is currently working on his first novel A Dark and Secret Place set to be released in late 2019. Favorite Films: Taxi Driver, Fight Club, I Saw the Devil, The Wild Bunch, Dawn of the Dead, A Clockwork Orange, Pulp Fiction, Heathers, The Monster Squad, and High Fidelity.
Papillon (2018) Tuesday Round Up: August 28, 2018