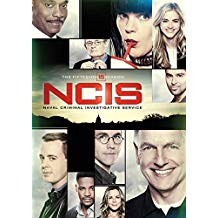 NCIS is about to enter into its 16th season in just a short time. That in itself is a remarkable accomplishment in the days of short attention spans and hundreds of shows to keep that attention. What is more remarkable is that it continues to be the number one drama in the world. What could a series possibly have left to say after 15 years? Apparently, the answer to that question is: a lot. One of the reasons the series has stayed so strong for so long is the cast. And while it has changed considerably over that time, new members are brought in who always seem to fit into that comfortable family that makes up the appeal of the series. This show has become like that ragged, threadbare shirt that you can’t quite part with. Comfort is the key here, and it doesn’t appear to be going away any time soon. CBS’s release of NCIS: The Complete 15th Season allows you to get caught up just in time.

This season is yet another changing of the guard for the show. It is the last season for Duane Henry as Clayton Reeves, the MI6 agent who has been working with the team. I have to admit that he never quite grew on me, and I’m not all that sad to see him go. He was too much James Bond and not enough…well…comfort. The same can’t be said for the departure of Pauley Perrette as Abby. She’s been a very important character for the show and a lot of the team’s emotional center. Paired with the fact that the actress left under terms that weren’t so friendly, this is a big blow to the series. She has publically claimed that she felt unsafe on the set and made some accusations that were a bit shrouded in a phrase “multiple physical assaults” that leave a huge question mark. The speculation turned to Mark Harmon’s dog being a potential menace on the set. Whatever the reason, it left a cloud and there had been a couple of years of feuding between her and Harmon. The lasting effect is that the characters don’t share a stage when they say goodbye. We meet her replacement for a couple of episodes this year, and the upcoming season just won’t be the same.

There is also a semi-departure that starts with Season 15. David McCallum is getting up there in years and actually commutes to the L.A. shot series from his home in New York. The grind was getting to the actor, and they worked out a deal for him to be in half the episodes each year, starting with this season. His willingness to go to such lengths to stay and Perrette’s issues appear to describe two different shows. Perrette has promised more will come out and sited a “big powerful machine” trying to silence her. Even with this stain, the show will continue.

With people leaving, there need to be new faces coming in. The big one this year is Maria Bello as Special Agent “Jack” Sloan. She’s not officially part of Gibbs’ team and answers to Vance (Carroll). She’s introduced in the second episode after the resolution of last year’s cliffhanger that found Gibbs (Harmon) and McGee (Murray) left behind in the Middle East. She’s a kind of foil for Gibbs this season. Her job is pretty much to help with profiles, and she has quite a lot of baggage that gets explored at a comfortable and slow pace that leads to the season finale when Sloan’s secret kind of explodes into another cliffhanger.

The season begins with one of the more edgy and emotional episodes in the show’s 15-year run. Both Mark Harmon and Sean Murray deliver powerful performances during their torture and captivity. Those events will also change both of these characters going forward in subtle ways. It only highlights the distance that McGee has come on this show. It’s hard to reconcile this veteran agent with the “probie” who used to be the target of Tony’s barbs. That’s a testament to the writers on this show as well as the evolution of Sean Murray as an actor. You want to really get a feel for what I’m talking about here? Watch his first episode early in the first season before you start this season, and you will be amazed. This is the second season without Tony, and while I miss that character a great deal, I think it has been good for both Murray and McGee.

It’s not that Tony is completely gone. His name comes up a few times, and the writers have managed to continue the back-and-forth barbs through their computer communications. Tony actually shows up in some flashbacks while Abby is in a coma for an episode. And Robert Wagner makes another appearance as Tony Sr. This time he actually gets to play the hero when the NCIS HQ is under attack. We also get another nice blast from the past. After 15 years it’s easy to forget that NCIS was a spinoff of the 10-year hit JAG. It’s pretty rare, but from time to time characters and their actors show up on the franchise. This season we re-connect with Bud, played once again by Patrick Labyorteaux. It’s a short cameo kind of thing, but it is quite nice to see the show return to its roots and remind us just where it all came from. Joe Spano continues his recurring role of Fornell. Spano and Harmon have a fantastic chemistry together, and it gets to play out rather nicely this season. It turns out that Fornell once planted evidence to catch a serial killer, and now Gibbs has to rat him out in court when the guy gets a retrial. Fornell is kicked out of the FBI, but turns up later to help the team as a private detective. In fact, I almost wish they’d consider a new spinoff with Fornell as a P.I., but I don’t think that’s in the cards. For us it’s an opportunity to see this relationship challenged and changed. Again the writers combined with the two actors have delivered some real emotional drama.

This season there is no crossover with any of the other members of the franchise. There is a bit of a crossover with The History Channel’s American Pickers. It turns out that both Ducky and Gibbs are fans of the show, and a piece of evidence turns up in an episode from a case they shared 16 years ago. That show’s Mike Wolfe plays himself as he helps Gibbs track down an old Viking weapon, and I’m not talking about Stefon Diggs.

Remember when all of the team members were scheming to get an apartment that was owned by serial killer Paul Triff, played maniacally by French Stewart? Remember McGee finding even more dead bodies under the floorboards? The curse of the apartment continues. Triff willing to help NCIS take down another killer, but one of his demands is to spend two nights in his old, and McGee’s new, apartment. Of course, it turns out to be a bad idea all the way around. This ends up being a two-part episode that was used as a cliffhanger over the show’s gap in airing during CBS’s coverage of the Olympics. One of the nice advantages to watching the show on DVD is that I didn’t have to wait two weeks for the resolution.

The show reached its 350th episode this season. You get all 24 episodes of season 15 on six discs. Extras include the requisite half-hour season wrap-up, a feature on the two-parter, a conversation with Harmon and Spano, and a profile on the Reeves character. There’s also a celebration feature of 15 years that focuses on the best moments in f/x and stunts over the years. Next year there will only be three characters that were with the show in its first season: Gibbs, McGee, and Ducky. It all started as a back-door pilot in the final season of JAG. “From there it spread like wildfire.“

Gino Sassani is a member of the Southeastern Film Critic's Association (SEFCA). He is a film and television critic based in Tampa, Florida. He's also the Senior Editor here at Upcomingdiscs. Gino started reviewing films in the early 1990's as a segment of his local television show Focus. He's an award-winning recording artist for Omega Records. Gino is currently working on his 8th album Merchants & Mercenaries. Gino took over Upcomingdiscs Dec 1, 2008. He works out of a home theater he calls The Reel World. Favorite films: The Godfather, The Godfather Part II, The Body Snatcher (Val Lewton film with Karloff and Lugosi, not the pod people film), Unforgiven, Gladiator, The Lion King, Jaws, Son Of Frankenstein, The Good, The Bad And The Ugly, and Monsters, Inc.
Tuesday Round Up: August 28, 2018 The Flash: The Complete Fourth Season (Blu-ray)