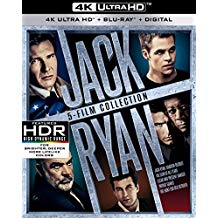 Since 1990, it’s taken four different actors to bring Jack Ryan to the big screen. This week, Tom Clancy’s CIA analyst arrives at UpcomingDiscs headquarters in UHD. Thanks to Paramount, we’ll be reviewing the Jack Ryan 5-Film Collection in 4K. Magnolia appeals to a Higher Power, while over on the small screen Warner speeds through The Flash: Season 4 and makes a deal with the devil in Lucifer: Season 3. Finally, CBS taps into its dark side with Criminal Minds: Season 13.

We’ve also got a theatrical release on the docket as a father goes on an online hunt for his missing teenage daughter in Warner’s Searching. One last reminder before signing off for the week: if you’re shopping for anything on Amazon and you do it through one of our links, it’ll help keep the lights on here at UpcomingDiscs. See ya next week!