Posted in: The Reel World by Gino Sassani on September 1st, 2018 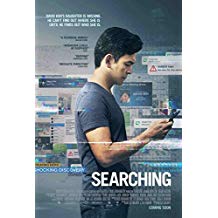 Social media, along with our growing number of mobile devices, are dominating our lives. Today it’s how we shop. It’s how we communicate. Hell, it’s how we date. For many of us, our devices have become how we see and experience the world around us. The new electronic culture has also changed our movie experience, as more and more films and television shows are going directly to our devices instead of our television and multiplex screens. It’s also changed the way films are made. Recently, I reviewed a film shot completely on an iPhone. It should come as no surprise that a film would come along that tells its entire story through the lenses of these devices. It’s a natural extension of the found-footage genre and has been used in many films already.  Searching delivers its entire story through the “eyes” of these devices. But this is more than a concept film. Searching gives us compelling drama and makes a significant emotional connection without ever breaking character. I found it to be a film with style and substance. That’s a rare combination, and so Searching is well worth the visit to your local cinema. That is, if you can put your devices down long enough to enjoy it.

As the film begins, we get to see the evolution of the Kim family through their social media posts, their video and photograph posts, and their communications. We watch Margot (La) grow from a young girl to a teenager. We share the triumphs and tragedies of their lives, particularly the loss of her mother, through these posts and snapshots. With videos and posts we spy on the family’s unfolding sorrow as Margot’s mother slowly succumbs to cancer. We get to see the dynamics of a father and daughter dealing with the loss, and all through the window of various electronic devices. One night Margot goes missing ,and her father (Cho) begins to investigate where she might have gone. We witness the moment when he realizes how much of his daughter’s online life he didn’t know. The unknown passwords and who her friends really were. David Kim becomes an internet detective as he peels away each layer of her life. And all of this is seen through the eyes of apps, database programs, and social media.

There is no question that Searching asks some very important questions. I think the movie will shock a lot of parents who aren’t quite this aware of how much they don’t know about their children. It’s a scary thought that is a unique nightmare of this age of the World Wide Web. You could feel it in our screening. There were moments of gasps from the audience, and you knew they were facing some stark realities as they watched this father struggle to find his daughter.

John Cho does an amazing job as the worried father. Star Trek’s newest Sulu has a difficult job to do here. He doesn’t have the luxury of a normal expanded performance. We only see him through these screenshots, but he does an awesome job of portraying his evolution of emotions from panic through anger. It’s so easy to take his performance for granted because of the film’s style. The tone of his voice when he’s using a cell phone or facetime video informs us of the emotions he can’t necessarily deliver in a traditional way. In fact, the best part of this film is how quickly the unique presentation dissolves away and you are drawn into the drama. This film provides a horrifying look at the reality of the world we live in. This film frightens because it echoes our new reality and its dangers so effectively. I’m certain that it will hit home and serve as a sobering wakeup call to both parents and their children.

It’s inevitable that the style of the film will be imitated, much as found-footage films are today. The style runs the danger of becoming too ordinary, and most of the folks trying to reproduce this will fail miserably. I’m already dreading the knockoffs that I’ll be forced to watch for the next decade. Hopefully, any filmmaker who is attempting to reproduce this film pays attention to what really makes it work. Like any film, it’s the characters and how real they become. We have to believe them before we care about what happens to them. Searching accomplishes that goal. Most won’t.

If there’s a flaw in the film, it comes in the final 10 minutes. The plot is suddenly a bit rushed, as if someone realized they were running out of time and needed to sneak in some twists and a resolution before it ends. It was quite unsatisfying, mostly because of how effective the rest of the film was. But the impact of the message remains clear. “You don’t really know your kid.”

Gino Sassani is a member of the Southeastern Film Critic's Association (SEFCA). He is a film and television critic based in Tampa, Florida. He's also the Senior Editor here at Upcomingdiscs. Gino started reviewing films in the early 1990's as a segment of his local television show Focus. He's an award-winning recording artist for Omega Records. Gino is currently working on his 8th album Merchants & Mercenaries. Gino took over Upcomingdiscs Dec 1, 2008. He works out of a home theater he calls The Reel World. Favorite films: The Godfather, The Godfather Part II, The Body Snatcher (Val Lewton film with Karloff and Lugosi, not the pod people film), Unforgiven, Gladiator, The Lion King, Jaws, Son Of Frankenstein, The Good, The Bad And The Ugly, and Monsters, Inc.
Criminal Minds: The Thirteenth Season Jack Ryan 5-Film Collection (UHD Blu-ray) (4K)