Posted in: No Huddle by Brent Lorentson on September 7th, 2018 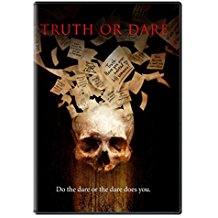 I’m pretty sure at some point we’ve all played the game Truth or Dare. Pretty much it’s a game we all play in our teenage years, where the results tend to end up with either some hurt feelings, shame, or someone getting injured.  I think the worst instance I can remember in my past was on a camping trip, and it resulted in one of our friends falling into our campfire. As you’d imagine, it didn’t end well, and all our parents were pretty upset.  Over the years the game has been brought to the big screen in a variety of ways, and this incarnation of Truth or Dare puts up a noble effort by injecting a supernatural spin on the game. And the result?  I can honestly say I had a good time with this little flick.

The film opens up in 1983, and it would seem that there are two remaining players in the game, one of whom is standing on the roof of a house where they are expected to jump off.  It’s no surprise that this doesn’t end well, and for the players it does indeed only get worse.  When the film jumps to present day, a group of eight friends are meeting up at a “rental” house that happens to be where the events in 1983 took place.  The home is rumored to be haunted. Carter (Luke Baines) has plans on catching some paranormal evidence, and by doing so he wants to get his friends to play Truth or Dare.  As setups go, for a horror film this may not seem all to original, but this isn’t a film that’s attempting to break the mold; it’s simply just trying to have some fun, and it succeeds in doing so.

The game takes a twist when it seems that there is a supernatural force that is dictating the dares, and for those who don’t wish to play along, well, they end up dead.  This definitely plays out like a Saw knockoff film, especially when we see how the dares and truths have a more personal resonance with the characters and their past.  If I had any major complaint it is that the film is a bit light on character development. Pretty much all the characters are nothing more than figures to go through round after round of torture.  Strangely, though, it’s the performances from the cast that make these characters at least likeable. The acting may not be top-notch, but there is a bit of chemistry in the group that comes through on screen.

The closest we do get to some character depth is between the characters Alex (Cassandra Scerbo) and Maddie (Brytni Sarpy) who are best friends who go through the emotional and physical wringer over the course of the film.  Scerbo handles herself well in the moments where her character needs to take charge, and I wouldn’t be surprised if this leads to more leading roles if she sticks to the horror genre.  Speaking of leading ladies, the film contains a scene with one of the most famous leading ladies of 80’s horror, Heather Langenkamp (A Nightmare on Elm Street).  Sure, she may be in only one scene, but it is an effective scene.

While this may not be a great film, for a film that made its debut on SYFY last year I had a good time with this one.  I didn’t see the Blumhouse film with the same title, and really, it’s not a film I’m in any rush to see, but this was a film that turned out to be a nice surprise.  This is one of those titles that you can enjoy when you’re up late and are in the mood for a horror film with friends.  2018 has been a great year for horror in my opinion. While I don’t think this can contend with the heavy hitters, there are enough squirm-worthy moments to give Truth or Dare a chance, that is, of course, if you think you can handle it.

Brent Lorentson is a horror writer and film critic based out of Tampa, Florida. With a BA in Digital Film, he co-wrote and co-directed Scavenger Hunt. His short stories have appeared in various horror anthologies. In 2019 his short script Fertile Blood will be a part of the anthology horror film Slumber Party. He is currently working on his first novel A Dark and Secret Place set to be released in late 2019. Favorite Films: Taxi Driver, Fight Club, I Saw the Devil, The Wild Bunch, Dawn of the Dead, A Clockwork Orange, Pulp Fiction, Heathers, The Monster Squad, and High Fidelity.
Tag (Blu-ray) Young Sheldon: Season 1