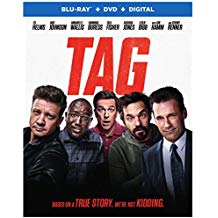 “Our group of friends has been playing the same game of tag for 30 years.”

The tag(haha)line on the Blu-ray cover for this film states, “Based on a True Story. We’re Not Kidding.” The idea of a life-long game of tag is so ridiculous, the people who made this movie can hardly believe it themselves. But while Tag has some fun presenting a children’s game as if it were a big-budget action flick, the film ultimately (and ironically) falters when it veers away from the silly real-life premise and tries to shoehorn dramatic moments to make it feel more like a movie.

Five friends — Hogan “Hoagie” Malloy (Ed Helms), Bob Callahan (Jon Hamm), Randy “Chilli” Cilliano (Jake Johnson), Kevin Sable (Hannibal Buress), and Jerry Pierce (Jeremy Renner) — began their game of tag in 1983 when they were 9 years old. The group decided to keep the game going into adulthood, designating the entire month of May for their (admittedly) childish shenanigans. The one constant throughout the years is that Jerry has never been tagged.

So when Hoagie announces to Bob, Chilli, and Sable that Jerry plans on retiring from the game, the boys decide to put their differences aside in order to try and tag the untaggable Jerry before it’s too late. Jerry has a May wedding coming up in the boys’ hometown, which seemingly makes him a sitting duck. Not surprisingly, the tag brothers are in for way more than they bargained for.

Tag is indeed based on a Wall Street Journal article titled, “It Takes Planning, Caution to Avoid Being ‘It’”, which chronicled the absurd lengths a group of 10 friends have gone through to keep their childhood game going. The movie opens promisingly, by showing the similarly ridiculous steps Hoagie will take to get close enough to Bob to tag him. Hoagie and Bob’s interaction is witnessed by a Wall Street Journal writer named Rebecca (Annabelle Wallis), who decides to (haha) tag along on their adventure. The bad news is Rebecca turns out to be a completely unnecessary audience avatar; the character could’ve easily been cut out of the film entirely.

The inclusion of Rebecca is an example of the biggest problem with this movie: the filmmakers — first-time feature director Jeff Tomsic, and screenwriters Rob McKittrick and Mark Steilen — didn’t have faith that the story’s simple, silly premise could stand on its own. As a result, they added a bunch of story elements that weigh this movie down. To be fair, I like the fact that characters like Hoagie’s ultra-competitive wife Anna (Isla Fisher) and Jerry’s bride-to-be Susan (Leslie Bibb) aren’t merely window dressing and get to mix it up with the boys.

Tomsic amusingly stages the sequences where the boys play tag as a slapstick Bourne movie, which kinda makes sense when you consider that Renner is the target. (The actor managed to fracture an elbow and a wrist while filming a stunt for this movie…not Mission: Impossible or The Avengers.) This is a film that heavily references Predator during a set piece in a forest, so the film’s third-act swerve into dramatic territory — this really could end up being the final game of tag for one of the group members — clashes with the movie’s jovial tone up to that point.

The good news is Tag managed to assemble a game and talented cast to help sell this ridiculous conceit. For better or worse, the performers are basically “playing the hits” of their established screen personas. That means Helms is an exceedingly earnest dork, Hamm is slick with a side of silliness, Johnson verbosely drifts into his punchlines as a stoner, Buress gets a chance to do observational humor, and Renner brings a hint of detached danger. (And Fisher gets to reprise her Wedding Crashers intensity.) No cast member totally stands out — I haven’t even mentioned Rashida Jones as a childhood friend who sparks a rivalry between Hamm’s Bob and Johnson’s Chilli — but they’re a fun group to hang out with. It’s a good thing: even at a relatively slim 100 minutes, Tag feels like it’s straining for story at times.

Tag is presented in an aspect ratio of 2.40:1. The 1080p image is arrived at with an AVC MPEG-4 codec at an average of 35 mbps. This is a pretty solid and standard HD presentation. In fact, it’s probably a little too standard: the movie is set in the Pacific Northwest, but (like so many other Hollywood productions these days) was actually filmed in Atlanta. That means we get pleasingly — but generically — warm flesh tones, instead of something a little earthier or chillier that would’ve given the film a stronger sense of place. That being said, fine detail is strong here — especially for slo-mo close-ups during action sequences — and the presentation is blemish-free.

The DTS-HD Master Audio 5.1 track is, like most comedies, dialogue-driven. However, the stylized sequences where the group tries (in vain) to tag Jerry get some strong bottom end support from the subs, with each blow and pratfall landing with an extra thump. There is some subtle rear speaker activity whenever the boys are hanging out at their hometown bar, but otherwise surround activity is surprisingly negligible. When you consider that Jerry’s would-be taggers come from all over the place, I wish there had been more dynamic directionality from the side and rear speakers than we ended up getting.

Meet the Real Tag Brothers: (5:23) We get to know the 10 friends who have been playing the same game of tag since 1982. This featuette also includes footage from some of the group’s real-life shenanigans. (Featuring disguises and a group member getting tagged in the shower.) One of the tag brothers reveals that the game forces the friends to stay in touch with one another. (Literally.)

Deleted Scenes: (6:20) There are eight scenes total, and they include an amusing flashback to the group’s high school days (when they made their pact to keep the game of tag going) and more space for Buress to riff.

Gag Reel: (8:05) The usual flubbed lines and goofing around on set, although this gag reel also features some “Who farted?” action starring Hamm.

While it has a decent amount of funny moments, I wish Tag had been more fun than it ended up being. The cast is good, and the action is amusing enough. But instead of trying to ground such an outrageous story with forced melodrama, the movie should’ve taken a cue from the real life players and just run with the goofiness.