This Is Us: Season 2

Posted in: No Huddle by Brent Lorentson on September 17th, 2018 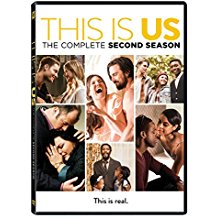 When it comes to shows that simply sneak up on you and manage to suck you in, This Is Us would be a show I never saw coming nor expected to simply fall in love with.  As a show that is on network television, it stands toe to toe with the best that cable has to offer. But what is most surprising is that what sets this show apart from the rest of the pack isn’t a complex antihero or dragons; instead it is as simple as being a show that feels as real as anything I’ve seen on television in some time.  As the title would suggest This Is Us is simply about a family and the struggles and successes that come day to day, though as many of you can understand and relate, there is nothing simple about life and the constant hurdles that are thrown at us on a day to day basis.  I was hesitant last year when I watched the first season, but I was quickly moved by its characters and their stories.  I was so impressed with that first season I wondered if it could maintain at that level for the second season.  Well, after 18 episodes and plenty of tears, I’m here to say it didn’t maintain; instead, it exceeded what it did the first season.

Dan Fogelman (Crazy, Stupid, Love) has created a show about the Pearsons, Jack (Milo Ventimiglia) and Rebecca (Mandy Moore), as they go about their journey raising their three kids, who all happen to share the same birthday with their father. This season we start off with the siblings turning 37. There is Kate (Chrissy Metz), who is continuing to follow her interest in singing as well as being with her fiancée Toby (Chris Sullivan), Kevin (Justin Hartley), who is working his way to becoming a serious actor in film, and then we have Randall (Sterling K. Brown), who this season is working on bringing in a new member of the family.

Through Season Two we continue to have the altered timelines where the show constantly will flashback to when Kate, Kevin and Randall were kids, and just like before, these flashbacks are not always good ones.  Season One did a good job at flirting around the topic of their dad’s death; this season we get some answers to that as well as some other emotionally devastating news.  The episode we see this unfold is on the back half of the season in episode 14, “Super Bowl Sunday’.  This is one of the great episodes, but don’t say I didn’t warn you that it’s going to be an emotional one.

A recurring new character comes to the show when Randall and his wife, Beth (Susan Kelechi Watson) decide to foster a troubled youth, Deja (Lyric Ross).  This is a storyline that as expected has plenty of ups and downs, but once again brings out a great performance from Sterling K. Brown that continues to show that he is an actor who is bound to be a star for years to come. While Randall is working on his family, Kate and Toby are working on expanding theirs.  Chrissy Metz has a lot going on over the course of this season, from the singing career, to getting pregnant, to eventually her getting married, the range of emotions we see her going through is simply impressive, and when this gets to Episode 9, “Number Two”, well, hold on tight.  Episode 9 I won’t spoil any but to say it is all about Kate, and it really pulls back the curtain to who she is. I’ll admit this isn’t the most enjoyable episode to watch, but for the emotions it’s able to evoke, it reflects how strong the writing, direction, and performances are for this show.  And for those who may be on the fence about Toby, this is where we really get to see his character shine.

Personally Kevin has been the weak link of the show. Justin Hartley is great in the role; it’s just that he hasn’t been given many moments where we can appreciate him as a good guy. Instead he’s kind of spoiled and obnoxious at times, and when he gets put into rehab after getting a DUI, well, his changes are not always for the better, though what I do appreciate is that they’ve made the black sheep of the family someone who is a celebrity and liked by everyone, up until they actually get to know him.  His stint in rehab does give us an episode where we see the core Pearson family in a room together working out their grievances, and this does get pretty heated.  While Kevin may not be the most liked character, he is definitely the one who is attempting to go through the most change this season, and it shows how difficult it is to change who you are.

This brings me to Jack and Rebecca. Ventimiglia and Moore have a great chemistry together in this, and they certainly are a couple that many should aspire to be.  We do get more of a peek into their relationship, though it always seems as though the flashbacks to them are perhaps seen too often through rose-colored glasses.  Sure, we get it; Jack is a great guy, but even great guys slip up time to time.  Even when we see him struggling with alcoholism, he manages to do so with a bit of class and is endearing for it.  Moore does a lot with her character this season as we see her coming to grips with her rocky relationship with Kate and how her marrying Jack’s best friend made an impact on Kevin.  What’s remarkable about Moore in her role is how she manages to make each performance seem effortless, as though she isn’t acting but instead is genuinely in the moment with her character.  As Moore continues to develop this character, I hope she gets some critical and award attention at some point, because she goes toe to toe with Ventimiglia, and they make that couple work beautifully.

One of the nice surprises in the show has to do with the casting of the guest stars we see sprinkled over the course of the season. Sylvester Stallone, Delroy Lindo, Pam Grier, Debra Jo Rupp, and Ron Howard all play a part over the course of the season and help elevate this show to another level.  Stallone is the biggest surprise here, as he’s playing himself in a movie that Kevin is in, though we only get him for a couple of scenes, they are some pretty great moments.

For those who have already seen Season One, you know that the show is an emotional rollercoaster. Personally, binge-watching this season was emotionally exhausting.  There are many emotional highs and lows this season, but that’s what makes this show work, because it is true to life.  The season ends with a few flash-forwards that give us a taste for things to come and what these characters will have to work through.  I’m excited to see what comes next, but I’m curious to see how long everyone involved can maintain the level they are working at and delivering us.  Only time will tell, and one thing is for certain: I’ll be watching it…most likely with a tissue within reach.

Brent Lorentson is a horror writer and film critic based out of Tampa, Florida. With a BA in Digital Film, he co-wrote and co-directed Scavenger Hunt. His short stories have appeared in various horror anthologies. In 2019 his short script Fertile Blood will be a part of the anthology horror film Slumber Party. He is currently working on his first novel A Dark and Secret Place set to be released in late 2019. Favorite Films: Taxi Driver, Fight Club, I Saw the Devil, The Wild Bunch, Dawn of the Dead, A Clockwork Orange, Pulp Fiction, Heathers, The Monster Squad, and High Fidelity.
Revolution: New Art for a New World Between Land & Sea