Posted in: No Huddle by Jeremy Butler on September 19th, 2018 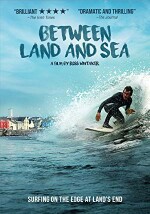 Lahinch is a coastal town in County Clare, Ireland.  It has a population of around 642 people and is known for the Dough Castle tower ruins and the Lahinch Golf Club, where the South of Ireland Championship is played. However, it is mostly notable, especially for the purpose of this documentary, for being one of the foremost surfing locations in Ireland. That is the key component of the documentary, Between Land and Sea, which is set against the backdrop of Ireland’s west coast and captures the beauty of the landscape as well as the waves that even someone like me, who has never stepped on a surfboard, is tempted to ride.

Between Land and Sea is told in an observational documentary format, meaning that there is no narration, and the audience is treated as being a part of the conversation, which was fairly immersive in my opinion. It made me feel like I was actually there engaging in the conversation with the individual being interviewed. First we are introduced to a local, who works predominantly through the year as a miner, but his true passion appears to be for making surfboards. The film goes on to interview his family, as well as other members of the community including former professional surfer Fergal Smith and a cameo for surfing legend Shane Dorian. The most captivating portion for me was the landscape, which was captured beautifully. I’ve always known that Ireland had a rugged beauty to it, but here it was full-frontal. Granted the focus was on this one coastal town, but still there was no denying the allure of Lahinch.

The documentary can also double as an advertising campaign, as it depicts a group of diehard surfers who want the surfing conditions to be known worldwide. Based off what I’ve seen, Lahinch does feature the type of waves that experienced individuals spend their lives chasing. As I mentioned earlier, even I found myself tempted to want to ride. It is worth mentioning that the waves are not for the faint of heart; as one reporter is quoted as saying, “waves so powerful they look as if they could snap a person in half.” Have no fear, as there is a prominent surfing school in the town. Also to the town’s credit, in 2006 they set a world record when 44 surfers managed to ride a single wave.

In conclusion, Between Land and Sea is an immersive experience that highlights a little-known coastal town in the County Clare section of Ireland, with firsthand accounts from locals as well as surfing professionals, that speaks about the alluring nature of the waves, proving that even the most remote of locations possess the most sought-after appeals. Don’t be surprised if you find yourself wanting to visit Lahinch in the near future, especially if you are passionate about surfing. As I said, I have never surfed a day in my life, and I find myself considering picking it up as a hobby.

Jeremy Butler is a film school graduate of the International Academy of Design and Technology. He is been writing for Upcomingdiscs since 2012; however, movies have played a big part of his life for much longer. Favorite genres include horror, science fiction/fantasy, and comedy. Favorite movies are V for Vendetta, Boondocks Saints, Kiss Kiss Bang Bang, and The Godfather.
This Is Us: Season 2 Rolling Stone: Stories From The Edge (Blu-ray)