Posted in: No Huddle by Gino Sassani on September 26th, 2018 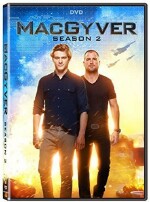 Are you feeling a little déjà vu when you turn on a television or live stream these days? It seems like almost half the shows on television today are either revivals or reboots of shows that have aired before. Recently there have been revivals of The X-Files, 24, Prison Break, Growing Pains, Roseanne, and even Murphy Brown. The box office is filled with feature films of Star Trek, The Equalizer and Baywatch. While Tom Selleck is playing a family patriarch on Blue Bloods, Jay Hernandez is in Hawaii driving a bright red Ferrari in a new version of Magnum P.I. Hawaii 5-O is one of the most popular shows on CBS, and Charmed is bewitching an entire new generation of streamers on the internet. You might consider this a time of little ingenuity on the tube, but CBS has gone back in time to resurrect the very definition of ingenuity in MacGyver. The show is about to begin a third season, and the second season is now out on DVD thanks to some cooperation between Lionsgate and CBS.

The basic idea of the original series remains here. Angus MacGyver is now played by Lucas Till. He still works for the Phoenix foundation, which remains a covert government agency disguised as a think tank. Just like the Richard Dean Anderson character, MacGyver has the uncanny ability to use whatever happens to be handy to build what he happens to need to bring down a bad guy or save lives. The name has become a part of our lexicon and refers to using something in a makeshift procedure to solve a problem. As much as the basic elements of the original remain, there are quite a few significant differences to be found here.

Anderson’s MacGyver usually worked alone. He often teamed up with someone in the field who was more often than not an attractive but super-smart lady. This MacGyver is part of a team dynamic. CSI’s George Eads is a former Navy Seal who provides the muscle on the missions. They have been friends since their shared days in the Middle East. This character takes the name, but not the spirit, of Jack Dalton. The original Dalton was a recurring character played by Bruce McGill who was a rascal-type pilot. When Dalton showed up in the old days, it was usually to drag MacGyver into one of his schemes and messes. He was a lighthearted guy. The new Dalton is all business and military procedure. He carries a lot of big guns and loves getting into fights. His rather limited intellect works as a counter to MacGyver’s hyper-intelligence. This Dalton is a regular and Mac’s partner in the field.

Tristin Mays plays Riley Davis. She’s a super-hacker who went to prison for breaking into the NSA computer files. She is also a kind of ward to Dalton. He protected her from an abusive father when she was young, and he’s looked after her ever since. His pull got her out of prison and on the team. Justin Hiles plays the comic relief in the form of Bozer. He and Mac were friends since kids and he found out Mac’s secret in the first season, and so he’s now a member of the team. This season he gets to go to spy school, where he ends up breaking up a ring of terrorists who were making files on the trainees to distribute their identities when they are operational spies. He also hooks up with a fellow student Leanna (Edwards) who will be a more permanent part of the team going into the third season. Meredith Eaton plays Matty Webber, who shares a lot of both physical and personality characteristics of NCIS LA’s Hetty, played by Linda Hunt. Like that show’s Hetty and G relationship, Matty has secrets about Mac’s father that get revealed in the season finale.

There are some other very obvious differences between the shows. The big change is in the character of MacGyver. This version of MacGyver is too self-aware of his abilities. We often see him purposefully putting together his innovations. He’ll be working out a math formula or building something in his head. His intelligence is out in the open. Anderson’s version was so much less self-aware. His builds came more out of instinct and knowledge, and it never looked like he was making an effort to figure things out. I liked that aspect of the original, and it makes him more of a fun guy. This show often talks down to the audience. They often label the pieces of the build, and this Mac explains everything with far too much detail. It’s like these guys don’t have enough faith in the audience, and so they have to tell you how much smarter they are. The old show let you see it with less explanation, and that is so much more entertaining. It used to be fun to try to guess what he was building. Now it’s all being spelled out for you.

While I’m not a fan of those kinds of changes, I do enjoy the team aspect of the show. The problem is that Eads as Dalton pretty much steals the show. He’s a much more entertaining character and more like the rest of us. In the old show we all wanted to be MacGyver. In this show we all want to be Dalton.

MacGyver’s biggest enemy returns to the show. This time Murdoc is played by David Dastmalchian, and he’s actually rather good in the part. He plays a wonderfully sinister villain who raises the level of the show when he’s around. In one of the very few casting nods to the 1985 series, Michael Des Barres returns as a kind of teacher for Murdoc. Of course, he played the role of Murdoc in the original show. It’s really the only return cast member outside of a one-shot deal that stars Bruce McGill as a detective who is interrogating MacGyver.

Lee David Zlotoff and Henry Winkler return as producers on this version. Both served in that capacity in the 1980’s with Zlotoff having created the original show. This series also exists in the Hawaii 5-O and NCIS universe. There was a cross-over with Hawaii 5-O last season. The release has extras. There were none on the first release, so both seasons are covered here. One of the best extras is a “Mr. Science” styled show where someone shows us how to do some of Mac’s builds. There’s a huge warning not to try these at home, but they are all harmless and are presented in step-by-step fashion which makes it obvious they want you to try it out. The presenter even says “you should…” He offers workarounds if you don’t have the same materials. There’s a season wrap-up feature along with a gag reel and deleted scenes.

This MacGyver takes a little getting used to. It’s the team dynamic which makes it its own show, and the cast is a very solid one. There’s plenty of chemistry here, and you’ll enjoy watching them do their thing. Of course, production design is higher than it once was. We’re talking almost 20 years of technological advancement in television production. In the first season they even used the old title font and explosion, but I suspect it looked too retro, and this season has a new more modern opening credits scene. For now the show is holding on, but was the last of the CBS returning shows to get picked up. It’s still quality stuff, but we’ll see what a new year brings. “When it gets bad, you’ll know it.”

Gino Sassani is a member of the Southeastern Film Critic's Association (SEFCA). He is a film and television critic based in Tampa, Florida. He's also the Senior Editor here at Upcomingdiscs. Gino started reviewing films in the early 1990's as a segment of his local television show Focus. He's an award-winning recording artist for Omega Records. Gino is currently working on his 8th album Merchants & Mercenaries. Gino took over Upcomingdiscs Dec 1, 2008. He works out of a home theater he calls The Reel World. Favorite films: The Godfather, The Godfather Part II, The Body Snatcher (Val Lewton film with Karloff and Lugosi, not the pod people film), Unforgiven, Gladiator, The Lion King, Jaws, Son Of Frankenstein, The Good, The Bad And The Ugly, and Monsters, Inc.
Solo: A Star Wars Story (Blu-ray) X-files: Season 11 (Blu-ray)