Posted in: No Huddle by Gino Sassani on October 2nd, 2018 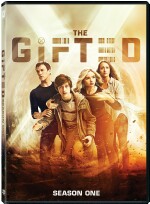 There’s a lot going on with Fox’s X-Men property these days. Legion became the first live-action television series based on that universe. It’s an odd show that takes the franchise in more of a mental direction. There is a new film that features the First Class cast that deals with Jean Grey and her Dark Phoenix nature. While that film is being delayed…again, you can get your mutant fix with the release of the first season of The Gifted on DVD as well as the upcoming second season soon to air. This show is more in line with the kind of action and mutant powers display that fans of the franchise are likely looking for. It appears to exist in the X-Men universe created by Fox, as there are multiple mentions of the X-Men in the show. The first three films are now out in 4K, and there’s a lot of X-Men stuff coming to your home theatre. Add to that list The Gifted: Season 1 on DVD.

Stephen Moyer plays Reed Strucker. He has been a prosecutor who has been working with the Mutant Task Force to help convict dangerous mutants. He saw his job as pretty much cut and dried until his own son and daughter exhibit mutant abilities. Son Andy (White) has been bullied at school and finally lashes out with an unexpected power to cause destructive vibrations that literally bring the school down. Daughter Lauren (Lind) has known for some time that she has the power to send a barrier kind of force much like Sue Richards in The Fantastic Four but without the invisibility. When the Task Force comes for the children, Reed and his wife Kate (Acker) make a run for it. They are assisted by a group of mutants who have established an underground to help shelter mutants and offer resistance to anti-mutant actions.

The Underground is led by three mutants who were given the job by the X-Men before they mysteriously vanished from the scene. There’s Eclipse (Teale), who can shoot bright hot light from his hands. The light is blinding and hot enough to weld metals. Thunderbird (Redford) has enhanced senses that allow him to be a great tracker and pick up sounds and smells from far away. I have a pretty good idea of what his life must be like, except he appears to have the ability to turn it on or off. Lorna Dane (Dumont), aka Polaris, has magnetic skills like Magneto, who his often hinted to be her father. His Brotherhood of Mutants are a part of the show’s mythology and make a bit of an entrance as the season winds down. These three pretty much keep the Underground running. Of course, The Strucker family isn’t easily trusted because of Reed’s work on the Task Force. The leader of that group knows him well. He’s Officer Turner (Bell), and he’s leading the ground forces against the mutants.

There are many Easter eggs connecting the show with the X-Men Universe, both in the comics and on film. The Mutant Task Force works with a private company that is called Sentinel Services and provides tech to the unit. But they are also trying to use access to captured mutants to test and develop weapons. That program is run by a Dr. Campbell, played by Garret Dillahunt. The company is run by a guy named Trask. This ties into the comics’ long-time enemy the Sentinels, who show up in the films and are the main thrust of the time travel tale of Days Of Future Past. Turner must eventually face a test of conscience when he discovers what that company is doing to the mutant captives.

Other mutants that play crucial parts in the series are Clarice (Chung) who has green eyes, so can’t hide as a human. She can open portals and is very important to their operations. Dreamer (Satine) can plant memories and also read minds. The Underground is also threatened by their own kind. In addition to the Brotherhood, there is also a group that wants to resurrect the iconic Hellfire Club, run in the comics by Emma Frost and Sebastian Shaw. In this series we have The Cuckoo or Frost Sisters. They are triplets with a lot of power who come to the Underground’s aid but are really trying to corrupt it for their own purposes. They have a hive mind and can combine their powers. It is discovered that the Strucker siblings can also combine their powers, which is reproduced by Campbell to create a very powerful weapon against the Underground.

The show contains a ton of action and battles with powers. It’s everything that Legion is not. You can tell it’s all moving toward a bigger story that is being put down with breadcrumbs along the way. It’s a cat-and-mouse show, with the government and mutants practically going to war. Amy Acker as Kate is the outsider, and so we really experience this world through her eyes. She has medical training, so becomes valuable to the Underground. The emotional ride is mostly from her and Reed’s perspective. It’s all of this characterization and stories that focus more on people and their struggle that keeps the show fresh throughout its first season. You get all 13 episodes on three discs with no extra features of any kind.

Of course, we’ve seen this show before with the likes of Heroes. But this one ties nicely to a rich universe that many of us have known for decades. I like the way the show flirts with those aspects we know that keeps it connected, but only enough so that it truly stands on its own legs as a series. Don’t expect cameos from the film cast. I think there’s just that right balance, and while we might love to see that kind of an episode, it would take away this unique story. It’s a new kind of X-Men, and it should be allowed to stay that. With Disney taking over next year and the X-Men Universe likely merging with the MCU, it’s hard to predict what’s in store here beyond the current second season. The only thing we know for certain is that “everything is changing”.

Gino Sassani is a member of the Southeastern Film Critic's Association (SEFCA). He is a film and television critic based in Tampa, Florida. He's also the Senior Editor here at Upcomingdiscs. Gino started reviewing films in the early 1990's as a segment of his local television show Focus. He's an award-winning recording artist for Omega Records. Gino is currently working on his 8th album Merchants & Mercenaries. Gino took over Upcomingdiscs Dec 1, 2008. He works out of a home theater he calls The Reel World. Favorite films: The Godfather, The Godfather Part II, The Body Snatcher (Val Lewton film with Karloff and Lugosi, not the pod people film), Unforgiven, Gladiator, The Lion King, Jaws, Son Of Frankenstein, The Good, The Bad And The Ugly, and Monsters, Inc.
C.B. Strike: The Series X-Men: 3 Film Collection (UHD Blu-ray) (4K)