Posted in: Disc Reviews by Gino Sassani on October 2nd, 2018 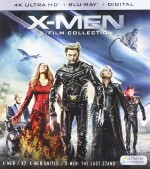 “Mutation: it is the key to our evolution. It has enabled us to evolve from a single-celled organism into the dominant species on the planet. This process is slow, and normally taking thousands and thousands of years. But every few hundred millennia, evolution leaps forward.”

Fox is taking full advantage of their version of the X-Men Universe these days. By this time next year, the group of mutants will once again be back with Marvel at Disney, and I suspect they will quickly join that studio’s MCU. I can’t blame Fox for getting as much out of it now as they can. With the pending release of Dark Phoenix and two television shows running, this was the perfect time to release the original film trilogy on UHD in ultra-high-definition. While the films feel just a little dated today, it’s quite a nice little treat to have them in 4K. These kinds of films are what 4K was built for. And now you can add the original films to your 4K collection with X-Men Trilogy 3 Film Collection out now from Fox.

This film first introduced these mutant characters to the world of the feature film. There was a lot of hesitation on the part of Fox, and while the film did get a very strong cast, it did not get very much money. The film had a budget of a mere $75 million, which is extraordinarily low for a multi-hero film that requires the f/x to bring so many powers to life. But Bryan Singer brought a particular love for the franchise to the screen, and the film was very much focused on the characters themselves.

Patrick Stewart was long the fan choice for Professor Charles Xavier. He had the physical look down so perfectly, but his refined style also helped to add depth to the character. Several times Ian McKellen turned down the role of Magneto. He was in the middle of filming his multi-movie arc of Gandalf in the Lord Of The Rings trilogy, but Singer wanted him badly enough that portions of the shoot were delayed to allow him to finish his work with Peter Jackson. It’s a great move, because just as he did with Gandalf, McKellen brought the villain Magneto to life in a way few other actors could have done. Famke Janssen would add heart to Jean Grey. James Marsden put some fire into Cyclops. And Halle Berry brought grace and style to Storm. But the most iconic casting in the film has to be Hugh Jackman as Wolverine/Logan. The funny thing is that he isn’t anything at all like the comic book character physically. Logan is a short runt, while Jackman is quite tall. Usually the fanboys will make a lot of noise about that kind of change, but Jackman won them all over by delivering a signature performance that would weave its way throughout the franchise and lead to one of the best comic films of all time with the emotional Logan. Singer brought them all together and created a hero family that would take that small $75 million budget and return a global box office of over $300 million.

This film sets the stage for the running theme of this trilogy. It’s a story of prejudice and the reaction to people who are different. It’s a moral story lifted directly from the pages of Marvel’s own comic pages, and it’s told without a lot of preaching. There were better films in the franchise, but none of them would have been made without this one bringing in such a return.

X2 X Men-United is the follow-up film to the original X-men film from 2000. The original film did a good job of setting up the universe of the X-men and introducing us to the core characters that the comic books have always centered around. This film expands on this universe and brings along some of the coolest characters from the comics, these being Pyro, a brief glimpse of Juggernaut, and let’s not forget Nightcrawler. In this film we see the good and bad mutants joining forces to defeat a common enemy. This is a little disappointing, as we get to see cool new good characters but not really any super new baddies, but it also keeps the storyline fresh instead of it just being the good mutants versus the bad mutants.

Things get rolling with an attack on the President of the United States by Nightcrawler. This is a very cool scene involving some of the best CGI I have seen since Gollum from the Lord of the Rings trilogy. Watching Nightcrawler “bamf” around the room is jaw-droppingly slick. The only real issue with this scene and possibly the whole movie is that you can’t figure out how Nightcrawler can attack the President and still be a good guy. It is briefly alluded to that he is under some kind of mind control drug, but this is very easy to miss. Next we find an imprisoned Magneto and Wolverine discovering a part of his past by visiting an old army base and then returning to the Xavier school and a plot being devised to raid the school by William Striker. Striker ends up with the a handful of the school kids as well as Xavier and Cyclops. (Oh yeah, my other complaint with this film is that there really is no reason for Cyclops to exist other than the love triangle with Jean Gray and Wolverine, and the acting by James Marsden is laughable), Magneto breaks out of prison and joins forces with the X Men to rescue Xavier as Stryker is using him to try and kill all the mutants in the world. If this sounds like a lot, it is; there are so many subplots and side stories going on that sometimes it is hard to keep track of everything. Let’s just say that there aren’t really any pacing problems with the film, as it moves along at a very engaging pace.

The bottom line on the story is that the first film was really a big setup for this film, and it delivers. The action is non-stop, the effects are awesome-looking, and the new characters are very cool. It also does a very good job of setting up a third film, as the last scene is basically a teaser trailer for X3.

The third entry into the X-Men franchise turned out quite a bit better than I expected. Early script turmoil was only overshadowed by cast problems. It seemed the bottom fell out when Bryan Singer decided to take on The Man of Steel instead of X3. Enter Brett Ratner, best known for the Rush Hour films. Give the man credit for overcoming a ton of problems to deliver a pretty good thrillride film. Ratner adapted quickly to the f/x driven world of X-Men and managed to fashion a rather compelling tale. The idea of a…“cure” for mutancy is likely the best plot element in the franchise. Ratner was smart enough to not tinker much with the formula already established by Singer. The problem is, he played it entirely too safe. The story has the potential for a hell of an emotional tale, which it never quite delivers. Don’t get me wrong. I enjoyed the film a lot, and I have nothing against these amusement rides, but I couldn’t shake the feeling that this film wanted to be something more than it was. In the greatest traditions of shows like Star Trek, there was a powerful message to be mined here. Instead, it sat there more like a clever plot device, which it certainly was. Ratner did a fine job of dealing with so many characters all wanting their own moments to shine. Hugh Jackman still steals the show as Wolverine, but this time Berry’s Storm and particularly Famke Janssen have meaty roles, if not too much dialog. The real cast surprise has to be Kelsey Grammer. Who could have guessed that barfly Frasier would make such a fine Beast? Patrick Stewart’s death scene was visually stunning, but a bit of a letdown. (Stay tuned after the credits for more on this situation.) The Golden Gate Bridge sequence is a very impressive display. Finally, I expected to see more humor coming from Ratner. The fact is, I guess I expected that there would be too much humor. Perhaps he tried too hard not to create X3:Rush Hour.

Each film is presented in an aspect ratio of 2.40:1 with the exception of the first film which clocks in at 1.35:1. The ultra-high-definition 2160p  images are arrived at by an HEVC codec with an impressive bitrates often in the high 60’s. Each film looks better here than it ever did before. There is not a lot of DNR to take away the rich details of their original appearance. Now colors can be brighter and more vivid. Flames are particularly rich here. In each film a particular character serves as the best example of the improvement of the UHD/HDR upgrade. If you look at Mystique, you can now see the detail that those nine hours in makeup were able to create. The rich blue color of the scales offers wonderful contrast to her red hair. The scales offer wonderful texture along with the color, and you can now literally see the individual scales. With the second film it’s Night Crawler who allows an even darker blue to shine through with the intricate lines of the religious symbols he has carved into his own body. The misty “bamf” of his teleportation f/x is much more of a cloud now. The third film gives us Hank McCoy as Beast. Now we get a blue hair and fur that takes huge advantage of that increased texture as well as detail. Black levels are quite deep. The black uniforms offer a nice bit of shadow definition even against a dark sky.

Unfortunately, these are the same audio tracks found in the Blu-ray releases. I’m disappointed that we do not get DTS:X or Atmos audio here. Certainly the audio is still impressive, and all of the things I’ve said in the original reviews holds up, but this is simply not an upgrade here.

The extras are all on the Blu-ray copy of the film. These are the extras only from the film disc of the original Blu-ray releases. The extra discs are not provided here.

It’s certainly nice to have the films in one place in 4K. There are things that I wish we would have gotten. It would have been nice to have the extra features discs. It also would have been very good to have new audio presentations. Since the dawn of the First Class cast and their mixing in Days Of Future Past, a lot of people have taken sides on which is best. “Across the planet, debate rages.”

Gino Sassani is a member of the Southeastern Film Critic's Association (SEFCA). He is a film and television critic based in Tampa, Florida. He's also the Senior Editor here at Upcomingdiscs. Gino started reviewing films in the early 1990's as a segment of his local television show Focus. He's an award-winning recording artist for Omega Records. Gino is currently working on his 8th album Merchants & Mercenaries. Gino took over Upcomingdiscs Dec 1, 2008. He works out of a home theater he calls The Reel World. Favorite films: The Godfather, The Godfather Part II, The Body Snatcher (Val Lewton film with Karloff and Lugosi, not the pod people film), Unforgiven, Gladiator, The Lion King, Jaws, Son Of Frankenstein, The Good, The Bad And The Ugly, and Monsters, Inc.
The Gifted: Season 1 “31 Nights of Terror” Exorcist II: The Heretic (Collector’s Edition) (Blu-ray)