“31 Nights Of Terror” The Originals: The 5th And Final Season

Posted in: No Huddle by Gino Sassani on October 5th, 2018 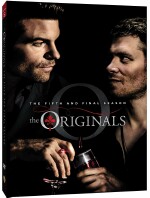 “All I know for certain is if the four Mickaelsons come together, it will signal darkness like we’ve never known. So many possible tipping points, but without the benefit of hindsight, how can we know if we’re at the end of the beginning or the beginning of the end?”

We do have hindsight as Warner Brothers releases the final season of The Originals on DVD. This is the beginning of the end. It’s a bit of a shame. This show always had better stories and a more compelling cast than The Vampire Diaries had on their best season. With the very notable exception of Ian Somerhalder, who is phenomenal, the rest of that casts pales like a vampire in a crypt to the outstanding cast found on The Originals. Unfortunately, Warner Brothers stopped caring so much for the spin-off once the original show exited stage left. The home releases went from Blu-ray to DVD only and the marketing all but dried up. The result of this negligence is a series dying before its time. But you can at least check out the final unlucky 13 episodes crammed on just three discs with the release of The Originals: The Final Season.

Just like they did between seasons three and four, there is another time-jump. I guess there were so many years with stories that didn’t need telling. I quite disagree, but there you are. The show ended the fourth season with Hayley (Tonkin) bringing her baby, Hope, to Mystic Falls, where Alaric (Davis) and Caroline (King) run a school for gifted children. Yeah, I know you’ve heard that somewhere before, but you won’t find Wolverine or Professor Xavier on the grounds of this school. It’s there to help young supernatural children to learn to control their powers and abilities and provide them with a sense of ethics. On second thought, maybe Wolverine is teaching some classes there. I’ll have to look for Hugh Jackman in the credits. Nope. Never mind.

Seven years later, the Mikaelson siblings can’t be in the same area, because the great evil was distributed among them to save the world. That includes Hope, who can be with her father or uncles and aunt. So she acts out and gets herself expelled from school and back in New Orleans, where things are not very peaceful. Without Klaus (Morgan) or even Marcel (Davis), a cult of night walker vampires have taken over and are ruling with a cruel hand. When Haley turns up missing, it’s enough to start bringing the band back together, and to Hell with the consequences.

Most of the season deals with the various factions in New Orleans fighting while one group wants to exploit Hope, and the dark magic to take over the world. Been there. Done that. Hope has created a third hybrid basically because she’s bored, and now the villagers are ready with torches in hand. Of course, Daddy Dearest isn’t going to go for that kind of behavior. Each time any of the siblings get close to each other or hope flowers die, water turns to blood and snakes start running crazy. It’s Biblical kind of stuff, but they continue to push their luck anyway. You gotta love those Mikaelsons.

The best story of the season doesn’t involve all that magic stuff and only later becomes part of the war. Elijah (Gillies) has had his memory wiped and is playing at a piano bar in France without knowing who he is. The various siblings like to show up from time to time and talk philosophy with him without his knowing who they are. That is until the blood water starts flowing. He meets up with a night walker vampire named Antoinette, played wonderfully by Jaime Murray, who had a great season on Dexter as his murderous girlfriend. She’s the best of the new faces, and the stories that isolate on her and Elijah are absolutely golden. I could have watched entire seasons of that pairing. They had great chemistry, and I was sorry to see it end as they began to blend into the show’s main story arc. It turns out they’re like Romeo and Juliet and come from families that hate each other. Ah, but I truly wish this tale could have lingered a bit longer.

Extras include only deleted scenes a gag reel and the final Comic Con panel for the series.

The season carries two basic themes. The story has always been about family, but that theme expands here to another family. There has always been that idea of redemption for Klaus that is always just out of reach. One of the strongest performances on television has come from Joseph Morgan, who plays this brutal killer who somehow has a very strict code of honor and has tremendous love for his family. As much as he will do anything to protect them, he finally realizes that he’s damaged them more than any enemy ever has. The final episodes are quite emotional as Klaus comes closer to the thing that has evaded him for over 1000 years. While last season gave a rather fitting place for the series to end, this finale takes the fans all the way to the edge. It will be an emotional ride, because there can be no doubt that “this is going to be the end of always forever”.

Gino Sassani is a member of the Southeastern Film Critic's Association (SEFCA). He is a film and television critic based in Tampa, Florida. He's also the Senior Editor here at Upcomingdiscs. Gino started reviewing films in the early 1990's as a segment of his local television show Focus. He's an award-winning recording artist for Omega Records. Gino is currently working on his 8th album Merchants & Mercenaries. Gino took over Upcomingdiscs Dec 1, 2008. He works out of a home theater he calls The Reel World. Favorite films: The Godfather, The Godfather Part II, The Body Snatcher (Val Lewton film with Karloff and Lugosi, not the pod people film), Unforgiven, Gladiator, The Lion King, Jaws, Son Of Frankenstein, The Good, The Bad And The Ugly, and Monsters, Inc.
A Star Is Born (2018) Big Fish and Begonia (Blu-Ray)