Posted in: Disc Reviews by Michael Durr on October 5th, 2018 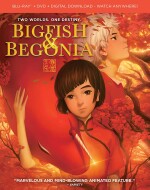 As some of you might know, I have a son, a three-year-old toddler. Since we live in the suburbs, we unfortunately don’t get out as often as we like to places like the beach or any other places where we might be able to explore the animals and creatures that inhabit the wondrous ocean. As a result, we have a tendency to watch plenty of underwater nature documentaries or whichever Pixar animated Nemo or Dory show we can find. Today, we have for review an animated tale about creatures who can turn into beautiful red dolphins so they can be a part of the human world. Is the movie as beautiful as it seems, or much like the dolphins, is it something else in disguise?

“Some fish aren’t meant to be caged. Because they belong to the sky.” In the northern ocean, fish go by the name of Kun, because they are too large to measure. We listen to a narrator who is 117 years old explain the philosophy of life. We apparently are all just fish of the sea. Four and a half billion years ago, fish were the souls of human beings. At the end of the sea is a sky into the human world.

Chun is sixteen years old. She is about to attend the Rite of Passage as her friend Qiu looks on. It is explained that they are not humans, nor gods, but simply known as the Others. They ask for two horses so that they can ride to the Rite of Passage. They make it to the event with friends and family. Chun drinks the special elixir and slowly turns into a creature resembling a red dolphin.

She will then depart for the human world for seven days. There she is to observe human life and how they act within their world. They are not to get too close, or else they might never make it back. As she and the other magical red dolphins cross over, they are immediately greeted in the distance by a pair of human beings, a brother and a sister (we never learn their names, which is a little odd in my opinion). The brother even tries to swim with the dolphins, but since they have been told to do so, they run away.

Later that night, when Chun and the other dolphins are swimming, the two humans play music on their boat. Nearby, a whaling boat is catching whales for slaughter. The red dolphin sees this and tries to help. She does not get caught by the whaling boat but does get trapped by one of the outlier nets that they have placed at the end of the surf. The brother sees the red dolphin caught in the net and does what he can to save her.

He desperately uses his knife to get the dolphin free, and in the melee, he is smacked in the head by the dolphin accidentally. He floats to the bottom of the ocean. Chun realizes what she has done and immediately goes to save him. She finds him on a rock near the bottom, but it is too late; he has drowned. As he takes his last gasp, Chun is wrecked with guilt and anguish. She also realizes that she must do something, anything, to bring him back.

As we soon learn, Chun is able to bring him back but as most things in life, it is not without its share of consequences. In this case, it creates an upset in the balance of nature, and the film explores that in detail. The complexity of the relationship between Chun and this human being are grandiose in scale, as her world is absorbed by taking care of the human until he can eventually take care of himself. There is also a very interesting relationship explained between Chun and her close friend Qiu, who looks after her like a brother would a sister.

However, the thing that is most confusing, at least to the casual viewer, is how much this film shifts in tone. One moment the world is in peace, life is beautiful, and dolphins are flying all among us. The next moment, we see a character who looks like he was ripped out of Street Fighter flinging fireballs across the landscape. The next? We get some odd poop joke that honestly has no place in the film. It’s this jarring effect that really harms the movie. It also doesn’t help that most of the story doesn’t make a lick of sense until the very end anyway, thus hurting any chance of appreciating it beyond the visual spectacle.

The film is shown in a 2.35:1 Widescreen picture and is perhaps one of the most beautiful pieces of animation ever seen. It rivals Pixar, Studio Ghibli, and other high-end animation studios with the amount of work thrown into the production. The color is intense, gorgeous, and every scene is dripping with more details than you could imagine. It is one of those movies where one could immerse themselves in the spectacle without being really interested in the events or how the story unfolds.

It is hard to find anything actually imperfect with the video; perhaps it is actually too good for words and is a visual feast for the viewer. This includes both the water scenes as well as the urban settings. I actually found the urban settings to be even more interesting and selfishly wished more time to be devoted to them.

The audio tracks are DTS HD 5.1 tracks for Mandarin and English (dub). The sound for this film is as almost as equally strong as the video. The track delights and plays carefully with the surrounds as needed to create the world audibly that it needs to. Since the film often shifts from serene to aggressive, the track keeps up for the most part. There were only a few parts throughout that I really felt were not quite as strong as they should be.

Dialog is clear and never sounds muffled (I primarily listened to the Mandarin track with sampling of the English dub along the way). It was a pleasant listen, and the background music is worth listening to again and again. English subtitles are provided. Furthermore, I did notice that between sessions of watching this disc, it did not keep audio and subtitle options like most of my discs do.

Making of Documentary 23:48 : Liang Xuan & Zhang Chun are our chaperones so to speak for this making of featurette. This film was twelve years in the making, and actually as soon as the early 2000’s, the story was already coming along. We learn about and see early drawings, animations and how it came to be. We see other productions they made as well in this visual history. The timeline is a nice effect as they take you along the journey of their creative lives. Like most, their dreams were a lot bigger than their budgets, but they worked hard and made their dreams come true. Even if it meant taking on projects not directly related to the movie itself. A truly stirring and emotional featurette.

Short Film That Inspired Big Fish & Begonia 7:59: Presented in DTS HD MA 2.0 Music and sound effects with some occasional Mandarin, this is presented in a flash cell style of animation. There are some spiritual and tonal differences in this as well, but it fits with the visual spectacle theme. This does come through a little loudly, so you might want to turn down the speakers.

Music Videos 6:10 : Two separate videos here: Big Fish (2:39) and Whispering Wind (3:31). Mandarin with English subtitles. Very beautiful. In many ways, they stir up much more emotion than the film itself. I think the second one is slightly better.

Theatrical Trailer 2:18 : Trailer provided in its original Mandarin and English subtitles. Most sympathetic character in the whole movie has to be that human sister.

Notes: A Digital Copy (redeemable at Shoutfactory.com) and a DVD were also provided in the combo package. I would suggest for future releases they consider clear Blu-ray cases so we can enjoy the interior art.

There is an important message behind this production, and that is to always follow your dreams, no matter how long it takes to get there. Like many review writers, I want to be a published author, and I have realized that it might very well take me the rest of my life to get there. But I can never stop trying. Big Fish and Begonia is a wonderful looking and sounding film. It feels truly at peace with its setting and tells a good story. However, it is troubling some of the issues it has with going from a peaceful serene setting to something out of a fighting video game is odd at best.

The disc technically is leaps and bounds above most animated features. It has amazing video and great audio. The colors come alive, and it is quite easy to fall into the world that Xuan and Chun have created for us. The special features aren’t so much about volume, but rather about quality with a pair of fine videos and an excellent making-of featurette. My recommendation, like the relationships in the film, is a very complex one. If you like Asian animation, if you like beautiful scenery and music, and are willing to forgive some of the missteps, you can find a very wonderful picture. Congratulations to the crew and to the creators and may the sequel (if there is one coming) be even better.

One note if you made it to the end of this review, there is a mid-credits scene worth checking out, as it does help us learn the fate of one of the characters. Also, hence why I think we might get a sequel if Xuan and Chun are making one.

Michael Durr has been reviewing movies for the better part of fifteen years now. He primarily enjoys thrillers, sci-fi, animation and even a little courtroom drama. His favorite films include Escape from New York, the Goonies and anything with Alyssa Milano. When he’s not praising Kurt Russell as the greatest actor of our time or scratching his head over a David Lynch flick, he’s spending time at home in Texas with his lovely wife, Lori and his amazing son. How they put up with him is a mystery, but even Basil Rathbone doesn’t have the time to solve that one.
“31 Nights Of Terror” The Originals: The 5th And Final Season “31 Nights Of Terror” Sleep No More