Posted in: The Reel World by Gino Sassani on October 7th, 2018 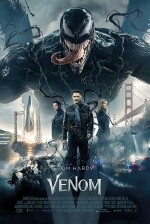 “Eyes. Lungs. Pancreas. So many snacks. So little time.”

The Marvel Venom character started simply enough with a desire to change the look of Spider-Man’s costume in the 1980’s. Spider-Man along with a collection of Marvel’s heroes were abducted by a character called The Beyonder to fight on a battle planet. It’s much like the iconic Planet Hulk story, which was used for the recent Thor film. When Spider-Man returns to Earth, he has a new black and white suit that he found in space. For quite a while the new look for the Web Crawler caused a debate in Marveldom about the hero’s new look. Eventually Peter Parker discovered the suit gave him new abilities and was self-healing. He was also finding himself more and more fatigued. It turned out he wasn’t getting rest at night because the suit would take him out for its own adventures. Reed Richards of The Fantastic Four discovers that the suit wasn’t a suit at all, but an alien life-form that had bonded to Spider-Man. When Parker rejects the symbiote, it attaches to rival Daily Bugle reporter Eddie Brock, and together they become the sometimes hero/sometimes villain Venom.

We got some version of that story when Venom made his feature film debut in 2007 with Spider-Man 3, the last of the Sam Raimi films. Sony had been making plans from that point onward to give the creature its own film. Several scripts and projects were teased over the years until email leaks at Sony caused enough trouble for the studio to work out a new deal with Marvel allowing Spider-Man to join the MCU (Marvel Cinematic Universe). Fans had been looking forward to an R-rated film that could more fully explore the dark nature of the character in much the same way Fox did for Deadpool. For a long time it was assumed not only by the fans but people involved with the film that an R-rated film was the goal. All of that appeared to change suddenly when the powers that be decided an R-rated film would not fit in with the MCU-friendly Spider-Man property. They chickened out and turned the film into a PG-13 compromise that didn’t sit well with the film’s star, Tom Hardy. It didn’t sit well with me either. The film we ended up getting plays out more like a tease of what a real Venom film might be and descends into silliness that taints the true nature of the character.

The idea that an R-rated film took away the Spider-Man connection is utter nonsense. The Deadpool films have included plenty of connections to Fox’s X-Men films which have remained in the more accessible PG-13 territory. Logan ended up being one of the best comic films ever made, delivering on an atmospheric R-rating while taking nothing away from the X-Men universe. I think some Sony folks got cold feet, and apparently there is plenty of footage out there that was cut to make the new version. Hopefully we’ll get to see that in home video down the road. Whatever the future holds and whatever the reasons for the about-face, the movie suffers because of it.

This film introduces us to an Eddie Brock (Hardy) who has a Geraldo-style investigative-journalist show. His life is good. He’s popular and about to be married. When he’s asked to interview the Elon Musk-like Carlton Drake (Ahmed), he can’t resist digging into some dirt he has on the influential billionaire. The move gets Brock fired along with his fiancée (Williams) who dumps him because he snuck a peak at her attorney files to ambush Drake. Drake’s LIFE Corporation has been sending ships out into the solar system looking for things that might become the next wonder drug. What they’ve really brought back is a collection of life-forms that can’t survive on Earth without the perfect host. Drake has been using homeless “volunteers” to find a compatible host, and a lot of folks are dying. Now Brock’s life has turned to crap. No money. No fiancée. No friends. When a LIFE scientist defects and reaches out to him, he reluctantly breaks into the labs and gets exposed to the creature. Turns out he’s a perfect host.

Tom Hardy delivers an exceptional performance here. It might just be his most nuanced to date. This is a side of Hardy we haven’t really seen before, and it works. The rest of the cast is top-notch as well. Riz Ahmed is wonderful as the film’s “big bad”, and it’s all working rather nicely. Unfortunately, the film keeps taking us to the edge of what this symbiote can do and stops short of committing each time. That’s where the R vs. PG-13 ruins the film. Making matters somewhat worse is the fact that the film often ends up too silly to take quite so seriously. Hardy has some conversations in his head with Venom that are often funny and sometimes entertaining, but they go too far. Of course, it wouldn’t be a Tom Hardy movie if you could understand everything he says. As Venom the deep voice has those moments where you just can’t quite make out what he’s saying. That wouldn’t be so bad if so much of what I can hear isn’t so stupid. Too often the film begins to look more like a Looney Tunes short than what I was hoping it would be.

Yeah, the f/x are light-years from the Venom we got in Spider-Man 3. There is some really good stuff in the visual department. There’s some solid action that often attempts to elevate this into something much more entertaining than it ultimately turns out to be.

Days before the release, Tom Hardy walked back his comments about so much of his favorite stuff getting cut. When I see an actor do that, I usually suspect it’s studio executives telling him to cut it out. I suspect Hardy was being honest the first time. It’s all so unfortunate, because there are the makings of a unique kind of comic film here, but it falls short so often that you find yourself working to temper your expectations every time it looks like things are going to hit the fan. The movie pulls too many punches, so it never hits it out of the park. This has been a highly anticipated film for a long time, and that will add to the disappointment.

Stan Lee makes a nice cameo. There are two stingers to stick around for. The first introduces us to another great character from the Venom Universe, and the second is actually a preview for Into The Spider-Verse, which is Sony’s upcoming animated Spider-Man feature film that uses the Miles Morales version of Spider-Man from the comics. It’s actually longer than I expected and is a pretty solid treat, a reward for remaining through the credits. You should do that anyway. So many people work very hard on any given film for a lot less money than the stars, directors and writers get. I always believed that their names deserved to be read. Here’s hoping Sony will be willing to take a chance next time. “Giant leaps will always come at a cost.”

Gino Sassani is a member of the Southeastern Film Critic's Association (SEFCA). He is a film and television critic based in Tampa, Florida. He's also the Senior Editor here at Upcomingdiscs. Gino started reviewing films in the early 1990's as a segment of his local television show Focus. He's an award-winning recording artist for Omega Records. Gino is currently working on his 8th album Merchants & Mercenaries. Gino took over Upcomingdiscs Dec 1, 2008. He works out of a home theater he calls The Reel World. Favorite films: The Godfather, The Godfather Part II, The Body Snatcher (Val Lewton film with Karloff and Lugosi, not the pod people film), Unforgiven, Gladiator, The Lion King, Jaws, Son Of Frankenstein, The Good, The Bad And The Ugly, and Monsters, Inc.
“31 Nights Of Terror” Sleep No More “31 Nights Of Terror” Contest: Win The 30 Film Universal Monster Collection on Blu-ray From Universal