Posted in: No Huddle by Gino Sassani on October 9th, 2018 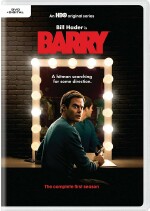 “Acting is a very face-forward type of job. It’s in direct conflict to being someone who anonymously kills people. You want to have a hobby or something, you could take up painting. Hitler painted. John Wayne Gacy painted. It’s a good solid hobby. Never got in the way of what they were doing. You wanna have to go out there and burn a guy and have him say ‘Hey, there’s the guy from the chicken commercial?’ “

Not since Dexter have serial killers been so much fun. Barry Berkman isn’t exactly a serial killer. He’s a hit-man, but you get my meaning. The new HBO black comedy Barry is the kind of show where you find yourself laughing but then catch yourself thinking, “That’s not really funny.” Of course, it is funny. It amuses you. This just might be the politically-incorrect hit of the year. HBO is delivering all eight half-hour episodes on a single disc with the release of Barry: Season One on DVD.

Barry is played by Saturday Night Live veteran Bill Hader, but I promise you that he’s much more entertaining here than he’s ever been on the declining Saturday Night Massacre that delivers its death throes every week on NBC. He’s a hit-man who is a little down on life and looking for a purpose. His partner, Fuches (Root) is his contract agent and tactical planning guy. He’s happy as he can be in his job. One day Barry follows a target/mark into an acting class run by Gene Cousineau, played by Henry Winkler. He ends up getting caught up in the culture and atmosphere of the group and decides to keep coming to the classes. Eventually he starts to think that he might eventually quit the contract killer gig and become an actor. Of course, he’s horrible, but when he talks about his real killer life, Cousineau thinks it’s just a really amazing acting job and is somewhat drawn to the guy. He’s also crushing on another one of the students, Sally (Goldberg). It’s a new experience for him to finally see the aftermath of his job when he joins the group to honor their deceased fellow student who happened to be his target.

“Be on the lookout for a man with no distinguishing features. He killed your buddy.”

One of the unintended consequences of Barry’s new avocation is that the police are investigating the student’s murder and are focusing on the class. Fortunately for Barry and Fuches, the cops who are investigating are about as competent as the graduates of the Police Academy movies. The investigation is being led by Detective Janis Moss (Newsome), who ends up falling for Cousineau. She has a feeling that the killer is part of the class, but she’s talked out of it by her fellow detectives and Cousineau, who sees himself as a kind of Casanova.

What makes the series work is the collection of characters and the actors who portray them. Henry Winkler has long ago hung up the leather jacket that defined his Fonzie character for so many decades. He has worked more behind the camera in those decades than he has in front. But this character is one of his best in a long time. Winkler does an awesome job of bringing so much nuance to this guy who has deluded himself into thinking he’s a great actor and teacher, all the while he’s out auditioning for big parts like “Last Guy In Line”. Winkler was always a good physical actor, and that remains to this day. His body language and use of his hands and eyes create a very complete character from top to bottom. Bill Hader often deadpans his performance, but it fits in with this emotionally-dead killer who’s looking for a new purpose. He’s trying to blend in and mimic the emotions that he discovers in his new friends. It makes him kind of a lovable and awkward character who fits right in with this rather flawed group who are oblivious to the real world out there.

Barry and Fuches have been working with a Chechens group of mobsters that are just as subtly incompetent. NoHo Hank is played by Anthony Carrigan, and he’s one of the most entertaining characters on the show. There’s this theme that runs through pretty much everyone on the series that they aren’t really comfortable in their lives, and they all are just acting out their places but just don’t quite belong. NoHo Hank is the character who goes for the obvious laughs. He likes Barry and goes to great lengths to protect him from the big bosses he works for. There’s a hint that he’s gay and might have stronger feelings for Barry than he lets on. He’s a mess, but somehow a lovable mess who gets under your skin no matter how stupid he comes across. You just can’t help pulling for the guy.

Stephen Root has always been a funny guy. Here he’s the partner who doesn’t really do anything in the partnership, but lives under the delusion he’s the most important part of what they do. He’s going along for the ride, but when stuff gets bad, he’s the first one to crack. This guy could rationalize his way out of any moral situation and is one of those guys who has survived this long just out of pure luck.

The best thing you can really say about this show is that they put together such a cast of characters that you end up just liking to hang out with these guys. Many times I couldn’t tell you the nuances of the plot, but I’m just digging chilling with these characters. The season is a short eight episodes that clock in just under a half hour. There’s no question that it leaves you wanting more, and that’s the best feeling any show can leave an audience with. I wanted the ride to go one just a little longer. No. That’s a lie. I wanted the ride to go on a lot longer.  There aren’t any extras, so this is as bare-bones as releases come. But it’s fun. I can’t wait for more. “I look forward to taking this journey with you.”

Gino Sassani is a member of the Southeastern Film Critic's Association (SEFCA). He is a film and television critic based in Tampa, Florida. He's also the Senior Editor here at Upcomingdiscs. Gino started reviewing films in the early 1990's as a segment of his local television show Focus. He's an award-winning recording artist for Omega Records. Gino is currently working on his 8th album Merchants & Mercenaries. Gino took over Upcomingdiscs Dec 1, 2008. He works out of a home theater he calls The Reel World. Favorite films: The Godfather, The Godfather Part II, The Body Snatcher (Val Lewton film with Karloff and Lugosi, not the pod people film), Unforgiven, Gladiator, The Lion King, Jaws, Son Of Frankenstein, The Good, The Bad And The Ugly, and Monsters, Inc.
The 100: Season 5 “31 Nights of Terror” Puppet Master: The Littlest Reich (UHD-Blu-ray) (4K)