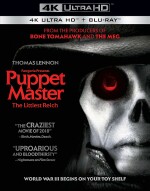 “Why would anybody create a Nazi puppet?!”

There are two types of people in this world: A) the sort of person who reads the question above and says, “That’s offensive! I have absolutely no idea” and B) the joyful weirdo who replies, “Why would anybody stop at creating just *one* Nazi puppet?” If you’re in Group B, you’re in luck…the people behind Puppet Master: The Littlest Reich didn’t stop at one Nazi puppet. (Not even close!) More importantly, this bloody reboot of the 1989 cult horror classic features some of the craziest and most disgusting kills I’ve seen in a while. (I promise that’s a compliment.)

The original Puppet Master came out in 1989, introducing us to deranged puppeteer Andre Toulon (played by William Hickey) and his deadly creations, which had names like “Blade” and “Shredder Khan.” Although Puppet Master isn’t exactly a Halloween or Friday the 13th-level brand in horror, that first film has spawned about a dozen follow-ups, including detours into the turn of the 20th century and Nazi Germany.

The Littlest Reich obviously picks up the Nazi thread while paying homage to the original with a prologue set in 1989 featuring Udo Kier as Toulon. (A graphic novel-style opening credits sequence offers a handy summary of Toulon’s deadly puppet shenanigans throughout the entire 20th century.) The action flashes forward to 2018, which is when we meet recently-divorced Edgar (Thomas Lennon), a struggling comic book artist who has moved back in with his parents.

Edgar finds a nefarious-looking puppet among his late brother’s possessions and decides to try and sell it at a nearby convention commemorating the 30th anniversary of the “Toulon Murders.” He is joined on this road trip by new girlfriend/ludicrously friendly neighbor Ashley (Jenny Pellicer) and his comic book shop boss Markowitz (Nelson Franklin). But really, the convention mostly turns out to be a convenient place to gather a bunch of puppets, have them be brought to life by a mysterious supernatural force, and allow them go to town on a bunch of unsuspecting victims.

The directors are Sonny Laguna and Tommy Wiklund, who are working from a script by S. Craig Zahler (who made the excellent and equally bloodthirsty Bone Tomahawk). Laguna and Wiklund embrace the chintzy spirit of the original film by relying heavily on practical effects for all the puppet action.

The result is some of the most sickening (and inventive!) kills I’ve seen in quite a long time. (I don’t want to give too much away, but The Littlest Reich is the best movie I’ve seen this year that features a decapitated man urinating on his own head.) Meanwhile, Zahler’s script displays a clear love and appreciation for this particular brand of horror schlock, which is a semi-fancy way of saying there is also some gratuitous nudity followed by…what usually happens to people who are gratuitously nude in horror films.

It’s not surprising to find that a movie called The Littlest Reich crosses some lines. This new film brings back a lot of the franchise’s fan favorite puppets, many of which were formerly cast as Nazi hunters. (The original incarnation of Toulon was a French puppeteer who committed suicide right before he was discovered by Nazis.) In The Littlest Reich, Toulon — who has been reincarnated in several different forms throughout the series — uses the puppets as a way of killing groups of people who disgust him, which means the puppets themselves have been re-cast as the Nazis.

I’m all for pushing the boundaries of taste, especially in a movie called Puppet Master: The Littlest Reich. But once the killing starts, one character points out that the puppets are targeting minorities, members of the LGBT community, and (naturally) Jews. While this is totally in character in terms of Nazi behavior, the fact that the movie stages what is essentially a string of brutally over-the-top hate crimes with such glee feels…a bit icky. Fortunately, the Nazi puppets eventually become a little less discerning in who they murder.

Lennon (Reno 911) is ostensibly the leader of this surprisingly solid ensemble, but the comic actor opts for a deadpan performance that is far too muted for this film’s insane wavelength. (It’s honestly a mystery why Pellicer’s Ashley is so into Edgar.) As a result, the real standout is Franklin as Markowitz, who starts off as a jerky goofball but really shines once he realizes that the puppets are targeting him due to his Jewish heritage. In addition to Kier, the movie’s cast also nods to its ‘80s origins by casting actors like Michael Pare (playing it even straighter than Lennon as a cop) and Barbara Crampton (the Re-Animator star still looks terrific as one of the cops who took down Toulon in the 1980s).

Puppet Master: The Littlest Reich is presented in an aspect ratio of 2.35:1. The ultra-high definition 2160p image is arrived at with an HEVC codec at an average of 58 mbps. While The Littlest Reich budget isn’t quite as low as the one for the original film 30 years ago, you still shouldn’t expect a visual feast here. The image is generally pretty murky and doesn’t at all take advantage of the disc’s HDR capabilities. (The only time this image comes close to dazzling is during the graphic novel-style opening credits.) Black levels needed to be richer and inkier, which is a problem since the overwhelming majority of the film takes place at night and indoors. The only place the UHD image pops is during close-ups of the killer puppets, which reveal some strong fine detail in their costumes and craftsmanship.

For a movie that features so many people screaming and so much flesh being torn to shred, the DTS-HD Master Audio 5.1 track is actually surprisingly subdued a lot of the time. Rear speaker activity largely consists of boosting Fabio Frizzi and Richard Band’s score, along with the occasional background noise during crowd scenes (including the movie’s opening bar sequence). Sub activity is considerably livelier, deepening the impact of every killing blow and (in one instance) adding some extra sizzle to the flames in a furnace. Overall, this is a decent, well-balanced track, even if it’s a little more dialogue-driven than I expected.

The bonus material is available on both the UHD and Blu-ray copies of the film.

Behind the Scenes — Puppet Master: The Littlest Reich: (5:55) Producer Dallas Sonnier refers this newest iteration of the franchise as a “reboot” and recalls renting the original film on home video in 1989. Otherwise, this is a good-natured featurette that spotlights some cool locations (the Ambassador Hotel in Dallas), along with some impressively gnarly makeup effects.

The Cast of Puppet Master: The Littlest Reich: (6:55) This featurette focuses on the cast, which includes ‘70s and ‘80s genre favorites like Michael Pare (Streets of Fire), Barbara Crampton (Re-Animator) and Udo Kier (Blood for Dracula). Leading man Thomas Lennon notes that his young son has a cameo in the movie, which the boy won’t actually be able to watch for a looooong time.

Puppets — From Concept to Creation: (1:44) A quick little montage of the killer puppets, including original sketches, previous appearances in the franchise, and some of their current kills in The Littlest Reich.

Lightning Girl Comic — From Sketch to Final: (0:40) An even quicker look at some comic book covers of “Lightning Girl,” the character created by The Littlest Reich hero Edgar.

The film ends with a pretty blatant set-up for a sequel, and I actually wouldn’t mind seeing what this creative team comes up with.