Posted in: Podcasts by Gino Sassani on October 18th, 2018

Painless is out on DVD from Indican Pictures. 31 Nights Of Terror takes you behind the scenes with writer/director Jordan Horowitz. Joey Klein stars as a man who can’t feel pain and Painless covers his desperate search for a cure. I had a nice talk with Jordan Horowitz about the film. he let me in on some nice inside stories. Now you can eavesdrop on the call and you won’t even need any help from the NSA. Bang it here to listen to my chat with Jordan Horowitz.

Catch the film at Amazon Painless 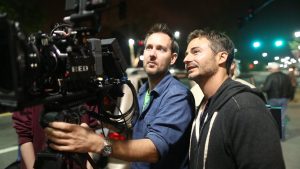 Gino Sassani is a member of the Southeastern Film Critic's Association (SEFCA). He is a film and television critic based in Tampa, Florida. He's also the Senior Editor here at Upcomingdiscs. Gino started reviewing films in the early 1990's as a segment of his local television show Focus. He's an award-winning recording artist for Omega Records. Gino is currently working on his 8th album Merchants & Mercenaries. Gino took over Upcomingdiscs Dec 1, 2008. He works out of a home theater he calls The Reel World. Favorite films: The Godfather, The Godfather Part II, The Body Snatcher (Val Lewton film with Karloff and Lugosi, not the pod people film), Unforgiven, Gladiator, The Lion King, Jaws, Son Of Frankenstein, The Good, The Bad And The Ugly, and Monsters, Inc.
Ant-Man and The Wasp (Blu-ray) The Oath