Ant-Man and The Wasp (Blu-ray) 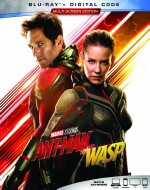 This past summer, the Marvel Cinematic Universe was turned upside down in a snap. Avengers: Infinity War was the culmination of 10 years worth of origin stories and world-building. That blockbuster featured (almost) every MCU hero in the galaxy, universe-spanning stakes, and an unforgettable cliffhanger. So you can excuse Marvel for scaling things back (waaaaay back) with its next entry. Of course, any superhero flick that came immediately after Infinity War was going to feel small by comparison, so who better to take on that task than the tiniest hero of them all?

“So…how long have you been Ant-Man again?”

Ant Man and The Wasp appropriately opens with a nifty sequence showing the titular heroes heading into action….though not necessarily in the form you’d expect. (I continue to be amazed by the way technology can turn back the clock for certain actors.) Of course, the Ant-Man movie audiences are most familiar with is Scott Lang (Paul Rudd), who is currently finishing up a house arrest stint for violating the Sokovia Accords by taking part in the massive superhero smackdown at the center of Captain America: Civil War. Reformed cat burglar Scott is determined to be a responsible father to adorable moppet Cassie (Abby Ryder Fortson), so he is more focused on his security consulting business than he is on saving the world. That changes when a couple of old friends come calling.

“I think it’s possible, to bring her back.”

Hank Pym (Michael Douglas) and his daughter Hope Van Dyne (Evangeline Lilly) are also on the run from the authorities. Pym developed the “Pym particle,” which allowed him and wife Janet Van Dyne (Michelle Pfeiffer) to alter their sizes. As we learned in Ant-Man, Janet sacrificed herself during a mission by going subatomic and was lost to the Quantum Realm several decades ago. Scott’s own foray into the Quantum Realm — and his successful return — lead Hank and Hope to seek his help after Hank becomes convinced that they can get Janet out. Hank and Hope are still furious with Scott for his irresponsible use of the Ant-Man suit, but the trio runs into bigger problems in the form of Ghost (Hannah John-Kamen), a villain who can phase through objects.

“Do you guys just put the word “quantum” in front of everything?”

Ant-Man and The Wasp is the 20th(!) film in the MCU, and it’s also among the most irreverent. (Rudd is one of five credited writers on the script; he clearly had a lot of input, and it shows.) The sequel maintains the light, comic tone of its 2015 predecessor, so the fact that everyone here has jokes isn’t nearly as jarring as it was in something like Thor: Ragnarok. This particular corner of the MCU also continues to be refreshingly self-contained: instead of hopping from continent to continent (or planet to planet), Ant-Man and The Wasp is set almost exclusively in San Francisco, which results in some clever, kinetic chase sequences.

Director Peyton Reed returns to helm the sequel, and it feels like he’s more confident and at-ease with the material. (Reed took over the would-be franchise after Edgar Wright, who spent the better part of a decade developing Ant-Man and cast the main roles, left over creative differences.) The director has plenty of fun with Hank’s shrinking (and enlarging) technology: I particularly enjoyed the convenience of Hank’s mobile lab along with the faulty regulator in Scott’s suit that causes him to change size unpredictably.

Rudd continues to be the nicest crook in cinematic history. The actor is the sort of pleasing presence on screen who can share adorable moments with his on-screen daughter, while still generating sparks with Lilly. Speaking of Lilly, the actress takes full advantage of the fact that she now shares top-billing in a big-budget superhero movie. Sporting a much less severe haircut than she did in the previous movie, Hope is mercifully allowed to have some fun while kicking butt and fighting for her family. Meanwhile, Douglas continues to be comically cranky, so it isn’t surprising to learn that Hank has rubbed a bunch of people the wrong way over the years.

Although Ant-Man and The Wasp is certainly smaller in scale than its superhero brethren, the movie still feels overstuffed. To be fair, Michael Pena earned the additional screen time he gets here as Scott’s motormouth best friend: the sequel brings back his great signature bit of recounting a story while other actors mouth his words during a sequence where we learn whether truth serum really works. Laurence Fishburne, on the other hand, ultimately feels a bit underutilized as a former colleague of Hank’s. Still, the most egregious misuse of talent is the movie’s handling of Pfeiffer. The actress is still as radiant as ever, but she barely gets anything to do in the film’s latter half, which is puzzling because the entire story revolves around saving Janet. (Rudd actually makes a far stronger impression as Pfeiffer than Pfeiffer does during a wild scene where Scott channels Janet.)

There’s also an overall lack of dramatic tension in this film. Ghost is ultimately more desperate than dastardly. Meanwhile, Walton Goggins pops up as Sonny Burch, an oily black market crook who wants to profit from Hank’s quantum tech. He’s amusing for a secondary antagonist, but it’s hard to take him (or anything else in this movie) too seriously. Along those same lines, Randall Park is quite funny as FBI Agt. Jimmy Woo — who is perpetually several steps behind Scott and his friends — but this movie didn’t exactly need yet another goofball.

Ant-Man and the Wasp is presented in its original aspect ratio of 2.40:1. The 1080p image is arrived at with an AVC MPEG-4 codec at an average of 32 mbps. The sequel is largely set in San Francisco (as opposed to a far-off Galaxy or a fictional place like Wakanda). The result is a more earthbound image with a pleasing amount of texture that is brought to life on this Blu-ray. There’s also extraordinarily fine detail on everything from Scott, Hope, and Ghost’s costumes to the high-tech machinery in Hank’s lab. Of course, the glaring exception to the movie’s more realistic look is the Quantum Realm, which explodes to life with a dazzling array of colors. Ant-Man and The Wasp may be a smaller-scale superhero movie, but the visual presentation remains top-notch.

The extremely energetic DTS-HD Master Audio 7.1 track is an absolute perfect match for this big-budget superhero adventure. The two extra channels are most noticeable during any foray into the Quantum Relam, with sounds echoing and whooshing from one speaker to another in a sort of disorienting dance. The subs are also deployed masterfully during action sequences; whenever our heroes are tiny, normal-sized objects that now appear massive to them sound as if they’re causing an earthquake and help immerse us in the outrageous action. Beyond that, every element in this track — including Rudd’s many one-liners — are perfectly balanced, as all things should be.

Making-Of Featurettes: (22:30) There are four featurettes: Back in the Ant Suit — Scott Lang is a lovefest for the funny and likable Paul Rudd, who (according to director Peyton Reed) brings to life “the real everyman” in the Marvel Cinematic Universe; A Suit of Her Own — The Wasp focuses on Evangeline Lilly’s Hope Van Dyne suiting up as The Wasp. We see how the design of the costume evolved from the end of the first movie, along with some cool camera tests and fight training; Subatomic Superheroes — Hank & Janet centers on screen legends Michael Douglas (who still can’t seem to believe he’s part of the MCU) and Michelle Pfeiffer (who was a big fan of the first movie); and Quantum Perspective — The VFX and Production Design of Ant-Man and The Wasp is about all the ways this sequel had even more fun shrinking and growing items during action sequences. There’s also a peek behind the design of Hank’s massive (miniature) mobile lab. Features a Play All option.

Gag Reel and Outtakes: (3:47) There’s a standard Gag Reel with flubs and the actors goofing around; Stan Lee Outtakes has the comic book legend gamely firing off alternate punchlines for his customary cameo; and Tim Heidecker Outtakes unleashes the comic actor as the movie’s whale watching tour captain. Features a Play All option.

Deleted Scenes: (1:38) There are two scenes and they both feature optional commentary from director Peyton Reed; one of them give us an intriguing glimpse at how Janet survived in the Quantum Realm for so long, while the other is much more inessential and shows Sonny and his crew on the hunt for Scott. Features a Play All option.

Audio Commentary: Director Peyton Reed notes early on that Ant-Man and The Wasp is not only a sequel to the first Ant-Man, but also Captain America: Civil War. The filmmaker talks about wanting the movie to look photorealistic (the sequel is set in San Francisco, not Asgard) and discusses the evolution of each character following the first movie. Reed also cites Elmore Leonard novels (with their different levels of antagonists) as an inspiration for the story and pokes fun at the obligatory “shirtless hero shot” every Marvel movie with a male star has to include.

Ant-Man and The Wasp is unquestionably the lowest-stakes movie in the MCU. (I mean, the movie barely has a villain.) Then again, this movie’s lack of tension is probably a welcome reprieve for many people after Infinity War. (By the way, stay through the credits to learn where Scott and company were during Thanos’ romp through the MCU.) For better and worse (mostly better), Ant-Man and The Wasp is like a tasty, bite-size snack following the five-course meal that was Infinity War.