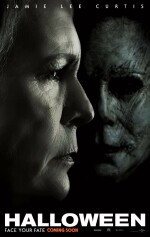 “I always knew he’d come back. In this town, Michael Myers is a myth. He’s the Boogeyman. A ghost story to scare kids. But this Boogeyman is real. An evil like his never stops, it just grows older. Darker. More determined. Forty years ago, he came to my home to kill. He killed my friends, and now he’s back to finish what he started, with me. The one person who’s ready to stop him.”

I was 17 years old when John Carpenter released The Shape, aka Michael Myers, on the world in 1978. It was a milestone film. Of course we didn’t know we were watching something that would become so culturally huge. We were the target audience. Teens who were looking for some extra thrill in our films. These so-called slasher films became great escapes of fantasy to bring a date along. For a late-teen, there’s no better way to spend an evening with a date than a film that might have her jump right into your lap. Great times. But the reason Halloween stands out from the crowded genre is because John Carpenter knew something about anticipation. He knew how to build towards a scare. And he understood how to use music, shadow, and pacing to truly immerse his audience into a film. I didn’t watch Halloween in 1978. I experienced Halloween in 1978.

This film ignores all of the sequels including the two films that Rob Zombie used to reboot the franchise several years ago. None of those things happened, and we re-enter Haddonfield 40 years after the events of the original story. Michael Myers (Nick Castle) has been living in an asylum, where he hasn’t spoken a word since his arrival. Very much like the first sequel, it is decided to transfer him to another facility where he can perhaps be better studied. We all know how that transfer is going to go. We literally saw it before. Now Michael is on the loose and looking for his original victim, who here is not identified as his sister. That connection has been removed from the Halloween mythology with this release.

We find that Laurie Strode (Curtis) has not had it much better than Michael has these last 40 years. The events of that night in 1978 have damaged her considerably. She’s estranged from her daughter and granddaughter, who consider her quite mentally unbalanced. She has become one of those crazy survivalists who builds an underground bunker and hoards plenty of supplies and weapons. She’s built traps all over her home. Except this survivalist isn’t anticipating civil unrest or nuclear devastation. She’s anticipating the inevitable release of Michael Myers. She has reached a point where she’s not so much dreading his return, but looking forward to it. Certainly, she fears for her family who won’t take her warnings or ravings seriously, but she’s very much looking forward to ending her own nightmare with extreme prejudice.

Of course, it’s always wonderful to see Jamie Lee Curtis back in the role she originated. She was the highlight of the sequel films she participated in and has been a fighter for the franchise all of her life. John Carpenter’s limited participation is also a treat for the fans. It was also an extra bonus that Nick Castle returned to the role of Michael or The Shape. He only played the role once before, and that was the original film. All of these nods to the first film have made the anticipation of this movie so much more than it already would have been. Unfortunately, it also brought with it great expectations, and not the Dickens kind. I’ve preached for decades that expectations kill, and that’s certainly going to be a huge factor on the general reaction to this film. The younger fans will love it, I think, and it will make a ton at the box office. Those of us old enough to have seen the original at the cinema will not feel so kindly toward this incarnation.

The truth is that this collection of filmmakers that include the unlikely addition of Danny McBride as a writer doesn’t understand what made Halloween great at all. Yes, John Carpenter was involved as a producer, but his only great contribution to this version is the wonderful music, most of which was created for the original. This team has merely made yet another modern slasher. It’s admittedly better than most current horror films, but it’s not Halloween. Perhaps it’s not possible to make Halloween in the modern age. As I watched this film, the overwhelming sensation that I couldn’t shake was how much that film belonged and still lives in the 1970’s. A Halloween with a rave party just doesn’t compute. My brain rejects it outright as something very much out of time. The spirit, if you will, of Michael Myers doesn’t survive the time-travel journey to 2018.

There is also the problem of the narrative being too split between characters at different locations. This movie doesn’t have the laser focus of the 1978 film. That movie didn’t stray too far from one place, and it gave us a thick atmosphere that this film doesn’t even pretend to create. There are some nice homage moments that include some footage from the first film. I actually liked the concept of having Laurie and Michael in somewhat switched roles, with Laurie actually being the predator now. It’s a pretty sound idea, and there are a couple of moments where they play on images of the first movie to demonstrate that reverse-role idea. Curtis delivers an excellent performance, but the supporting cast just don’t rise to her level. People still get killed, not by Michael, but from sheer stupidity, and that common thread in horror movies has always irritated me somewhat. Instead of making the predator clever and cunning, let’s just throw meat at him and watch him devour. That’s lazy writing and all too often the template for horror films. A few years ago it was even spoofed for an insurance television commercial.

I feel a little sorry for the generations of Halloween fans who have only seen the film on an iPhone or on television. Those same generations have viewed the film likely after or along with the countless copies over the decades, the endless sequels that have somehow tainted the true atmosphere and sheer brilliance of that first film on a large cinema screen. This was supposed to be about atmosphere. “There’s a reason we’re supposed to be afraid of this night.”

Gino Sassani is a member of the Southeastern Film Critic's Association (SEFCA). He is a film and television critic based in Tampa, Florida. He's also the Senior Editor here at Upcomingdiscs. Gino started reviewing films in the early 1990's as a segment of his local television show Focus. He's an award-winning recording artist for Omega Records. Gino is currently working on his 8th album Merchants & Mercenaries. Gino took over Upcomingdiscs Dec 1, 2008. He works out of a home theater he calls The Reel World. Favorite films: The Godfather, The Godfather Part II, The Body Snatcher (Val Lewton film with Karloff and Lugosi, not the pod people film), Unforgiven, Gladiator, The Lion King, Jaws, Son Of Frankenstein, The Good, The Bad And The Ugly, and Monsters, Inc.
The Oath “31 Nights Of Terror” Ash vs. The Evil Dead: The Complete Collection