“31 Nights Of Terror” Ash vs. The Evil Dead: The Complete Collection

Posted in: Disc Reviews by Brent Lorentson on October 20th, 2018 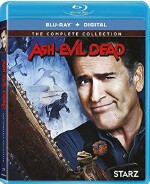 From the moment that STARZ announced that they were pulling the plug on Ash vs Evil Dead after its third season, my heart has been a bit crushed.  The Evil Dead franchise has always been special to me. Growing up I watched the trilogy of films to the point one may consider I had an unhealthy obsession with these films, and to be fair, they may have had a point, but these movies were a blast.  These were the films where writer and director Sam Raimi made a name for himself in the horror genre with his cinematic style, over the top gore, and injecting his love of The Three Stooges.  For decades fans had waited patiently for a fourth installment in the franchise, with teases of there even being an Ash vs Freddy vs Jason, but alas that concept fizzled as a film.  So when the news came along that STARZ would be bringing Ash (Bruce Campbell) to the small screen for a 10-episode series, well, it was something horror fans could get excited about.

When we catch up with Ash, he’s pretty much the same as when we last saw him.  He’s a man stuck at a dead end job and living in a trailer park, but this is the lifestyle choice he’s made on his own.  He remains haunted by his past battles with The Book of the Dead, and of course the deadites, but in true Ash fashion he copes with it through alcohol and easy women.  It’s at his job that he meets Pablo (Ray Santiago) and Kelly (Dana DeLorenzo) who reluctantly find themselves mixed up with Ash and the return of the evil that seeks to be reunited with the Necronomicon.

What separates this from the first three films is that the first season plays out more as a long road film. The series opener “El Jefe” is helmed by Sam Raimi, who seems to slide back into his world of the Evil Dead with ease, quickly recapturing the tone and style he established over 30 years ago.  For those worried that perhaps being a television series would compromise the integrity of the show in any way, well, they don’t skimp on the blood and gore; the TV-MA rating is well earned here.

Season One also introduces us to Ruby (Lucy Lawless), who has her own agenda in attempting to attain the Necronomicon, and it’s her actions that help set up the series for the following two seasons.

Season One is definitely my favorite season of the series, but there is plenty of fun and gore in store for viewers throughout the rest of the series.

This is an unwelcome homecoming for Ash as he and his gang are forced to travel to Ash’s hometown, Elk Grove, Michigan, where the Evil seems to have a plan to take over the world.  Back home Ash is nicknamed Ashy-Slashy, a moniker that he is stuck with since the town seems to blame him for the murders at the cabin many years back when Ash first stumbled across the Necronimicon.

One of the fun additions to the series is Lee Majors playing the part of Brock Williams, Ash’s dad.  As a fan of The Fall Guy, seeing Majors on the screen again was a thrill.  We get to see where Ash gets his womanizing and drinking quirks from, and the dynamic between these two is great.

Season Two also manages to bring the gore in a big way. There is a morgue scene that involves Ash attempting to recover the Necronomicon from a corpse. This scene may go down in history as one of horror’s goriest moments.  It’s gross, it’s over the top, it’s just what you would expect from this show, and the rest of Season Two delivers.  Another favorite moment involves Ash’s classic car being possessed in Christine fashion and going on a killing spree.  Another fun treat this season involves Ashy Slashy as a puppet; this was something I didn’t see coming, and this was just the kind of goofy insanity that I love about this show.

This season opens up with a surprise no one really sees coming, though with all the random hook-ups Ash has, he meets his daughter, Brandy (Arielle Carver O’Neill).  Seeing Ash thrust into the parental role while the Evil is once again on the attack was a nice addition in my eyes.  As for Pablo and Kelly, it seems their hopes of having a normal life are simply smashed after they’ve gone their separate ways, though they inevitably come back together.

Ruby is back to being up to no good, but there is a new threat for our heroes this season, and  it’s one that builds to what could have been the ultimate fight between good and evil.  This is sort of my only complaint about this season; there is definitely a finality that hangs over the season, and it builds to there being a big showdown for the gang to confront, but when it happens…well, it’s simply too easy.  There is a lot of cool stuff over the course of Season Three, like when Ruby sets a trap at Brandy’s school dance and Ash going into the Rift, so you’d think the series finale would be something epic.  Well, almost.  It is set up to be big, and this is the first time Ash’s fate seems like it could be in jeopardy, but this ending is so abrupt, it’s hard to not be disappointed.  Then where the final minutes take us, honestly I hated it, and it just didn’t jive with where the series has taken us up to this point.

Sure, I’m thrilled we’ve gotten 30 episodes of a series that manages to kick all kinds of ass over the course of its run, but this ending just left me empty.  This has me thinking even more how abrupt this cancellation was, because I just feel the writers were setting us up for something bigger and perhaps becoming a torch passing scenario for these characters.  Though Campbell has said he is done with the character, I’m hoping we can see him at least one last time in a future Evil Dead film to pass on that torch.  I don’t believe the franchise is dead; it’s simply a matter of time before we see it return once again.

Ash vs Evil Dead is presented in the aspect ratio 1.78:1.  The 1080p image is arrived at with an AVC MPEG-4 codec at an average of 28 mbps.  This is a great looking show.  The picture is sharp throughout and plenty of detail is captured here. The use of over-lighting helps with capturing some of the detail in the darker scenes but it’s the added grain to the night shots that help give us the 16 mm film feel that we got in the first film.  The skin tones are all natural and the blood runs thick and red.  There are no compression issues; this is a pretty great looking release.

The True HD 7.1 track is bliss.  Now I’m only set up with a five speaker spread and the experience was still pretty impressive but a friend of mine pointed out he had a seven speaker set up so I head over to check this out with him.  After I picked my jaw up off the ground, this was an amazing mix. The bass is heavily utilized but the moment where I truly appreciated the speaker spread was when The Evil first comes through the woods.  It’s a mixture of haunting and creepy with a splash of a cartoonish environment which is basically what the show is.  When the chainsaw revs up and we see Ash go into action with the music cues, how the speakers are all utilized it’s great.

Audio Commentary: For season one each episode comes with its own commentary track with the directors and stars of the show, the people on the tracks very per episode but each track is fun and insightful.  Campbell and Raimi manage to carry the tracks they are on and are just a blast to listen to if you’re fans of the films or just of the individuals.

Seasons two and three also have commentaries for select episodes.

Inside the World of Ash vs Evil Dead: (15:59) An episode by episode synopsis with a quick interview segment and some BTS footage of a key moment in the episode.

How to Kill a Deadite: (2.31) Pretty much a quick question to the cast about how they feel is the best method to kill a deadite.

Best of Ash: (1:27) A collection of clips with Ash saying something funny or killing a deadite.

Inside the World of Ash vs Evil Dead: A quick look at each episode where the producer talks about the episode.

Up Your Ash: (2:00) A look at what went into that crazy morgue fight scene.

Women Who Kick Ash: (2:00) A way to brief look at the women in the show, this should have been a lot longer.

Puppets Are Cute (1:00) Another extra I wish we got more time with about the puppet used in the show.

Dawn of the Spawn(1:00) A brief bit about Ruby’s demonic children.

Bringing Henrietta Back (2:00) A brief look about a fan favorite from Evil Dead 2 that makes an appearance this season.

How to Kill a Deadite- Fatality Mash-up (3:00)  A fun bit about creating the effects and a montage of all the gore in the series.

Inside the World of Ash vs Evil Dead: Another brief look at each episode of the season while discussed by the producer.

While I’m sad we only got 3 seasons, I’m glad we got the series when it seemed that we would never get to see Ash again.  I love this show, it’s easily one I’ll be dusting off and re-watching many times down the road.  If you are a fan of the movies or simply love horror, this should be required viewing.  The love that went into this show is apparent and I the chemistry of the cast and all involved is just a small portion of everything that came together to make this show work.  I hope in the not too distant future there will be more of this world brought to the screen for us to enjoy.

Brent Lorentson is a horror writer and film critic based out of Tampa, Florida. With a BA in Digital Film, he co-wrote and co-directed Scavenger Hunt. His short stories have appeared in various horror anthologies. In 2019 his short script Fertile Blood will be a part of the anthology horror film Slumber Party. He is currently working on his first novel A Dark and Secret Place set to be released in late 2019. Favorite Films: Taxi Driver, Fight Club, I Saw the Devil, The Wild Bunch, Dawn of the Dead, A Clockwork Orange, Pulp Fiction, Heathers, The Monster Squad, and High Fidelity.
“31 Nights Of Terror” Halloween (2018) City Slickers (Collector’s Edition) (Blu-ray)