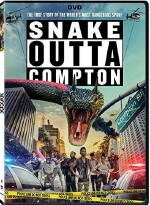 “You are about to witness the strength of snake knowledge.”

That’s me. In addition to being the senior writer here at Upcomingdiscs, I also have been a snake breeder for an even longer period of crimes. So, when a box arrived from our friends at Lionsgate with a rubber snake, a couple of syringe pens, and a movie called Snake Outta Compton, I knew this was one I was going to tackle. The snake in the box was rubber and caused no fright here. The syringe pens on the other hand… Let’s not talk about those. Snake Outta Compton attempts to bring the world of Snakes On A Plane to Straight Outta Compton. It’s a giant cold-blooded snake vs. some cold-blooded rapper wannabes. The result is a modern schlock-fest that looks like it escaped directly from the SyFy Network. This one is not for the weak. By that I mean the folks who walk out of bad movies. You might not even let your DVD player get warm.

The filmmakers wanted to be sure you didn’t miss the Straight Outta Compton spoof, so they used the same logo as that film used on the DVD cover. In case you might be inclined to miss the connection with Snakes On A Plane, the film begins with a plane flying over Compton, and you hear a Samuel L. Jackson sound-alike deliver the F-bomb-laced iconic quote as a snake drops from the plane to land in the streets. There it’s encountered by a young nerd named Vurkle (Essien) who looks and sounds like a popular television nerd. The name says it all. He happens to be a rather young street scientific genius and finds an embryo in the splattered reptile. He uses a ray he invented that grows the snake to be a giant in order to get revenge on the people in the hood who party all of the time. Of course, he loses control, and the snake starts eating the hood.

The film is populated with stereotypes of stereotypes. You have the corrupt cop that believes he’s really a hero. You have an old lady who happens to be a machine-gun-toting drug addict. And then there are the three rappers who are close to getting that big record deal. Pinball (Maurice) is a member of the group who borrowed money from a local hood to finance their music. He’s coming back to get his money, and here’s where the film features an awful “rap-off”. The entire plot plays off really bad street slang and people running from the big snake. The actors are all pretty low-budget citizens who do the best they can with a bad film.

The snake itself isn’t actually too bad. The f/x are sometimes better than they typical SyFy films. There are some moments when I was very impressed with how good it looked with so little money. A tighter script and a decision to go another way and not rely on being a spoof might have made this a quality small film. But the laughs are always forced, and there’s not enough meat here for the ghost of Ed Wood to make something out of.

You could call this an experiment, I suppose. “Experiment backfired.”

Gino Sassani is a member of the Southeastern Film Critic's Association (SEFCA). He is a film and television critic based in Tampa, Florida. He's also the Senior Editor here at Upcomingdiscs. Gino started reviewing films in the early 1990's as a segment of his local television show Focus. He's an award-winning recording artist for Omega Records. Gino is currently working on his 8th album Merchants & Mercenaries. Gino took over Upcomingdiscs Dec 1, 2008. He works out of a home theater he calls The Reel World. Favorite films: The Godfather, The Godfather Part II, The Body Snatcher (Val Lewton film with Karloff and Lugosi, not the pod people film), Unforgiven, Gladiator, The Lion King, Jaws, Son Of Frankenstein, The Good, The Bad And The Ugly, and Monsters, Inc.
Mamma Mia: Here We Go Again (UHD Blu-ray) (4K) Johnny English Strikes