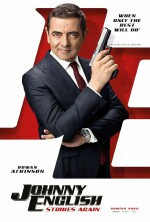 In Johnny English Strikes Again, English brings back his hilarious antics. The world’s security is threatened by an internet thief, and there is only one person who can save us all. This clumsy, blundering character who always manages to get the job done, even though it may not be with the intentions he set out to perform, is back in action. The greatest British agent of all time, Johnny English, is back, and he brings us more slapstick comedy than ever.

Johnny English (Rowan Atkinson) is a retired MI7 agent working as a geography teacher at a boarding school. After an internet cyber-attack to the British government, all British agents are now revealed. English is called in to find out who is behind this attack and what are they planning to do.

Now reunited with his longtime assistant and fellow MI7 agent, Angus Bough (Ben Miller), and Russian spy Ophelia (Olga Kurlenko), they together try to locate the mastermind and solve this case that threatens the world’s security. With the Prime Minister (Emma Thompson), trying to make a deal with a multi-millionaire’s computer company, time is running short for English and his crew to solve this case.

Director David Kerr puts together an entertaining story that will make you laugh as well as enjoy this character’s life as a spy. He presents the storyline well and includes everything that you would expect in this world of government agents. Along with Rowan’s delivery, they pull off this bungling, inept person who gives the world a British version of Inspector Clouseau. Together they keep this hilarious character with the same format that has given everyone much laughter.

This third film in the series continues with the same format as the previous two installments. It will make you laugh and entertain you, but it does not reach the scale of a masterpiece. All in all a good but entertaining flick that might be better on Blu-ray than at the theater.

I based my grade on this comical storyline that includes an eventful but entertaining adventure, along with a wonderful performance.

John Delia has been on all sides of the movie business from publicity, writing for publications and on line blogs, script writing, to film making. Writer, critic, film editor he has worked as a film critic on this second go around for 14 years. He earned his Bachelor’s degree at the college of Journalism and Communications at the University of Florida in Gainesville, Florida. John is an active member of the Southeastern Film Critics Association (SEFCA) . Favorite Films: Lord of the Rings/Hobbit trilogies, The Godfather trilogy, the Indiana Jones trilogy (I didn't like the 4th), The Avengers and for TV it's Game of Thrones. As for animation it's a tie between anything Pixar and everything Hayao Miyazaki.
“31 Nights Of Terror” Snake Outta Compton Hunter Killer