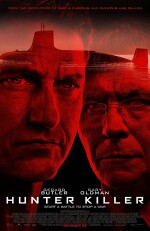 “When someone is shooting at you, you know their intentions.”

Submarines have had their own fascinations since Leonardo da Vinci first designed one. Jules Verne took us 20,000 Leagues Under The Sea and used a fantastical submarine to inspire and dazzle readers for centuries. Even television has gotten into the act as Irwin Allen took us on a Voyage To The Bottom Of The Sea. But it’s the cinema that truly captured the idea of submarine warfare, from the German classic Das Boot to the equally classic Run Silent Run Deep. Modern films like Crimson Tide and The Hunt For Red October took advantage of modern f/x technologies to bring us even closer to the perilous depths. But things have improved significantly since then. Now with computer-generated images able to show us anything the mind can imagine, submarines are positioned to go to the next level. It’s all of that that I took with me when I went to see Hunter Killer. I got some of it before. But I can’t quite escape the feeling that I’ve seen all of this many times.

The American submarine hunter Tampa Bay has been playing a little game of cat and mouse with a Russian sub deep into Russian waters. Before anyone has a chance to get their own bearings, both ships are destroyed. When the mystery reaches the upper echelon of the Pentagon, there’s a scramble to figure out what the heck is going on and whether we are at war with Russia. Chairman of the Joint Chiefs of Staff Charles Donnegan (Oldman) is a hawk and wants the United States to answer with aggression. But Navy Chief Fisk (Common) is looking for a more measured plan and wants to gather better intelligence.

Two missions are put into place. The USS Arkansas is sent to see firsthand what things look like beneath the cold North Atlantic surface. It’s a submarine that recently lost their skipper and is taking on a new unknown commanding officer in Captain Joe Glass. Both crew and captain will have to forge their trust on the job. The second mission is a crew of for special ops soldiers who parachute deep in Russian territory for a recon mission to send info from the Russian Naval Headquarters to the Pentagon. That crew is led by Bill Beaman (Stephens). What they discover is that a Russian Defense Minister Durov (Gor) has organized a coup, and both Beaman’s team and Arkansas have a new mission. They have to rescue Russian President Zakarin (Diachenko), while the entire Russian military has no idea they’re actually trying to help or that there has even been a coup.

It’s an ambitious story that adds an element away from the traditional submarine story. Screen time has to split four ways to bring us these various elements that will come together at some point. Common and Gary Oldman have the job of playing the two officers at the top who want to handle things in very different ways. Unfortunately, Gary Oldman is somewhat wasted here. He has little screen time, and most of it has him merely just flying off the handle. This isn’t a guy we really get to know except on his worst day and under pressure. Common gets to hold the reasonable ground, and at least we get to see his mind work. We get to follow his logic for a little bit, and he ends up the stronger of these two characters.

Gerard Butler is the unknown captain who has to make some calls that sound like treason to some of his officers. He has an instinct about what is happening, and he has to fight to earn the crew’s trust, particularly when he allows a rescued Russian sub captain access to classified technology and orders his crew to follow his lead. Understand these guys don’t know anything about Captain Glass, and they believe the Russian captain just killed their brothers on the Tampa Bay.

On the ground we have two stories going on. The film’s pace doesn’t really do justice to the coup material. Both the Russian President and Minister Duprov get no character development, and things appear to happen much too quickly and more than a little unlikely. A good script could have positioned the audience in a better place to buy the takeover.

The best part of the film never happens on a submarine or in that oddly-shaped building in Washington. The four-man team led by Beaman is the most compelling part of the film. Toby Stephens is no stranger to readers here. I recently posted an interview with him for Black Sails: The Complete Series from Lionsgate. He’s far more dynamic than Gerard Butler, and it’s really not Butler’s fault. While he’s stuck giving orders in a tin can, Stephens gets to infiltrate a high level Russian base with just four guys and what they can carry on their backs. All of the film’s tension and drama plays out on the ground, even if it doesn’t take as much screen time to deliver. When that operation starts to head into those same unbelievable moments, I was a tad more forgiving, because I was so much more invested in those characters, and Toby Stephens is a big reason why. The man throws off a huge authoritive presence without really having to look like he’s acting. He easily exudes the kind of personna that you can accept people following him into what is pretty much a suicide mission. Give most of that credit to the actor.

The film is already quite long at two hours. Still you’ll walk away with the feeling that you missed so much of the story. Director Donovan Marsh is a bit green. This is the first feature film he’s directed with any kind of budget or box office potential. That greenness makes itself known through the film’s pacing. He can’t seem to hold a tense moment even with huge stakes looming. He doesn’t earn our trust enough to take us into extremely unlikely territory. And he doesn’t allow his performers the room to tell their story. With experience perhaps Marsh will develop a better understanding of the flow of a film of this size with this many moving pieces.

Give the writers credit for assembling a Cold War movie that takes place after the Cold War. Its rather interesting premise is more clever than most of these films of late. There was a better story within the story, and perhaps it really did need to be 40 minutes longer. The film takes you right to the edges of genuine thrills and intrigue, but Marsh doesn’t appear ready to takes us that single step farther to sell the deal.

Where the film absolutely excels is the underwater f/x. The subs themselves and their movement underwater are some of the best I’ve seen. It was enough to cause me to forgive a really bad f/x moment when Captain Glass is being given his orders next to his new command sub. It’s one of the most obvious acting against greenscreen I’ve seen in a big-budget film. I would almost want to see how Marsh would do this again after what he’s learned here. There’s huge potential here, but in the end there’s nothing inspiring, and too much time is spent delivering the overused submarine movie tropes. Accept it for the ride that it is, and try and ignore the rookie mistakes. The film does have its moments. “Well … that’s a start.”

Gino Sassani is a member of the Southeastern Film Critic's Association (SEFCA). He is a film and television critic based in Tampa, Florida. He's also the Senior Editor here at Upcomingdiscs. Gino started reviewing films in the early 1990's as a segment of his local television show Focus. He's an award-winning recording artist for Omega Records. Gino is currently working on his 8th album Merchants & Mercenaries. Gino took over Upcomingdiscs Dec 1, 2008. He works out of a home theater he calls The Reel World. Favorite films: The Godfather, The Godfather Part II, The Body Snatcher (Val Lewton film with Karloff and Lugosi, not the pod people film), Unforgiven, Gladiator, The Lion King, Jaws, Son Of Frankenstein, The Good, The Bad And The Ugly, and Monsters, Inc.
Johnny English Strikes “31 Nights Of Terror” Haunting Guide Part 1: Mill Creek Entertainment