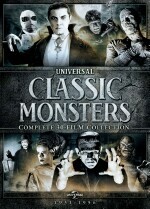 After nearly 90 years the Universal Horror cycle stands as one of the most enduring collection of horror movies today. Their influence on modern horror is unmistakable. There have been literally thousands of incarnations of Dracula, The Wolf Man and Frankenstein’s Monster, but the first image that comes to your mind will always be the nightmare creations of those Universal films. Studio head Carl Laemmle, Jr. was trying to break away from his father’s control and create a studio culture of his own. The results would start in 1931 when an unknown Hungarian actor named Bela Lugosi jumped from the stage to the screen in Dracula directed by Tod Browning. Laemmle’s niece, Carla Laemmle, is the girl in the coach headed for Borgo Pass as the film opens to the musical strains from Swan Lake. She is reading a travel brochure about vampires and thus speaks the very first lines ever spoken in a horror film in the era of sound. Lugosi was mesmerizing, and the film was a hit. There was a depression on, but that didn’t stop crowds from lining up around theater blocks to be hypnotized by Lugosi’s Dracula.

The success was deafening, and Universal had a new horror star. Plans were immediately begun to follow up Bram Stoker’s gothic classic with another horror classic novel. This time Lugosi would play the monster in Mary Shelly’s iconic cautionary tale Frankenstein. But Lugosi wanted no part of the role. He thought it would be silly to flail about and grunt throughout the film. He passed. Could Universal catch lightening in a bottle with another relatively unknown? Enter Boris Karloff. He had already been in a great number of films but hadn’t found the right movie to give him the same kind of recognition as the so-called leading men of the time. That all changed with Frankenstein. and suddenly Universal had two horror stars.

The hat trick came when the son of the silent-era master Lon Chaney was looking to break out. Lon Chaney Jr. wasn’t quite the makeup master that his father was, but Universal didn’t need that any more. They had Jack Pierce, who would go on to inspire nearly a hundred years of makeup artists to this very day. When Lon Chaney, Jr. morphed into Pierce’s Wolf Man makeup, he was transformed, and so was the Hollywood movie business. Universal had its triumvirate, and movies were never going to be the same.

I’m often asked why I love movies so much. I can out-marathon anyone on this staff. I could literally spend days watching movies. It all started with my father. We actually didn’t have a lot in common when I was young. He worked a lot, so I didn’t have that ball-throwing experience that many sons share with their fathers. But he loved horror movies. He would buy Famous Monsters Magazine and pass it on to me when he was finished. Little could either of us know that I would get to become friends with the magazine’s editor and driving force, Forry Ackerman. We also used to watch the “Creature” and “Shock” programs that came out of the Philadelphia independent stations in the late 60’s and 1970’s. It was there with my dad that I was first exposed to Frankenstein, The Mummy, The Wolf Man, and finally The Creature From The Black Lagoon, which would become my favorite.

These films weren’t necessarily frightening. But it was at the feet of these monstrosities that I learned many of the joys of film itself. These films made wonderful use of shadow and light to tell a story. James Whale created an entirely new style of directing which allowed his use of frame and lighting to actually tell some of the story. These monsters were not just mindless evil beings out to kill and destroy. There was always a pathos to the performances and rooted deep into the stories. Anyone can scare you. But these actors and writers gave us complicated emotional characters that you could, in some ways, relate to. It wasn’t Frankenstein’s Monster’s criminal brain that drove him to kill. It was his intense feeling of isolation and the cruelty inflicted because he was different. Hell, teenagers can relate to that big-time. These films taught me the magic that a film can perform. I learned to look for those small things that made all the difference, and I discovered that it all related to film in general. Karloff, Lugosi and Chaney were my teachers, and they opened up an entire universe that I still enjoy exploring today.

As time passed, my love of the cinema grew strong. I could spend an entire day at the movies, often having to watch the same film over and over again. When Star Trek: The Motion Picture came out, I led a posse that watched that film over and over from 10:00 AM until well after midnight. And that wasn’t even a great film. It wasn’t until home video matured that I was able to see these films, often for the first time uncut. It started with VHS and went to CED videodiscs, laserdiscs, DVD, and finally Blu-ray. Universal doesn’t put these things out with any kind of regularity. But finally the bulk of the Universal horror films are all together in one collection of 30 horror classics.

Here are the included films:

Creature From The Black Lagoon (1954)

Abbott And Costello Meet The Mummy (1955)

The first two Creature films are included in 3D, and they look absolutely stunning.

The collection brings together the individual legacy collections. That means all of the related films can be found in one case. The problem with that is you end up with three copies of each of the House movies and three copies of Abbott aAnd Costello Meet Frankenstein. It’s a bit of a nuisance, but a small one in order to have all of these films in one place. Watch the House films from the Dracula set, because there are only two films instead of three, and you get a better bit-rate and noticeably better image.

If you’re a fan, I don’t have to tell you how important this collection is. It’s also worth upgrading from the last Blu-ray set where the discs were stored in sleeves. Here they are in plastic cases and better protected. You get a nice full-color booklet that talks about the major films with some fun facts. All of the bonus features going back to the DVD collections are retained here. There’s plenty to keep you busy for many Halloweens to come. Sit back and “Listen to them. Children of the night. What music they make.”

Gino Sassani is a member of the Southeastern Film Critic's Association (SEFCA). He is a film and television critic based in Tampa, Florida. He's also the Senior Editor here at Upcomingdiscs. Gino started reviewing films in the early 1990's as a segment of his local television show Focus. He's an award-winning recording artist for Omega Records. Gino is currently working on his 8th album Merchants & Mercenaries. Gino took over Upcomingdiscs Dec 1, 2008. He works out of a home theater he calls The Reel World. Favorite films: The Godfather, The Godfather Part II, The Body Snatcher (Val Lewton film with Karloff and Lugosi, not the pod people film), Unforgiven, Gladiator, The Lion King, Jaws, Son Of Frankenstein, The Good, The Bad And The Ugly, and Monsters, Inc.
The Matrix Trilogy (UHD Blu-ray) (4K) Bohemian Rhapsody