Posted in: The Reel World by Gino Sassani on November 1st, 2018 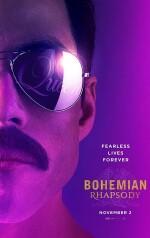 “Is this the real life or is this just fantasy?”

I think even Queen’s biggest fans might have trouble distinguishing between the two in the Freddie Mercury/Queen biopic Bohemian Rhapsody. And that’s absolutely okay. If you look at the film’s trailers, the movie looks less like a bio-film and more like a celebration, and that’s exactly the kind of experience you’re going to have from beginning to end. I’m sure that a lot of film and Queen fans shared more than a little skepticism over the project. I know that I certainly did. But all of that magically disappeared when the first trailer hit the internet and we all watched in amazement as actor Rami Malek appears to be channeling the manic spirit of Queen front man Freddie Mercury down to the smallest of detail. Suddenly I believed that everything was going to be okay. But just as our hopes and expectations were about to hit the ceiling, the film started gathering controversy after controversy like a snowball rolling down a steep hill in the winter. Everyone already had an opinion before the film was even finished. For months the web has been filled with issue after issue, and it all seemed to threaten the buzz we all got from the trailers. We’re going to talk about those issues, to be sure. If you let any of that filtercrap keep you from checking out Bohemian Rhapsody, you’re going to be missing the next best thing to actually seeing Freddie and the boys live in concert. Since that’s not going to happen, this is where you want to be.

The complaints have been legion. There’s been a lot of noise that the movie glosses over Mercury’s sexuality and eventual death due to AIDS. There’s no possible way you can walk away from the film feeling that way. Of course, that doesn’t dominate the trailer. Trailers are there to bring you the energy and positive from the movie. It’s not really the place for a social lesson on AIDS. The first point that needs to be made is that’s not what this film is about. The movie’s payoff is the band’s redemption, of sorts, at the Live Aid concert which was several years before Freddie’s death. Still, it’s hardly ignored. Freddie’s relationship with Mary Austin (Boynton) provides much of the emotional heart of the singer. His own life and feelings about himself are measured strongly with his love for her and the moments when he realizes his attraction to men. That struggle is a huge emotional beat in the film. Malek does a tremendous job of playing that turmoil of self-discovery and self doubt. Allen Leech is a huge force as Freddie’s manager and lover Paul Prenter, who takes advantage of his vulnerability and leads Mercury into a path of self-destruction that alienates him from the band and eventually takes his life. But the film doesn’t stop there. It makes a point of allowing Mercury the dignity of finding a guy who helps to heal those wounds in his final years. It’s a wonderfully told part of this story that is far from ignored or given short shrift.

There were also mumblings from the likes of Queen guitarist Brian May, who expressed disappointment that what he thought was a film about Queen is actually a movie about Freddie Mercury, and he’s right to a great extent. But let’s face it. Mercury was a larger-than-life person, and the band had adjusted their own expectations to his powerful presence long ago. Obviously, May’s objections didn’t go so far as to keep him from appearing with his fellow Queen mates in a cameo toward the end of the film.

The largest controversy came from the firing of Bryan Singer with just weeks remaining in the film’s production. Who knows the real story? Apparently he did not get along with star Malek and allegedly threw things at him on set. Dexter Fletcher was hired to complete the film, but Singer gets the sole directing credit. The work is seamless, and you will not find any obvious changes in style or atmosphere on the film. I was actually eager to see how Fletcher did on the film, as he is directing another rock legend bio-pic with some of the same characters in the upcoming Elton John film Rocketman. Maybe this was a nice warm-up for that film.

The pace of the film was amazingly tight when you consider it runs for two hours and 20 minutes. It doesn’t take long for young Freddie to hook up with Brian May, Deacon Jones, and Roger Taylor as a band who had just lost their singer. With the usual montage segments we get to see them record their first demo, and suddenly they are selling out stadiums all over the world. Yeah, it happens quickly, and I would have liked to have lingered a little, but just like the sexuality issues, that wasn’t really the focus of the movie. It’s all leading to that iconic performance at the London stage of Live Aid, a show they nearly missed out on. It’s hard to imagine that event having occurred without them. The film does linger enough to give us some rather sweet moments. Mike Myers is cast as an EMI record label executive who passes on releasing A Night At The Opera because he just didn’t see it working. Of course, Myers is well known for the scene in Wayne’s World where they’re rocking out to Bohemian Rhapsody on a car stereo. It’s little touches like this that make the swift timeline more bearable. As a songwriter myself, I loved the discussions about writing the songs and everyone dumping on Roger Taylor for his lyrics to I’m In Love With My Car. It shows that even the band members had no idea what was coming. There’s enough time to savor the moments when the band was experimenting with new ideas. The soundtrack is loaded with plenty of Queen songs that will keep you tapping your toes throughout. I attended a couple of those 1970’s shows, and I’m pretty amazed at the attention to detail that went into recreating flashes of those tour dates.

Everyone has been marveling about Rami Malek as Mercury, and it’s all deserved. It’s an eerie performance that literally washes away that line between actor and character. This is Freddie Mercury on the stage. But it’s not just Malek. I’m impressed with Gwilym Lee as Brian May. He’s just as scary accurate. It’s not just the look. I don’t know if he’s a guitarist himself, but he not only pulls it off, but he has May’s style down to each little nuance. No two guitarists look quite the same, and it’s obvious that Lee spent some time studying Brian May. The same is true for the rest of the cast. Whatever Singer’s problems turned out to be, give him credit for putting together a strong cast. It’s no mystery why Fletcher could come in and finish the film seamlessly. All he had to do was get out of the way and let these actors be these characters.

For some the final 20 minutes might be a problem. The film is moving full-steam-ahead towards that fateful Live Aid performance, and you would expect that there would be a good amount of footage dedicated to reproducing the highlights of that set. The movie doesn’t do that. The entire 20-minute set is allowed to play out just like it did 30 years ago. All of the chatter and every note from the moment the band takes the stage. Some will consider that too much. I thought it was brave as hell, and so you leave the film with all of that energy and drive. If you’re old enough to recall the show, it will open up a floodgate of memories. And here’s the thing. They got even the smallest details right. The color of the green tape that identified Freddie’s piano mic is exactly what it was at the original show. I have an old videotape of the concert, and I’m blown away by the attention to detail here. Honestly, it’s that kind of attention to the smallest nuance that makes this film feel so authentic. I can honestly say I’ve never experienced a rock bio-film that felt this authentic. Literally, “It sends shivers down my spine.”

Gino Sassani is a member of the Southeastern Film Critic's Association (SEFCA). He is a film and television critic based in Tampa, Florida. He's also the Senior Editor here at Upcomingdiscs. Gino started reviewing films in the early 1990's as a segment of his local television show Focus. He's an award-winning recording artist for Omega Records. Gino is currently working on his 8th album Merchants & Mercenaries. Gino took over Upcomingdiscs Dec 1, 2008. He works out of a home theater he calls The Reel World. Favorite films: The Godfather, The Godfather Part II, The Body Snatcher (Val Lewton film with Karloff and Lugosi, not the pod people film), Unforgiven, Gladiator, The Lion King, Jaws, Son Of Frankenstein, The Good, The Bad And The Ugly, and Monsters, Inc.
“31 Nights Of Terror” Universal Classic Monsters: Complete 30-Film Collection Dragnet (Collector’s Edition) (Blu-Ray)