Fantastic Beasts The Crimes of Grindelwald

Posted in: The Reel World by Gino Sassani on November 19th, 2018 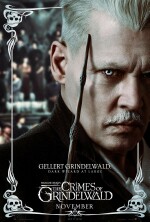 “The wizarding and non-wizarding worlds have been at peace for over a century. Grindelwald wants to see that peace destroyed.”

Back in the early days of the internet before videos went “viral”, there was a Thanksgiving cartoon about a chef who needed to serve too many people with a small turkey. So to compensate, he kept stuffing that sucker until it eventually exploded. Watching the latest entry in the J.K. Rowling Wizarding World, I was very much reminded of that early video. There’s an attempt to make the running time a bit leaner than we’ve typically seen with these films. It’s just barely over two hours, making it one of the shortest running times in the series when you include the Harry Potter films. But it doesn’t appear as if there was an accompanying cut of “stuff” going on. Rowling and director David Yates have crammed so much into the film that it gets very difficult to really keep up with it all. I left with a feeling that I had been overwhelmed. It’s a semester college course in three days. Of course it’s loaded down with exciting visuals and larger-than-life characters that have become a staple in the franchise and have incidentally made Rowling the richest woman on the entire planet. She’ll add a few shekels to the bank account, to be sure. The film will score huge with the box office take. But it serves little else but set up a game board. Its purpose is to identify the players and which side of the good vs. evil battle they will be playing for. It might just be the most expensive trailer ever filmed. But it’s one people will pay hundreds of millions to have a chance to see. Fantastic Beasts: Crimes of the Gindelwald is a Thanksgiving feast of truly monstrous proportions.

Johnny Depp finally gets to show off as the titular villain Grindelwald. He has been in prison, but we knew that those pesky dungeon walls weren’t going to hold him. You did know that, yeah? He makes his fantastic escape and goes forth to recruit followers. His story ends in this film with a gathering where the good guys think they have him trapped, but where he makes his big recruitment pitch. The film essentially ends with the players picking the side they intend to fight on.

Of course, there is so much more going on than that. We finally get back to Hogwarts, where a young Albus Dumbledore is played by Jude Law. It turns out that he can’t actually take on Grindelwald because of a magical oath that they share. It has been hinted from the start that the two shared a rather close relationship, and the edges of that are explored here. Our Hogwarts excursion also includes a trip back in time where Dumbledore was the Professor of the Dark Arts for young Newt Scamander (Redmayne). Dumbledore obviously sees something in the young man, and just as he would with young Harry in later years, he knows that Newt will have a big roll in the conflict to come.

Unfortunately, Eddie Redmayne can’t pull off the burden of this film in quite the way he could in the first. In the first film we were all caught up in his creatures and his desire to save them. The creatures make some delightful appearances again, but the character doesn’t appear to be up to the flurry of heavier story material that loads this film entirely too much. The whimsical performance makes him seem rather awkward and out of place when things start to get serious. I loved the character in that film, but he is lost to me here. There appears to be little connection between that world and this one.

There are so many other stories and characters going on that it’s easy to get a little lost here, and I can’t help the feeling that that was somewhat what Rowling intends for this movie. This overload can’t be an accident. She’s obviously a far more clever writer than to bog us down here by happenstance. So it’s deliberate. But why? Perhaps these films are really be made for box office take now. All of this material will require so many films to unravel, and a cool billion a throw isn’t a bad day’s work, is it?

That’s not to say the film isn’t trying to deliver a message. There is an overtly political association in Depp’s character who wants to rid the world of the Muggles, who he believes pollutes the world. It’s a dash of racism and a dash of CNN that isn’t quite so subtle. It’s not blatant enough to turn off a large segment of the audience. And what you really come for are the wonderful visuals that certainly dominate the screen. It’s nothing more than magic in a true sense. It’s enough to entertain. The film leads us to its rather dire warning that “The time is coming when you’ll have to pick a side.”

Gino Sassani is a member of the Southeastern Film Critic's Association (SEFCA). He is a film and television critic based in Tampa, Florida. He's also the Senior Editor here at Upcomingdiscs. Gino started reviewing films in the early 1990's as a segment of his local television show Focus. He's an award-winning recording artist for Omega Records. Gino is currently working on his 8th album Merchants & Mercenaries. Gino took over Upcomingdiscs Dec 1, 2008. He works out of a home theater he calls The Reel World. Favorite films: The Godfather, The Godfather Part II, The Body Snatcher (Val Lewton film with Karloff and Lugosi, not the pod people film), Unforgiven, Gladiator, The Lion King, Jaws, Son Of Frankenstein, The Good, The Bad And The Ugly, and Monsters, Inc.
Widows Fireworks (Blu-Ray)