Posted in: Disc Reviews by Michael Durr on November 20th, 2018 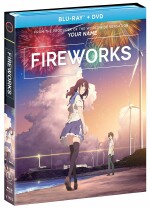 Young love is a wonderful concept that I wish could be sold and bought by the ounce, because I would either be rich or horribly addicted. Two people hopelessly absorbed by each other in a raging pool of hormones, bliss, and social media. It is a beautiful sight even if most of the time it is fleeting and gone in the blink of an eye. But what if you could change those decisions that made love lost and make it blossom again? Then you might just have Fireworks, a new Japanese anime from the producer of Your Name. Let’s take a look.

We open to a boy and girl who are falling to the bottom of an ocean. The boy is trying to help the girl, who appears to be unconscious and about to drown. He shouts “Nazuna”, and then we fade to black.

Today is the Fireworks at the Moshimo Shrine. We meet our male lead, Normichi, who is on the toilet. His mother is bothering him and letting the boy know that breakfast is on the table. Looks like we are having curry again. Normichi is attending school on summer break, and he is eager to get to school. After he finishes eating and talking to his dad, he bikes to school and is soon joined by his friends. Meanwhile, we see Nazuna on her way to school also via bike.

Normichi’s first gaze at Nazuna is as he sees her from across the way. She turns to him and he is broken out of his stare by his friends who have decided to argue about whether fireworks are round or flat. Still on his bike, Normichi next sees Nazuna at the beach but only gets to appreciate her beauty for a few moments. She appears to have a letter that she’s keeping close to her. As she looks out into the ocean, she sees a colorful sphere in the water. Nazuna decides to pick up the sphere out of the water and keep it.

Normichi is sleeping at his desk later that day at school. When his friends see Nazuna come into class, they fantasize about her. This includes his friend, Yusuke. Normichi acts uninterested, but when they look away he continues to admire her beauty. Later on, Nazuna gives a letter to the teacher, Ms. Miura, who realizes that Nazuna is moving away. It seems that her mother and new stepdad have decided to go elsewhere and take the teenager with them.

Later on, Nazuna is sitting by the pool, and Normichi is doing his best to actually clean the pool. A dragonfly lands on Nazuna’s face, and Normichi proceeds to get the dragonfly off her face. Eventually, the insect just flies away, but Nazuna is appreciative. However, as soon as she is about to ask Normichi something, he disappears. She rediscovers him across the pool with his friend Yusuke, and they are about to have a race.

Unbeknownst to her, the race is actually over Nazuna and the Fireworks celebration later. She proposes to both of the teenage boys that if she wins, then they have to do anything that she asks them to do. The two agree, and the race starts. Half way through the race, Normichi hits the pool awkwardly on his turn. This causes the colorful sphere to drop into the water. He forgets the race for a moment to watch the sphere. Nazuna easily wins the race, and Yusuke comes in second. As a result of the race, Nazuna asks Yusuke out to the fireworks later as part of the agreement.

However, later when Yusuke ditches Nazuna in favor of his friends, Normichi sees his opportunity to seize the night with Nazuna. But we soon learn that fate has a way of playing a cruel blow to the dreams of a teenage boy. At least until the boy discovers a way to combat it.

Fireworks deals with the concept of time travel and the ability to change history, so to speak. It is a beautiful romantic tale of two people who were perhaps not destined to be together. But in the end, we darn well know they should be. I thought the movie was well animated, and the story for the most part flowed beautifully. I really felt a sense of the world locking me in for the hour and a half and not letting go, even after the credits started appearing on the screen.

But the movie does have a couple of missteps. The time travel mechanism doesn’t make as much sense as it should. It seems inconsistent at times, even if we do understand the results. There is also a bit of a problem with the ending, as it is very open-ended, and we have to assume on what exactly is coming next. To be honest, the film is begging for a sequel; I’m just not entirely sure I want one, as it might end differently than my desired result.

The film is shown in a 1.77:1 widescreen picture. Wow, just wow. This is possibly the best looking Japanese anime I have ever seen. As mentioned with the story, the film with its beautiful art and scenery draws you in. Often times when I would think to focus on the characters, I’m obsessing over some small detail that I’m finding in the background. Or perhaps one of the sides where I am blown away by the animation.

Speaking of odd, massively detailed scenes, the bathroom scene with Normichi is a great example. Now stay with me a second, but the wood grain on the walls is just nuts in detail. Past animation, even anime, would have drawn it very simply. It would be a throwaway scene. Not here, and it only gets better in the village or when the Fireworks finally show up. It’s full of color, vibrancy, and depth.

Scenery isn’t the only recipient of tremendous depth, as objects and character design get a lot of attention too. Certain objects take on an almost 3D quality (windmills come to mind). There were no real flaws I could find in the picture, and from somebody who has upgraded to 4K in the last couple of years, that’s saying a lot with a standard Blu-ray.

The audio tracks are DTS HD 5.1 tracks for Japanese and English (dub). I stuck to primarily the Japanese track and used English subtitles. English SDH, English and French subtitles are provided. I found the voice talents to be very clear, direct and fit the tone of the animation on the screen. Normichi was rightfully wishy-washy in his speech patterns and stuck out well from the other male characters.

The English dub is slightly different in tone as everything takes a more pronounced attitude towards the proceedings. I can’t say I prefer it, but I do welcome it as a wonderful addition to the disc. Normally an English dub would be a curse to the disc release and something worth staying away from. Here it is worth a listen, especially if you have seen the movie before and need to hear the English language instead of reading subs.

Surrounds are used effectively as necessary, but the track does not go full-on blast for much of the film. It is a romance (with sci-fi elements) picture, and while there is opportunity for sound effects to stand out on screen, they are usually muted and saved for the big moments. When used, however, the effects are balanced and give us a little more incentive to be part of this world.

Behind the Scenes with the English Cast 10:40 : Michael Sinterniklaas is the English voice director for this film and talks us through a lot of the process. Stephanie Sheh was the casting director, and part of what I admire in this film is that they used an age-appropriate voice cast to produce the English translation. They also spend time with the two English voice leads in Ryan Shanahan and Brooklyn Nelson, who are very enthusiastic about their characters. Seems like a very enjoyable environment in which to work.

Theatrical Trailers 2:46: The English Trailer (2:02) and the US 30 Second Teaser(0:44) are included. I would have liked to see some of the Japanese trailers, but unfortunately not meant to be.

Fireworks, Should We See It from the Side Or the Bottom? as it was originally titled did fairly well in Japan and grossed about $26 million worldwide, which is pretty good for this type of film. It had mixed reviews, but I think the film was incredibly charming and showed a perfect picture of teenage love if it got one more chance at fulfillment. Maybe it’s because I have loved and lost, or perhaps I’m a sucker for romance that was meant to be.

The disc is missing out on the extras but provides a near perfect video and excellent sound presentation. Shout Factory has done a great job with the disc, and Shaft Animation Studio did a heck of a job with the animation. I will have to look into some of their other films (though they do not seem very cheap to obtain). However, Fireworks is released at a reasonable cost and comes heavily recommended, especially to those who wished for just one more chance at that red-haired girl. Take care and enjoy.

Michael Durr has been reviewing movies for the better part of fifteen years now. He primarily enjoys thrillers, sci-fi, animation and even a little courtroom drama. His favorite films include Escape from New York, the Goonies and anything with Alyssa Milano. When he’s not praising Kurt Russell as the greatest actor of our time or scratching his head over a David Lynch flick, he’s spending time at home in Texas with his lovely wife, Lori and his amazing son. How they put up with him is a mystery, but even Basil Rathbone doesn’t have the time to solve that one.
Fantastic Beasts The Crimes of Grindelwald The Original Christmas Specials Collection (Blu-ray)