Saved By The Bell: The Complete Collection 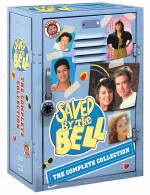 “The rest as they say is history… and math… and science.”

Saved By The Bell became somewhat of a cult classic and a teen icon of the 1980’s. It was likely the most popular out of prime time series on television for its run. What makes the show’s story so compelling is indeed its rather unique history. It actually all started as a badly failed NBC prime time situation comedy called Good Morning Miss Bliss. The show had been inspired by the network’s president Brandon Tartikoff, who had fond memories of a grade school teacher he once had named Miss Bliss. Yes, this was the famous guy who took NBC from last to first in the 80’s by creating the fabled “Must See TV” campaign. The show lasted six episodes and was quickly taken from the network’s schedule. NBC was finished, and what happened next truly is television history.

Good Morning Miss Bliss featured a passionate teacher from a midwest school named after JFK. She was young enough to be idealistic and related to her students. Her story wasn’t very compelling, but three of her students caught the eye of Peter Engel, who came up with a rather unconventional idea. Why not switch the school perspective from the teachers to the kids? He would move three of these students to a new school in California called Bayside. He would also bring along the old show’s principal, and without explanation they would all be on the new show. The new show was called Saved By The Bell. But the unique nature of this story doesn’t quite end there. You see, it’s hard to sell such a failed collection of characters for another network’s prime time schedule. That’s rarefied air, and shows rarely get that kind of second chance. So Engle decided not to make the show for the coveted slot. He saw that Saturday mornings were primarily children’s cartoons and wondered if they would accept a live-action show in the time slot. They not only accepted the concept, but it killed the cartoons in the ratings and providing ratings stats for the teen audiences that hadn’t even been collected before. At one point half of all teens watching television in that time slot were watching Saved By The Bell.

You see, when I was a kid, there were two reasons to get up early on Saturdays even when there wasn’t any school. The first was because my parents did their grocery shopping on Friday nights. That meant there was at least one new box of cereal in the kitchen. You wanted to be first, because in those days they had “prizes” in them, which were often cool plastic figures and other toys. The first one to the box stuffed their hands inside and “found” that toy. The second was to watch cartoons. Cartoons were a staple as much as that breakfast cereal, but that changed in the 1980’s with Saved By The Bell.

Mark-Paul Gosselaar stared as Zack Morris. He was the king of his high school starting in freshman year. He was the kind of guy who always had an angle. He’s had his eye on Kelly Kapowski (Thiessen) since grade school, and many of his schemes were intended to win her over. But life throws him a curve ball when army brat A.C. Slater (Lopez) shows up at the school and is able to give Zack some competition both as the school’s king of the hill and for the affections of Kelly. Part of the circle of friends was Screech, who quickly became the show’s most memorable character. He was played by Dustin Diamond. He was a geek and also the smartest guy in the group, but also the kid with the least street smarts and most socially awkward. That made him an easy victim to Zack’s schemes. There was Lisa Turtle, played by Lark Voorhies, who was the spoiled kid who had all of the material desires. She was also the unhappy object of Screech’s desires. Finally there was future Showgirls star Elizabeth Berkley as Jessie Spano. She was the socially aware student who always had a cause from the environment to feminism. Together they ruled the halls of Bayside under the overmatched eyes of principal Belding played by Dennis Haskins and the only adult character/actor to survive to the new show along with Zack, Kelly, and Screech.

The show had a few unique gimmicks. Zack often broke the fourth wall. He talked directly to the audience, usually to explain that things weren’t quite as bad as they looked. He also could freeze time and talk freely to the audience while everyone else stood frozen. While the entire premise was usually pretty silly, the show was brave enough to tackle subjects like drug addiction and abuse. The show also featured television’s first teen interracial kiss between Zack and Lisa. The first adult version was in the original Star Trek. Mr. Belding was usually Zack’s nemesis. but you always got the idea that he was quite fond of Zack. and there are moments when he, usually reluctantly, shows it. There was always a kind of cat-and-mouse game between the two, but it might have been the most dynamic relationship on the show. Zack also carried around something that was the envy of his school, which would today be quite routine. He had a cell phone, and it was about the size of a brick. Today, of course, three-year-olds have them, and they’re more slender than some credit cards.

There were some troubles on the set. Dustin Diamond was only 11 years old. He was much younger than the rest of the cast, but amazingly no one figured that out until he was entrenched on the show. Naturally, he wasn’t as mature as the others and started to alienate the other cast members. It was so bad that in reunion gathering specials his invitation was always “lost” in the mail. It turned out bad for the actor, who fell into that child-star-troubled life. His real-life antics have been the stuff of tabloids for years.

The series lasted four years, with each season a year in high school that ended with the show’s graduation. The final season ended up being an awkward one for the show because of some odd decisions by the production staff. Episodes from all three previous seasons that for some reason never aired were sprinkled into the final year, which created some odd continuity problems, particularly with what couple pairings were happening at the time. In an even more bizarre move, there were about 10 episodes filmed after the graduation finale but obviously intended to occur before that event. By that time Tiffani Thiessen and Elizabeth Berkley were no longer available, and Leanna Creel was added as the street-tough Tori, who became a love interest for Zack. But sprinkled within this run were episodes where Zack and Kelly were together.

Still, the show wouldn’t be defeated by the graduation of the cast and characters from high school. At somewhat the last minute it was decided to take some of the cast to the same college, and Saved By The Bell: The College Years was born. Only the guys were originally brought over. So Zack, Screech and Slater would end up in the same coed quad together. The chemistry wasn’t quite there, and Kelly was soon brought back as well. Unfortunately, the series is more appropriately called Saved By The Bell: The College Year, because that’s all it lasted. It was followed by two made-for-television movies that brought together the old cast.

Hawaiian Style brought the cast to Hawaii, where Kelly’s grandfather owns a resort that just so happens to be threatened by a bigger hotel who is trying to force him from his land so that they can expand. Of course, the kids come to the rescue.

Wedding In Las Vegas finally sees Zack and Kelly tie the knot, but not before they get into trouble by a redneck sheriff and a gang of mobsters.

Saved By The Bell continued into The New Class, which only ported Mr. Belding and Screech and is the only part of this franchise that is not included in this set. But the original series survives in syndication to this very day. The rest is all included on 13 discs with a separate disc featuring some bonus content talking with the showrunners as they look back on the series and its lasting impact. There’s a nice booklet with a synopsis for each episode and some historical notes. It took me a long time to get through this set, and it wasn’t so much a trip down memory lane for me. But I can imagine that kids of the 80’s remember it as fondly as I might Johnny Quest or Space Ghost, and so I can see why this set will be a really sweet treat. It’ll likely give some folks a craving for some Cap’n Crunch or Lucky Charms. It appears that, at least, hasn’t changed quite so much since I was young. If you’re game you should “Fasten your seatbelts. It’s going to be a bumpy ride through The Wonder Years.”

Gino Sassani is a member of the Southeastern Film Critic's Association (SEFCA). He is a film and television critic based in Tampa, Florida. He's also the Senior Editor here at Upcomingdiscs. Gino started reviewing films in the early 1990's as a segment of his local television show Focus. He's an award-winning recording artist for Omega Records. Gino is currently working on his 8th album Merchants & Mercenaries. Gino took over Upcomingdiscs Dec 1, 2008. He works out of a home theater he calls The Reel World. Favorite films: The Godfather, The Godfather Part II, The Body Snatcher (Val Lewton film with Karloff and Lugosi, not the pod people film), Unforgiven, Gladiator, The Lion King, Jaws, Son Of Frankenstein, The Good, The Bad And The Ugly, and Monsters, Inc.
Blindspotting (Blu-ray) Holiday Gift Guide Spotlight: Warner Brothers Television on Blu-ray