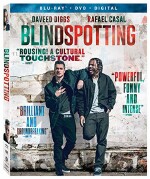 As the summer wound down from the season’s requisite anchor film blockbusters, there was increasing room for a few independent films that will make their way from the festival circuit to fill the newly vacated screens at your local multiplex. For some it was to attain eligibility for the year-end award season. For others it was a short window to turn a profit from what was conceived more as a work of art. For others it was a chance to become a sleeper hit. And for others yet, an opportunity to deliver a social message on the larger soapbox of the big screens. Blindspotting appears to be on the cusp of all of these things. But perhaps it came a little early for any awards consideration, and at a time where it was still competing with the mega-films of the summer. There’s no doubt that the film attempts to hit us with a message, but it falls just short of that accomplishment. Blindspotting works best as a character study, and it’s in that mode that the film almost approaches compelling.

As the film begins we meet Collin, played by Daveed Digs. He’s been in prison for severely beating a man at a club, and now he’s just days away from probation. His probation will last a year, where he’ll stay at a halfway house, work a job, and attempt to follow some simple rules that he doesn’t quite make. We jump forward, and he’s on his last three days of probation.  But his biggest problem getting through them will be his relationship with long-time friend Miles, played by Rafael Casal. Miles hasn’t had the sobering experience of prison and is still too wild to keep Collin out of trouble. But Collin is torn between his loyalty to his close friend and wanting to turn his own life around. It doesn’t help that in the short time he was in prison his neighborhood has begun to fall to gentrification, and he’s starting to feel alienated from his own life. Of course, he spends too much time with Miles. They work as partners for a moving company and spend most of their off hours together. Collin is starting to realize the harm the relationship is doing, but he might not be able to pull himself away before it ruins his second chance.

All of this is made nearly impossible when Collin has a life-altering experience while driving to his halfway house in the company truck. He’s stopped at a light when he witnesses a cop shoot a running and unarmed black man in the back. The news reports the incident far differently than Collin knows it happened. But he’s scared to get involved because of his own situation. Still, it gives him nightmares and occupies his thoughts to the point of obsession. Obviously, at some point he’ll be forced to confront this demon. What will he do when that day arrives?

Director Carlos Lopez Estrada is quite obviously attempting to drive this character study into a Black Lives Matter awareness project, but he doesn’t take enough bold steps to complete that connection. We never really get too deeply into the facts of the shooting, and beyond his nightmares we never quite see how Collin is processing the information. It’s almost a throwaway scene until a bit of a twist at the end brings it all home. Estrada appears hesitant to commit himself to one kind of a film. Instead he mixes in rather absurd moments and events that make the turn toward a black comedy. It’s his huge dilemma here. He wants to deliver a message, but he’s also wanting to entertain.

The cinematography is certainly unique and somewhat brave. There’s a street-level shooting style here that is often more compelling than the story. Estrada takes us deep into the seamy streets of Oakland. You can tell he understands his location well, and he wants so desperately for us to see what he sees and understands. In that point he succeeds quite brilliantly. The same can be said for the characters themselves. The two leads share some complex and often twisted chemistry, but it works. I was completely sold both on the characters and the relationship. I wanted to see more. And that’s where Estrada perhaps goes the farthest astray. He has a compelling relationship and good actors. It’s a good character study that the director appears to fight the entire film.

Blindspotting is presented in its original aspect ratio of 1.85:1. The 1080p image is arrived at with an AVC MPEG-4 codec at an average 30-35 mbps. The film has an almost documentary feel about it. Colors are all natural but with a decidedly video kind of a sheen to the entire image presentation. The image doesn’t have any kind of an organic feel to it, and I think that puts the viewer at a distance which is very much counter to the intended style. The film is almost a celebration of Oakland, and the locations attempt to bring the image alive. These guys want to show off their hood, and I totally get that. This would have been a great candidate for actual film which would have brought these locations to life far more viscerally. Black levels are quite good. There are plenty of night scenes with minimal source lighting that provide nice contrast, particularly when the leads are arguing under a single light in a parking lot. It’s actually a great scene and one of the best visually.

The Dolby Atmos defaults to a solid 7.1 track.  It’s in the audio presentation that the film experience brings you closest to the sights and sounds of these Oakland locations. The surrounds bring you the constant buzz from the streets that includes traffic, street lights, crowds, and the echoes of the streets. There’s a lot of care here used to deliver an authentic experience. Dialog comes through just fine. Your subs come alive mostly during much of the music. It’s also tweaked just right to bring some depth to the entire presentation.

Deleted Scenes: (6:18) There are five scenes with no individual selection option. Most of the extra footage here is more of the leads doing their rap.

Straight From Town – Making Blindspotting: (26:18) This behind the scenes feature focuses on the characters and the cast. There’s a rundown with all of the characters and a basic run-through of the social messages in the film. We also get a lot of the relationship between the leads, who wrote, produced and starred in the film.

Director’s Diary: (17:11) This was Carlos Lopez Estrada’s first film, and he chronicled the shoot with his cell phone. I like that he uses the time to introduce many of the crew people who are usually overlooked in this kind of feature. I give him a ton of credit for not using the time to blow his own horn, but to acknowledge people who worked hard for much less acclaim. That’s good on you, Carlos.

This is certainly a film that provokes both emotion and thought. It was a hit on the festival circuit but did not drive much box office gold. Of course, that’s not necessarily the intent here. The film’s a fresh change-up of the usual summer standards. Now with its release on home video, the film has a chance to stretch its legs and linger for a while. You can take it all in from the comfort of your home theatre. “To stare is to see.”

Gino Sassani is a member of the Southeastern Film Critic's Association (SEFCA). He is a film and television critic based in Tampa, Florida. He's also the Senior Editor here at Upcomingdiscs. Gino started reviewing films in the early 1990's as a segment of his local television show Focus. He's an award-winning recording artist for Omega Records. Gino is currently working on his 8th album Merchants & Mercenaries. Gino took over Upcomingdiscs Dec 1, 2008. He works out of a home theater he calls The Reel World. Favorite films: The Godfather, The Godfather Part II, The Body Snatcher (Val Lewton film with Karloff and Lugosi, not the pod people film), Unforgiven, Gladiator, The Lion King, Jaws, Son Of Frankenstein, The Good, The Bad And The Ugly, and Monsters, Inc.
Star Trek: Discovery – Season One (Blu-ray) Saved By The Bell: The Complete Collection