Posted in: No Huddle by Jeremy Butler on November 23rd, 2018 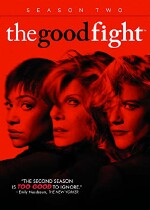 After the first season of The Good Fight, I was a fan. I never saw an episode of The Good Wife, but the first season of this series stood up very well on its own, and season two continues that good fight as it were. Last season ended on a cliffhanger with Maia’s (Rose Leslie, Game of Thrones) future seeming very grim after her father fled the country and basically left her holding the bag. Season 2 addresses those concerns right off and ups the stakes as a new violent movement sweeps Chicago, putting a target on the back of every lawyer in the firm. However, let me get to the person you are all probably most interested in: Diane Lockhart. Her character has come a long way from the disarray she was in during the previous season, becoming a name partner at the law firm and attempting to find a balance in her life as well as figure out the state of her marriage. Needless to say, The Good Fight Season 2 continues with the momentum of the previous year and has me anxiously awaiting Season 3, which has been confirmed for 2019.

At the beginning of the season, several lawyers have fallen victim to fatal attacks from former clients, inciting a violent movement against law practitioners for the crime of overbilling. Further complicating matters, the founder of the law firm has recently passed, sending the firm in to a state of limbo as his daughter wants his name removed the firm as well as the loss of former partner Barbara Kolstad (Erica Tazel, Justified). Not to mention Maia’s pending trial following her father fleeing the country. It is perilous times for the newly named Reddick, Bosman, and Lockhart.

Additionally, rising associate Lucca Quinn (Cush Lumbo) experiences complications in both her professional and personal lives following a spur-of-the-moment encounter with her ex-boyfriend Colin (Justin Bartha). The firm is offered an opportunity to work with the Democratic National Committee on a matter that divides the partners, and Diana meets a man (Tim Matheson) who makes her question if she is prepared to reconcile with Kurt (Gary Cole).

The thing I really enjoyed about this season is that it didn’t merely rehash previous ideas from last year, but came with a fresh new angle with the “Kill All Lawyers” storyline. It brought some really new to the show, particularly with Diane, who appeared to struggle the most with the new reality. Everyone struggled, but as she was the focal point, the way she handled it made the story more engaging and relatable for me. It was good to see her in this state of fluctuation with the micro-dosing. That said, she is still Diane Lockhart, and she continued to prove why she was authority figure on the show. The crown achievement of this was in “Day 471”. After a tragedy strikes the office and they find themselves under attack, she takes charge and rights the ship. Additionally, there were a few other standout characters for the season, Nyambi Nyambi, who plays Jay DiPersia, has been bumped to season regular and even has his own character-centric episodes. His outburst during his trial on trumped up charges had me in tears. Speaking of Trump, there are no shortages of references to the POTUS, whom the show casts in in a negative light in almost every episode. At first, it was easily digestible, but by season’s end they were so blatant and unflattering that I’m sure he has a pretty solid defamation suit against them if he was inclined to pursue one. Obviously the show’s creators are not fans of his, and I’m fairly sure that after I heard, he is not their biggest fan either.

The Good Fight is among one of the most well written series that I have encountered and does a decent job of balancing serious subjects with lighthearted office banter and rivals. It doesn’t shy away from real-world issues occurring today such as police brutality (a major subject given he setting of the show) as well as sexual harassment and the #MeToo movement. The most impactful episode for me in regards to real world issues was “Day 436”; it was told from multiple perspectives and encompassed several different opinions in regard to police procedures.

Though she had plenty of screen time, I can’t help but feel like Lucca’s role in the series has been diminished somewhat, with most of her story arc revolving around her pregnancy and the precarious state of her relationship with Colin. That said, the final episode spoke to the possibility of major changes for the character going forward, so that will give me something to look forward to. My potential note for Season 3 is to scale back on the political potshots and concentrate more on the courtroom aspect. There was a decent amount in the earlier episodes, but later in the season most cases were settled out of court. Some of the best examples of the character’s cleverness took place in the courtroom. I would like to have seen more of that.

Jeremy Butler is a film school graduate of the International Academy of Design and Technology. He is been writing for Upcomingdiscs since 2012; however, movies have played a big part of his life for much longer. Favorite genres include horror, science fiction/fantasy, and comedy. Favorite movies are V for Vendetta, Boondocks Saints, Kiss Kiss Bang Bang, and The Godfather.
Justice League: Throne of Atlantis (UHD Blu-ray) (4K) Creed II