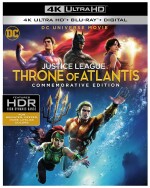 “Not all heroes wear capes.”

To put things mildly, Warner Bros. still has a bit of ways to go before its stable of DC Comics superheroes catches up to Disney’s dominant Marvel Cinematic Universe. However, Warner and DC have long had the upper hand on both the small screen (The Flash, Legends of Tomorrow) and with their animated, direct-to-video offerings. One of those small-screen flicks — 2015’s Justice League: Throne of Atlantis — has just been granted a nifty “Commemorative Edition” 4K release before Aquaman splashes onto the big screen next month.

Throne of Atlantis is loosely based on the arc of the same name from The New 52, DC’s massive 2011 overhaul of its superhero comic books. The movie is also a sequel to 2014’s Justice League: War, which chronicled the formation of the titular superhero all-star team. War, however, did not feature Arthur Curry, the half-human/half-Atlantean hero better known as Aquaman.

As a result, this sequel heavily focuses on Arthur’s journey toward becoming Aquaman (voiced by Matt Lanter). After the crew of a naval submarine is inexplicably slaughtered, Cyborg (Shemar Moore) investigates and encounters a threat serious enough to summon the rest of the Justice League. Although the oceans are peacefully ruled by Queen Atlanna (Sirena Irwin), her son Orm (Sam Witwer) believes “surface dwellers” like the ones in the naval sub are a threat and wants to initiate a war.

In order to prevent this war, Atlantean warrior Mera (Sumalee Montano) seeks out Arthur Curry, who is unaware of his underwater lineage. Arthur is the son of Atlanna and a human named Thomas Curry, but Atlanna had to abandon them decades earlier to take her rightful place as queen of the ocean. Now Arthur has to face off against his bitter half-brother for control of the ocean…and the rest of the world.

The Arthur Curry/Aquaman arc feels hefty enough to carry its own movie. (And judging by the trailer, it actually looks like the upcoming Aquaman movie borrows pretty heavily from Throne of Atlantis.) However, we can’t ignore the “Justice League” portion of this flick’s title, and the combination ends up being a bit much to cram into a slim 72-minute running time. Unfortunately, it’s the Aquaman portions that feel shortchanged here.

Even though he Arthur is still the focus of the story, his hero’s journey comes off as rushed and underdeveloped. We meet Arthur as he’s drunkenly mourning the death of his father by chatting up a lobster, which is a strong start. However, the movie glosses over the fact that Arthur (a fully-grown adult) never thought it was weird that he could talk to lobsters…or that he could throw a man 100 feet across the air during a bar brawl. (Or that a knife couldn’t penetrate his skin during the same scuffle.) The movie’s other glaring weakness is Witwer’s laughably melodramatic line readings as Orm the Ocean Master; I mean, I realize that it’s tempting to toss nuance out the window when you’re playing a guy named “Orm the Ocean Master,” but Witwer’s hammy voice work made it impossible to take him seriously.

The good news is the Justice League portion of this film features some starry voice talent. Rosario Dawson debuts here as Diana Prince/Wonder Woman, who shares some sparks with Jerry O’Connell’s Superman. Nathan Fillion (as Hal Jordan/Green Lantern) and Sean Astin (as Billy Batson/Shazam) try to outquip each other as the resident Justice League jokesterms, while Moore carries a good amount of dramatic weight as Cyborg tries to figure out how much of his humanity to retain.

The one misstep is Jason O’Mara’s vaguely growl-y work as Bruce Wayne/Batman: it’s like he was afraid of fully committing the way Christian Bale did in Christopher Nolan’s beloved trilogy. (And O’Mara certainly doesn’t have the gravitas of the great Kevin Conroy from Batman: The Animated Series.)

Throne of Atlantis is more effective as a brisk primer for the upcoming Aquaman movie than it is as a satisfying standalone experience. In other words, use this movie to get your feet wet before heading to the multiplex to catch Jason Momoa in action.

Justice League: Throne of Atlantis — Commemorative Edition is presented in an aspect ratio of 1.78:1. The ultra-high definition 2160p image is arrived at with an HEVC codec at an average of 57 mbps. Throne of Atlantis was previously released on Blu-ray in 2015, and this HDR presentation is a clear upgrade. Black levels (or, more accurately, very dark blue levels) offer strong separation throughout the film. That separation comes in especially handy during the chaotic, climactic battle. That being said, this remains a generally dark and murky presentation since a lot of the action takes place in the depths of the ocean. So even though this UHD image is a notable improvement over the Blu-ray version, it still doesn’t really dazzle.

The DTS-HD Master Audio 5.1 track heavily relies on the subwoofer to immerse us in the action. The movie begins with an assault on a naval submarine, and the subs provide a nice, low rumble as the vessel travels underwater and a much larger quake when explosions start happening. The subs also punctuate each blow during Arthur Curry’s bar brawl in Maine and generally provide some welcome oomph to the movie’s sound effects. Dialogue is clean throughout and balanced masterfully with Frederik Wiedmann’s propulsive score. (See Special Features section for more on the music and sound effects.)

All of the bonus material is presented in HD and is available on the Blu-ray disc.

Justice League: Throne of Atlantis — Aquaman: The New King: (14:50) This handy featurette reflects on the evolution of Aquaman in the comics — the character became more savage and less of a punchline as the years progressed — and outlines his classical Hero’s Journey in Throne of Atlantis.

Audio Commentary: Mike Carlin — creative director of animation for DC Entertainment — and Heath Corson — screenwriter for both Throne of Atlantis and its predecessor Justice League: War — team up for this commentary. Since Throne of Atlantis features so many iconic DC heroes, this track heavily focuses on their various abilities, rich histories, and complicated interpersonal relationships.

Villains of the Deep: (11:33) A closer look at Arthur Curry’s two main foes throughout his decades-long comic book history: half-brother Orm the Ocean Master and Black Manta. The featurette dives into the psychology of Aquaman’s sibling rivalry with Orm and examines the very personal origins of the hero’s feud with Black Manta.

Scoring Atlantis — The Sound of the Deep: (30:05) Composer Frederik Wiedmann and other key crew members dive deep on the process of creating the right music to match the emotion on screen, whether Aquaman is at his lowest point following his father’s death or triumphantly claiming his birthright in Atlantis.

Robin and Nightwing Bonus Sequence: (3:50) Executive producer James Tucker introduces and provides commentary for a bonus sequence in which Robin and Nighwing clean up the Scarecrow case Batman was working on in Throne of Atlantis before he was recruited by Green Lantern.

Throne of Atlantis — 2014 NY Comic-Con Panel: (26:44) This panel features Aquaman voice actor Matt Lanter, executive producer James Tucker, screenwriter Heath Corson, dialogue director Andrea Romano, and character designer Phil Bourassa. The group reveals Aquaman was omitted from Justice League: War in order to give his origin story more space, while Corson discusses the mixture of scripted an improvised dialogue in the final product. Overall, this is a surprisingly comprehensive look at the creation of this animated film from a bunch of different angles.

Throne of Atlantis Soundtrack: (1:12:06) Want to watch Throne of Atlantis without any of the pesky dialogue? Well you’re in luck! This bonus feature takes out all the words and focuses on the film’s music and sound effects.

A Sneak Peek at DC Universe’s Next Animated Movie — Reign of the Supermen: (9:33) This featurette is meant to get audiences hyped for this animated follow-up to The Death of Superman. (There’s some great, classic comic book artwork highlighted here as well.)

Honestly, I wouldn’t have totally faulted Warner Bros. for recycling the Throne of Atlantis Blu-ray, slapping the term “Commemorative Edition” on it, and building artificial hype in advance of the upcoming Aquaman movie. It’s a smart, cash-grabby move.

Instead, this UHD release offers a real visual upgrade over the underwhelming original. And even though most of the bonus material has been ported over from that previous Blu-ray release, we do get a solid new featurette “Aquaman: The New King” and a very strong commentary track.