Posted in: Podcasts by Gino Sassani on November 27th, 2018 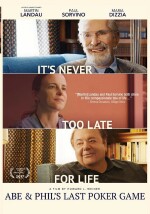 The end of the year is coming. That means holidays and some cooler temperatures (at least for some of you). In the movie industry, it’s awards season. That means yours truly will have the opportunity to see tons of films looking for recognition when it comes time for me to vote. One of these films is Abe & Phil’s Last Poker Game. It features Oscar winner Martin Landau in one of his final films, along with Paul Sorvino. It’s a bit surprising to see these big stars when you discover it was directed by a first-time director who also happens to be a medical doctor working at Harvard. Those are some huge credentials… in the medical industry. I’m talking about Dr. Howard Lee Weiner M.D. This was a story I just had to hear for myself. So I ended up with a chance to talk to Dr. Weiner about this accomplishment. It’s one of the more interesting film stories I’ve heard. Now you can check it out. Bang it here to listen to my conversation with director Howard Lee Weiner M.D.Director Howard Lee Weiner M.D.

You can also discover more about the film by checking it out here: Abe & Phil’s Last Poker Game.

Gino Sassani is a member of the Southeastern Film Critic's Association (SEFCA). He is a film and television critic based in Tampa, Florida. He's also the Senior Editor here at Upcomingdiscs. Gino started reviewing films in the early 1990's as a segment of his local television show Focus. He's an award-winning recording artist for Omega Records. Gino is currently working on his 8th album Merchants & Mercenaries. Gino took over Upcomingdiscs Dec 1, 2008. He works out of a home theater he calls The Reel World. Favorite films: The Godfather, The Godfather Part II, The Body Snatcher (Val Lewton film with Karloff and Lugosi, not the pod people film), Unforgiven, Gladiator, The Lion King, Jaws, Son Of Frankenstein, The Good, The Bad And The Ugly, and Monsters, Inc.
Holiday Gift Guide Spotlight: CBS Television Succession: The Complete First Season (Blu-ray)