All The Creatures Were Stirring

Posted in: No Huddle by Brent Lorentson on December 13th, 2018 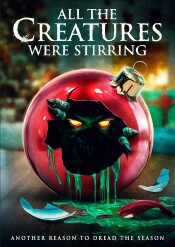 When it comes to Christmas horror films, it’s been a while since there has been a hit that has tackled the holiday and succeeded.  For me you’d have to go back to 2010 with Rare Exports: A Christmas Tale, or more recently Krampus in 2015. But despite the few hits this time of year, there tend to be several attempts for a horror film to come out and make a name for itself.  This year we get the low-budget offering All The Creatures Were Stirring, an anthology film which on paper seemed to show plenty of promise, but the execution resulted in one of the most tedious films I’ve seen this year.  The film opens up with friends Max (Graham Skipper) and Jenna (Ashley Clements) getting together for the holiday since neither has anyone to spend the holiday with, so rather than be alone they go on a bizarre date.  Max decides to take his date to an independent stage performance that is mostly silently performed.  Each act that the performers put on is a story that we see over the course of the film. Though this may be a unique way to present the separate stories, it definitely lacks in execution.

The first story — usually when it comes to anthologies this is the one that tends to be the best or at least should be a major hook.  In this case it was the one that showed the most promise, but struck out. “The Stockings Were Hung” takes the office gift exchange and veers in the most violent direction you could expect as the tone of the exchange becomes a game out of the Saw franchise as the coworkers open “gifts” that are weapons or are evidence of the coworkers doing some bad things while on the clock.  I get where they were going with this, and this really could have been a fun story, but between some bad acting and the story crawling at a slow pace, it was difficult to care about any of these characters.

“Dash Away All” is a tale about a last-minute shopper who gets stranded in a shopping mall parking lot, and the only people around that can possibly help are a pair of girls who seem to be living out of a van that are also in the parking lot.  This is another tale that has some good elements and is easily the better story of the bunch, but it still suffers from some pacing issues.  I’m not expecting a fast-paced film, and I can understand attempting to build tension with silence, but there are so many extended pauses in this film where it’s as though the editor just submitted an assembly edit rather than put in the effort to polish this.

There are a few other stories, but the one stuck with me the most is the final story, “In a Twinkling”.  We meet a character who decides he wants to be alone for Christmas, and we see his plans involve chaining himself to his bed. I liked how this teased numerous possibilities, and when his friends end up giving him a surprise visit, I was even more engaged, wondering if we were going to see him make some sort of violent transformation.  The story takes a surprise twist and goes a sci-fi route.  Here’s the thing, while I like what they are attempting here, it feels too short in the sense of story content, but at the same time the scene cuts make the pacing feel too long.  And basically that seems to be the issue with the entire film.  There is good stuff here, but simply not enough story, filled with unnecessary takes and moments that seem to do nothing more than pad the running time of the film. At the end of the day, All The Creatures Were Stirring is a misfire with the best intentions, so if at all possible avoid being caught near the mistletoe with this title.

Brent Lorentson is a horror writer and film critic based out of Tampa, Florida. With a BA in Digital Film, he co-wrote and co-directed Scavenger Hunt. His short stories have appeared in various horror anthologies. In 2019 his short script Fertile Blood will be a part of the anthology horror film Slumber Party. He is currently working on his first novel A Dark and Secret Place set to be released in late 2019. Favorite Films: Taxi Driver, Fight Club, I Saw the Devil, The Wild Bunch, Dawn of the Dead, A Clockwork Orange, Pulp Fiction, Heathers, The Monster Squad, and High Fidelity.
Fancy Nancy: Volume 1 Billions: Season Three