Posted in: No Huddle by Jeremy Butler on December 13th, 2018 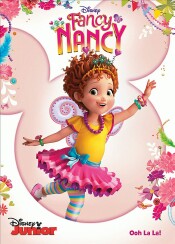 The things we do for our children. That was all I could think of while watching Fancy Nancy, another Disney Junior series. Nancy is a girly girl with a love of all things glittery and French. Funny, I can think of another little girl who fits that description. It goes without saying that Nalyce was immediately on board for this disc, going as far as to remind me every day that we need to review this show. When we finally set down to watch it, she was all business, turning off all the lights and basically becoming a zombie staring at the screen. I mean, I’ve never seen her so dedicated to anything. I have to admit a certain level of pride. Sadly, I was not as enamored with the show as she was.

The series is laid out in the typical format for a Disney series: two episodes per thirty-minute format. Each episode imparts an important lesson that every child should screen to function as a productive member of society, such as the importance of sharing and accepting people for who they are. After every episode I made sure Nalyce told me what the lesson she learned from the episode. It was only slightly less painful than pulling teeth for both of us, as I found myself having to use the privilege of watching another episode as an incentive for her. For her, it was more about the entertainment than the embedded lesson. Nevertheless, I’m a parent first.

For me, I wasn’t impressed by the glitter or the tidbits of French the audience are treated to when Nancy breaks the fourth wall to explain a particular phrase. I guess you can call me a snob; I expect my kid shows to have a theme of the supernatural or feature an overactive imagination. Here it just about an average girl who likes to dress up and conduct herself with an air of class. Additionally, I am clearly the wrong gender for this show, as the target audience is obviously girls. Still I stick it out, which brings me back to my earlier utterance: the things we do for our kids.

Nalyce was a fan from the very first episode. Her attention did begin to waver around the midway point, for which I can’t blame her. Watching 12 episodes (six full-length episodes) of anything can become a bit tedious for someone her age. Fortunately, we broke it up over a period of two days to make it easy to digest for her. She clearly resonated with the Nancy character. Despite the two of them being around the same age, I think she saw her as someone to look up to and aspire to be like. She’s actually requested that we put a tea party on the books.

Though I wasn’t as invested as Nalyce, I do appreciate that the series has a clear message for the younger generation and sets a good example for her to follow. As a parent, I can’t ask more than that from a series. Of course now I have a six-year-old bounding around the house, speaking French. Oh frère (translation: oh brother) .

Jeremy Butler is a film school graduate of the International Academy of Design and Technology. He is been writing for Upcomingdiscs since 2012; however, movies have played a big part of his life for much longer. Favorite genres include horror, science fiction/fantasy, and comedy. Favorite movies are V for Vendetta, Boondocks Saints, Kiss Kiss Bang Bang, and The Godfather.
Tuesday Round Up: December 11, 2018 All The Creatures Were Stirring