Posted in: No Huddle by Jeremy Butler on December 15th, 2018 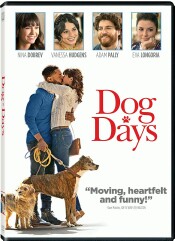 Dog Days is your basic ensemble film, with this time the story being dog-centric, as every subplot features a different dog, and some subplots are interconnected via one dog. It is a family-oriented film, so this time you all will not only been treated to a Nalyce stamp of approval, but a Jessica (my wife) stamp of approval as well. The cast is rounded out with a number of familiar faces that includes Nina Dobrev, Tone Bell, Vanessa Hudgens, Eva Longoria, and many, many more. The story tugs on the heartstrings a bit as it addresses several issues plaguing the cast, such as dealing with loss and opening yourself up after heartbreak. Needless to say, the film had the Jessica stamp of approval the second that Chihuahua (which in my opinion is just a bigger member of the rodent family) was found behind the dumpster. And of course, now I find myself fielding requests for a dog just in time for Christmas.

The story is intercut between several characters at different points in their life; Tara is a barista at a local café, recent college graduate trying to figure out her next step, when she finds a dog abandoned behind a dumpster at the café. Being a decent human being, she takes it to the vet, where she meets Dr. Mike (Michael Cassidy), with whom she is instantly smitten. Speaking of smitten, Garrett (Jon Bass) is a patron of the café that Tara works at and owner of a struggling animal rescue. He’s awkward and immediately taken with Tara, who is wrapped up with her doctor infatuation.

Meanwhile, Elizabeth finds herself clashing with her new co-anchor, Jimmy. The two appear to have nothing in common but their mutual love for their pets. Is that enough to build a romance? Apparently it is. Also going on is adoptive parents Grace and Kurt (Eva Longoria and Rob Corddry) working to connect with their new daughter, which gets off to a rocky start until they find a runaway that helps to bring her out of her shell. However, as one family gains a pet, the dog’s original owner struggles with its absence, as it was one of the last remaining memories of his recently deceased wife.  Finally (anyone getting the impression that we may have one too many storylines going on right now?) Dax (Adam Pally) is forced to care for his sister’s dog following the birth of her kids. A wannabe musician, Dax has never really had responsible until now.

Yeah, so as I mentioned earlier, there was one too many storylines occurring for my liking. The film could have benefited a bit more if they would have cut one. In my opinion, I could have done without the Dobrev/Bell storyline, though the two have decent chemistry, which is a good thing given that they are starring in a television series opposite one another this fall. It’s just that for me, there was more emotional resonance with the other stories, plus you already had the romance angle covered with Hudgens/Bass/Cassidy deal. Just feels redundant.

Dog Days is heartwarming and lighthearted, with the exception of the grief-stricken character, but even that avoids becoming too depressing. It is a movie that the entire family can enjoy, as was the case for my family. Even Nalyce was engrossed in the story, which is a small miracle given that there were no animated characters. There is something to appeal to a wide audience; everyone is bound to find something to enjoy. I enjoyed the social awkwardness of Jon Bass, Jessica loved the adoptive parent’s storyline, and Nalyce was completely and utterly focused on all the dogs.

In closing, Dog Days is an opportunity for the entire family to come together and share something. I encourage anyone looking for a group activity to give the film a chance. At the very least it gets you all in the same room for almost two hours. That’s a record for most families.

Jeremy Butler is a film school graduate of the International Academy of Design and Technology. He is been writing for Upcomingdiscs since 2012; however, movies have played a big part of his life for much longer. Favorite genres include horror, science fiction/fantasy, and comedy. Favorite movies are V for Vendetta, Boondocks Saints, Kiss Kiss Bang Bang, and The Godfather.
The Handmaid’s Tale: Season Two (Blu-ray) Mortal Engines