Posted in: The Reel World by Gino Sassani on December 19th, 2018 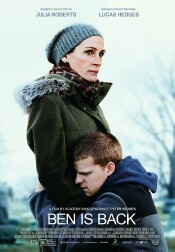 One of the best films of 2018 was Beautiful Boy. Both Steve Carell and Timothee Chalamet deliver absolutely stellar performances as a father and his addicted son. That story took us on a father’s terrifying journey of dealing with his son’s addiction and the toll it takes over a series of years. If you compress that experience down to a single frantic night, you get an idea of what you’re in store for when you go to see Ben Is Back. It’s another heart-wrenching story of the emotional toll that addiction has not only on the addict but the people who love the addict. It’s a Christmas story, but it’s not the kind of story that involves miracles and Santa. It’s about love, but a tough love that only a parent of an addicted child will ever really know. But this film will take you close enough to the experience, perhaps closer than you will feel comfortable being. For most of us this is as close as we’ll get…if we’re very lucky.

Ben Burns (Hedges) takes a 24-hour leave from his rehab facility. He wants to visit his mother and family for the Christmas holiday. His mother Holly (Roberts) is glad to see her son, but you can tell immediately she has some concerns as she begins to move things around in her house. She’s hiding any pills and any valuables that might be easy to convert into drugs. Her son is an addict, and while she attempts to be hopeful about his visit, she is concerned if it’s really a good idea for him or the family. She agrees to let him stay for the night and celebrate Christmas. Holly now has a new husband, Neal (Vance), and they have two young children, so it’s not to hard to understand her caution. Plus there is Ben’s younger sister, Ivy (Newton). For Ben’s part we believe that he’s sincere, and he really is. He absolutely understands what his habit has cost him and his family, and he’s making a concerted effort to change. He’s reluctant to go to places like the attic where he used to stash drugs. He understands his own weakness and desperately avoids the things that might trigger his addiction or expose him to the temptation. Those are all good signs, and the family attempts to make the best of it with a bit of uneasy cheer that even they don’t really believe.

Holly insists on supervising every minute that Ben is away from rehab. They take a rather awkward shopping trip together, and when he expresses a desire to go to a Narcotics Anonymous meeting, she demands that she attend. He’s not very happy about having her there, but he’s trying to understand her point of view and accepts her presence. For a while things look like this just might work out. But Ben begins to encounter people and elements from his past, and you can tell that he is somewhat spiraling mentally. Things start to go downhill fast. Ben finds himself swept into his old world when the family dog is taken because another hood feels Ben owes him some money. His attempt to set things right get out of control, and soon Holly is looking for her missing son, dreading the worst.

Peter Hedges wrote and directed this emotional thriller. He obviously feels protective of his material wearing both hats, but he does a very smart thing here. He pretty much allows his actors to carry the weight. He doesn’t feel the need to hit us over the head with his message and trusts both his cast and his audience that the subtle themes will be communicated. The film doesn’t preach, and it doesn’t act out on a need to make sure we “get” it, and it’s mostly because of that approach that we really do get it.

This could very well be one of Julia Roberts’ best performances. From the moment Ben arrives home, she’s able to tell us about years of frustration, heartbreak and pain without saying a word. We don’t need flashbacks or any heavy exposition in order to understand what this relationship has been through. It’s a rather brilliant moment in the story. When she is out there searching for Ben, she finds herself seeing places she’s known for years in a different light. Her performance certainly brings a few sobering thoughts to your mind. It’s easy to think of your own friendly environments, and you can’t help but stop and ask yourself what kind of unknown secrets and stories go on right under our noses. What is happening in the homes around us that we never truly see. She puts us in her position, and it might cause you to question everything around you.

Lucas Hedges has a bit of a disadvantage here that might not be so apparent. The director is his father, and while some might think that makes his job easier, it doesn’t. He has to go places that no father wants to see his son go, and he needs to be there completely and emotionally, or it’s all lost to us. I would think that has to be harder with your Dad there watching every move you make. Easier or harder, Lucas Hedges goes where he needs to go, and he does it with nuance. His dialog doesn’t tell me near as much as his body language does. He can talk about wanting to get right, but let’s be honest. All drug addicts do that, and they can be very convincing. But watching his reactions, you can tell that Ben hates what he’s become. He wants to fight it, and you can tell that he’s reached some kind of acceptance about what he is and that he doesn’t have the strength to change. Perhaps it’s why he came home. You can also tell that he’s painfully aware of how much he hurts the people he loves. I believe Ben wants to change, but I know he can’t…at least not at this point in his life. Again it’s all in the performance and less a part of the script. These are two of the most honest performances I’ve seen in quite some time.

On paper there doesn’t appear to be much ingenuity in the film’s script. I think all of that comes from the actors. I suspect one should be cautious about this one if you’ve suffered from either side of this tragedy. It’s likely to bring a lot of bad stuff to the surface. It’s not a terribly hopeful film, but there is a glimmer of it in the end. Actually, maybe this really is about Christmas miracles and the like. You’ll have to decide that on your own. It’s an intense film that pushes all of the right buttons without drawing you a diagram of what buttons to push and exactly how to push them. Both father and son Hedges have something to say, and sometimes the best way to say anything is not to say it at all. And what you think you know, “You don’t know at all.”

Gino Sassani is a member of the Southeastern Film Critic's Association (SEFCA). He is a film and television critic based in Tampa, Florida. He's also the Senior Editor here at Upcomingdiscs. Gino started reviewing films in the early 1990's as a segment of his local television show Focus. He's an award-winning recording artist for Omega Records. Gino is currently working on his 8th album Merchants & Mercenaries. Gino took over Upcomingdiscs Dec 1, 2008. He works out of a home theater he calls The Reel World. Favorite films: The Godfather, The Godfather Part II, The Body Snatcher (Val Lewton film with Karloff and Lugosi, not the pod people film), Unforgiven, Gladiator, The Lion King, Jaws, Son Of Frankenstein, The Good, The Bad And The Ugly, and Monsters, Inc.
We, The Marines Mary Poppins Returns