Posted in: Disc Reviews by Gino Sassani on December 19th, 2018 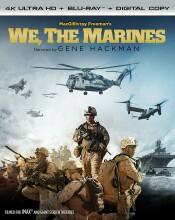 Gene Hackman narrates an IMAX look into what it means to be a United States Marine. He’s the perfect choice, and not because he has such a distinctive and authoritarian voice, but because he was also once a Marine. There’s an element of pride in the narration that just can’t be faked.

The film begins with a short history of the Marine Corp that was established in 1775 to act as gunboats to watch over Navy vessels and landing troops. They were instrumental in winning the Revolutionary War and continue to be a crucial part of America’s defense.

We meet a fresh unit of recruits as they arrive at Paris Island, North Carolina for a 12-week boot camp that will be the most intensive training given any military force in the world. We see them arrive, always in the middle of the night, and take their places on painted footprints where generations of Marines stood before them. We get a short look at the training these recruits undertake before their final test, a grueling 54-hour endurance event called The Crucible. They learn teamwork and begin to develop the bond that will make them Marines forever.

From here the film spotlights several of the bases across the country, and we learn about their specialization. We visit Camp Pendleton, where dogs are trained to sniff out explosives. In the California High Sierras, Marines are trained for cold weather since the days of The Korean War. They have to jump into a frozen lake through a hole cut into the thick ice. In Arizona the Marines train to use helicopter gunships to protect soldiers on the ground and rehearse for mid-air fueling and landing troops safely and retrieving them. At Twentynine Palms, California they train to coordinate a great number of assets for a village landing. They prepare soldiers for extreme firefights and play complicated war games with the latest technology. At Quantico we witness officer training that forces them to endure the harshest of conditions. Throughout it all the Marine motto: Semper Fidelis (Always Faithful) is drilled into the core of each and every member of the Marines.

Director Greg MacGillvray has made a career out of shooting IMAX films. He’s willing to go to the most hostile environments and the very ends of the Earth to bring us something we can truly experience both in the huge theaters and now at home on UHD. These are short films but often they take as long, if not longer, to make than a blockbuster in Hollywood. You have to be willing to go where the action really is, and these cameras are bulky and very heavy. They’re also very fragile. His reputation has gotten him the kind of access that makes films like this one possible. These military guys don’t often trust filmmakers around their facilities and equipment. It’s one of the things that’s given Michael Bay such a boost in his career. Military people trust him and give him the kind of access other directors couldn’t get for any price. MacGillvray has that kind of reputation, and the quality shows in a film like this. He has to tell his story in under 40 minutes, and the audience has to feel like they got something complete. You will here.

Shout Factory has been at the forefront of bringing these IMAX films to the 4K UHD format. These films are the perfect source material to show what the format can do. The original prints are 65-70mm and are filmed at a native resolution much higher than a UHD disc can reproduce, so you’re getting everything but the massive screen here. It’s a brave risk because of the limited audiences for these specialized films. But there’s absolutely something for everybody in the IMAX library, and your support of these discs is the only way to keep them coming.

We, The Marines is presented in an aspect ratio of 1.78:1. The ultra-high-definition 2160p  image is arrived at by an HEVC codec with an impressive average bitrate of 75-80 mbps. Again IMAX films are great in this format. The aspect ratio is a bit tricky. It’s not quite what it was in IMAX, and that’s because they want to be friendly to smaller screens. I wouldn’t mind if they allowed both versions. For the most part, you won’t really mind the ratio. There are a few scenes were the image does feel distorted, but much of it has been “framed”, which allows it to work in various theater environments. Color is brilliant and lifelike. One of the most impressive presentations is when the Marines are jumping from a plane. The bright blue sky is simply magnificent, as is the detail of the ground features from such a height. There’s nice texture as trainees trudge in the muck. The dress uniforms really exhibit both the color and contrast advantages of HDR. The deep blue (black?) tops against the bright white pants is a vivid image. The red trim stands out like it couldn’t in HD and the brass buttons and medals allow a wonderful measurement of detail. Black levels are near flawless. You have the option of SDR in case your set isn’t compatible, but I suggest you go and get one that is.

The Atmos track defaults to a pretty solid 7.1 mix. Let’s be honest. These kinds of documentary films aren’t going to blow you away with the audio. The narration is what must be primarily served, and it’s simply great here. There’s a good level of sub that gives Hackman’s voice just the right amount of depth. Surrounds do a good job when we’re on a helicopter or other equipment. The score is rather minimal, but effective. When the Marines are jumping, it’s the swirling wind in the surrounds that makes this a subtle but quite immersive experience.

The extras are all on both the Blu-ray and UHD copies of the film.

We, The Marines Addendum – Exclusive Behind The Scenes Interviews And Footage: (21:44) I hate extras with long names, but in this case the name says it all.

Many will look at this as merely a recruitment film for the Marines. There is certainly that aspect to the film’s theme, but that’s not all this is about. The IMAX cameras allow us to see these activities in an immersive way that few outside the Corps will ever experience. There’s also a lot to be learned here. It doesn’t matter what your politics might be; these are the men and women who serve all over the world with the job of protecting us here at home. For these men and women, it’s a job and much more. For us it’s a feeling of security that isn’t found quite anywhere else in the world even in the aftermath of 9/11. You may have your own opinions about the military but you have to respect the work that they do. “Believe me. It ain’t no walk in the park.”

Gino Sassani is a member of the Southeastern Film Critic's Association (SEFCA). He is a film and television critic based in Tampa, Florida. He's also the Senior Editor here at Upcomingdiscs. Gino started reviewing films in the early 1990's as a segment of his local television show Focus. He's an award-winning recording artist for Omega Records. Gino is currently working on his 8th album Merchants & Mercenaries. Gino took over Upcomingdiscs Dec 1, 2008. He works out of a home theater he calls The Reel World. Favorite films: The Godfather, The Godfather Part II, The Body Snatcher (Val Lewton film with Karloff and Lugosi, not the pod people film), Unforgiven, Gladiator, The Lion King, Jaws, Son Of Frankenstein, The Good, The Bad And The Ugly, and Monsters, Inc.
The Orville: Season 1 Ben is Back