Posted in: No Huddle by Brent Lorentson on December 20th, 2018 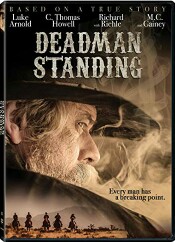 The story is loosely based on a real incident called “The Newton Massacre”, which was basically a brutal shootout that took place in a saloon back in 1871.  Though we do get to see the incident in the film, the story places most of its focus on the events that in theory led up to this violent showdown.  It’s a good idea, and after reading up on the actual shootout, this could have been a tale that would have suited Eastwood, John Ford, or Howard Hawks. Deadman Standing has all the right parts to make a great independent western; unfortunately, by the time you’re ten minutes into the film, you’ll see that this film was a misfire.

The film wastes no time in setting up the political divide that has struck the small boomtown of Hyde Park.  There is an election that is going to take place, and basically it’s a battle over land between the cattlemen and those who work for the railroad.  Stuck in the middle of this fight is the town’s lawman, Mike McCluskie (Luke Arnold), who is too outgunned and outmanned to really make much of a difference and is simply trying to keep the town together, though he knows eventually there is going to be bloodshed.  But instead of keeping things simple, the filmmakers have injected so many characters with some rather clunky dialog that the story does get to be tiresome and un-engaging.

Here’s an issue I have with most westerns that this film suffers with from the get-go.  Why is it everyone looks clean, and the sets look like sets that have recently just had the sawdust blown off?  Where is the dirt, the mud, the flies?  If you want to make this believable, look at the Man with No Name trilogy from Sergio Leone or the first Django film. These are smaller-budget films (excluding The Good, The Bad, The Ugly, of course) but they got how life would have been back then, and from the opening frames they immersed you into this western world.  Deadman Standing immediately feels as though you’re watching a bad reenactment at a tourist trap, but you stick around because of the promise of the big, bad showdown that is expected in any western.

Where the film makes an attempt to get interesting is when a member of one of the feuding sides decides to rough up one of the saloon girls. It just so happens James Riley (Quinn Lord) has a soft spot for this girl, and he wants revenge.  Because Riley is supposed to be suffering from tuberculosis, perhaps his pitiful attempt to fight the man shouldn’t have been so comical, but it really sets up for how pathetic of a fighter the character is supposed to be.  Where this becomes more ridiculous is a montage that later follows where in a matter of days Riley becomes an expert with a gun.  This eventually leads up to yet another unintentional comical moment where Riley confronts a man with the line, “Guns or knives?”  Seriously, we’re supposed to believe the kid has become a badass over night, and TB be damned if it’ll stop him?

By the time the film reaches the climax at the saloon, it should come as no surprise that even this scene manages to be snooze-worthy.  Reports on the real gunfight report 100 rounds being fired; we get nothing close to this, and the result is just bad.  You don’t need a high body count to have a cool and intense shootout; it’s all about editing, and that is simply another issue that this film suffers from.  From long fades to black to scenes simply overstaying their welcome, it’s no surprise the notion of quick edits in a shootout wouldn’t even make an appearance.  Even the cinematography seems uninspired throughout the film as we get some rather pedestrian and boring shots.  I get that the film is shooting on a budget, but that’s precisely why you inject some creativity into shots to help the film stand out.

If you’re looking for historical accuracy or a cool new western, well, as the title implies, it stands lifeless alongside many other films in the genre.  While this isn’t the worst film I’ve seen all year, it’s one that disappoints me greatly.  There is a solid cast that’s been put together here, but the execution is just painful at times.

Brent Lorentson is a horror writer and film critic based out of Tampa, Florida. With a BA in Digital Film, he co-wrote and co-directed Scavenger Hunt. His short stories have appeared in various horror anthologies. In 2019 his short script Fertile Blood will be a part of the anthology horror film Slumber Party. He is currently working on his first novel A Dark and Secret Place set to be released in late 2019. Favorite Films: Taxi Driver, Fight Club, I Saw the Devil, The Wild Bunch, Dawn of the Dead, A Clockwork Orange, Pulp Fiction, Heathers, The Monster Squad, and High Fidelity.
Mary Poppins Returns Who’s Harry Crumb? (Blu-ray)