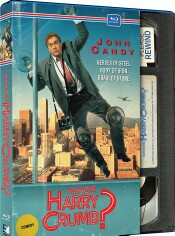 Our parents always told us that we shouldn’t have too much Candy. The late comedy legend John Candy spent most of the 1980s either playing a scene-stealing sidekick (Splash, Spaceballs) or sharing top billing with fellow funnymen like Steve Martin (Planes, Trains & Automobiles) and Dan Aykroyd (The Great Outdoors). In 1989, Candy released four films and graduated to solo leading man status. One of those movies was Who’s Harry Crumb? a kooky caper that hasn’t aged very well but still serves as a showcase for Candy’s talents.

Harry Crumb (Candy) is the bumbling black sheep in a long line of private investigators who established a successful agency in Los Angeles. Eliot Draisen (Jeffrey Jones) is the slimy current head of the agency who assigns Harry to a case involving the kidnapping of multi-millionaire P.J. Dowling’s (Barry Corbin) favorite daughter. Why would Eliot assign an inept private eye like Harry to such a high-profile case? Well, that’s one of many questions Harry has to stumble though as he investigates a list of suspects that includes Dowling’s young sexpot wife Helen (Annie Potts).

Who’s Harry Crumb was executive produced by Candy and directed by his fellow SCTV alumnus Paul Flaherty. So it’s no surprise that Who’s Harry Crumb? feels less like a movie and more like a series of sketches tied together. It’s too bad because a more visually daring or interesting director could’ve really leaned into (and poked fun at) the movie’s more noir-ish elements.

What we get instead is basically a collection of scenes with Candy — in full-on “deluded blowhard” mode, which was not the comic’s best look — showing off his fantastic physical comedy chops as Harry wreaks havoc all over Los Angeles. (The movie was shot in Vancouver, which unconvincingly stands in for L.A. here.) The bits where Harry tries to take off latex gloves, is perched atop a ceiling fan, or is dressed as a jockey who gets trapped in a phone booth (a gag that plays on Candy’s size on two different levels) are when Candy is at his strongest. (There’s also a priceless pterodactyl egg that you just know will end up getting destroyed at some point.)

On the other hand, the movie falters when Candy goes way too broad. Harry is allegedly a master of disguises, yet the private eye consistently takes on the most outrageous and conspicuous fake characters you can imagine. The Einstein wig he rocks in his first scene is puzzling enough, but things take a bit of an awkward turn when Candy/Harry disguises himself as a hairy Hungarian businessman (he mostly just looks like a genie) or as an Indian A/C repairman. These gags obviously wouldn’t fly if this movie were released in 2018. But I’m not mad at them because they’re offensive; the thing that offends me is that these scenes are just flat-out unfunny and they bury the charming Candy under layers of ridiculous makeup.

The good news is the movie clocks in at a very breezy 89 minutes. Jones, a consistent ‘80s/early ‘90s skeezeball, gets to do a more intense version of his shtick. Potts looks the part of a femme fetale, but her monotone delivery undercut the spell Helen is supposed to cast over men. Shawnee Smith — who went on to become of Jigsaw’s very first targets in the Saw franchise — appears in an early role as Nikki, the younger, overlooked sister of the kidnapped girl. Harry enlists Nikki’s help in solving the case, and Candy and Smith’s chemistry is the best and most believable thing in the movie.

Unfortunately, that’s not saying much for what was supposed to be one of Candy’s first big outings as a movie star. Who’s Harry Crumb? has a handful of amusing moments, but if you need to watch a movie from 1989 in which Candy got to show off his skills as a solo leading man…check out Uncle Buck instead.