Posted in: No Huddle by Jeremy Butler on December 21st, 2018 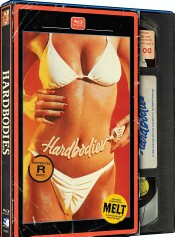 Hardbodies is a sex comedy; there is no other way of putting it. This is a hard R movie; I wasn’t really expecting that. However, between the gratuitous nudity, there is a love story unfolding, and to be honest, the other subplots are secondary to this point. Not exactly my kind of film, mainly due to it being from before my time, but I still found it to be moderately entertaining. Needless to say, this is more of a guys’ movie, as I don’t know of a woman who would not have an opinion or two about this movie, especially given the current climate. Then again, Fast Times at Ridgemont High remains a classic to this day. I’m not putting this on that same level, but in my opinion it deserves a fair shake and to be paid the respect of the time period.

Scotty is your typical California beach bum, doing whatever he can to get along. That is until he is evicted from his apartment for not paying his rent. Down on his luck, desperate to maintain his way of life, he soon finds three older men who have a lot of money, but they do not have a trait that Scotty possesses, his abilities with women. They agree to let Scotty stay with them at their beach house and pay him a monthly stipend if he returns the favor by teaching them how to pick up women.

Scotty teaches them how to “dialog” women by giving them a dose of the old BBD (Bigger and Better Deal). While the guys implement his method, Scotty reconnects with acquaintance Kristi. His normal tricks won’t work with her, as Kristi knows all about Scotty’s playboy past. Scotty recognizes that Kristi realizes that she is something special, and to be with her he may just have to change his ways. However, it is not that easy for a leopard to change its spots.

As I mentioned earlier, leave the politics at the door if you want to enjoy this movie. If you are capable of doing that, I think you will find it enjoyable; I did. Granted it was a bit difficult to resonate with the lingo and themes of that time period at times, but overall it transfers just fine to a modern audience, especially of the male variety. As I mentioned earlier this is a hard R movie, not meant for kids.

The story is led out in a straightforward fashion, and there is very little deviation from the predictable layout. However, that is coming from someone of a different generation. With respect to the time period, the story is pleasing and faithful to its time period. There is a bit of a love story angle, but not your traditional one, as it is the guy who goes through the story arc and making the declaration. The characters are interesting and relatable, particularly Scotty, who is our eyes into this word. His relationship with Kristy provides the story with substance, as it is a modern theme found in movies that exist today; everyone wants the person they are in love with to be their best friend.

I wouldn’t call it a classic in regards to substance; it is a bit straightforward and predictable, but it is still a entertaining experience as long as you are of the proper age.

Jeremy Butler is a film school graduate of the International Academy of Design and Technology. He is been writing for Upcomingdiscs since 2012; however, movies have played a big part of his life for much longer. Favorite genres include horror, science fiction/fantasy, and comedy. Favorite movies are V for Vendetta, Boondocks Saints, Kiss Kiss Bang Bang, and The Godfather.
Silent Rage – Retro VHS Look (Blu-ray) Aquaman