Posted in: No Huddle by Brent Lorentson on December 21st, 2018 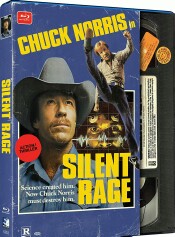 one of the biggest action stars in Hollywood.  He got his start in martial arts films; The Way of the Dragon was his big coming out as we got to see him go toe to toe with the legend Bruce Lee.  So in 1982 when Silent Rage came out, people knew what to expect out of Norris even though this was still before some of his biggest hits.  I remember seeing the movie when I was a kid. It was part of a Chuck Norris marathon, where I also got to see Firewalker, a film that for some reason I became obsessed with. (Upon re-watching it years later, the film didn’t hold up at all).  That’s sort of the thing with a lot of films that you adore as it kid; they don’t quite hold up as much as you would like them to, so I was a bit hesitant when Silent Rage was offered to review.  Would it hold up as a fun action romp, or would it let me down?

Sheriff Stevens (Norris) is the lawman in a small Texas town that doesn’t seem to ever have much trouble, and that seems to be fine for the sheriff.  The film opens up with Jack Kirby (Brian Libby) waking up and obviously on the edge of losing it. As it turns out, he’s completely gone insane and goes on a mini killing spree at the home where he is staying.  The sheriff and the deputies are called to the home, and after a small confrontation, Kirby is gunned down.  Kirby eventually is pronounced dead, but not for long, since he is under the care of a mad scientist and a pair of other doctors (one including Ron Silver) who believe they have a cure against disease and possibly even death.  It’s no surprise when the doctors inject Kirby with this serum things will go bad; they just aren’t ready for how bad it can get.

While the doctors are playing mad scientist, Stevens is mentoring one of his deputies who seems to be unsure of his place working in law enforcement.  This relationship is simply one of those plot devices that’s added in to pad some time to the story, and even in a film with a superhuman killing machine, this bond between the sheriff and his deputy just doesn’t feel right in this film.  There is another relationship here, one between Stevens and an ex-lover Alison (Toni Kalem) that attempts to show us Stevens isn’t just a rough and tough guy, that he can also be a lover, but let’s be serious; this isn’t why we’re watching the movie.

So one of the film’s bright spots is we get plenty of action, one instance of which has Norris exchanging blows with a biker gang in a bar.  Sure, the scene is tonally off from the rest of the film, but it’s forgiven, because this is what people have thrown down their money to see.  It’s not quite the main event of the film, but it’s enough to get excited for the big showdown at the end of the film.  Sure, there are also some interesting kills as Kirby goes on a new spree; it’s not enough for me to call it horror, but it definitely sets up that this won’t be a simple foe for Stevens.

One of the film’s issues is simply that Norris just doesn’t have the range to pull off some of the film’s more dramatic moments. It’s mostly forgivable, because it seems the script was adjusted for him, but when you see him in scenes with Ron Silver, well, the lack of range is more obvious.  Another issue is with the fight scenes with the killer. A lot of the suspense is lost by going to the wide shots.  Sure, it’s great for showcasing the fight choreography, but in the process a lot of the suspense was lost.

Is the film great?  Not by a long shot, but it’s still a fun good ol’ boy hybrid with horror undertones.  It’s definitely worth checking out if you’re a fan of the genre, it’s one to have a few drinks and enjoy the macho machismo that the 80’s action films were known for.  The biker fight alone is worth checking out, as is the final showdown.

Brent Lorentson is a horror writer and film critic based out of Tampa, Florida. With a BA in Digital Film, he co-wrote and co-directed Scavenger Hunt. His short stories have appeared in various horror anthologies. In 2019 his short script Fertile Blood will be a part of the anthology horror film Slumber Party. He is currently working on his first novel A Dark and Secret Place set to be released in late 2019. Favorite Films: Taxi Driver, Fight Club, I Saw the Devil, The Wild Bunch, Dawn of the Dead, A Clockwork Orange, Pulp Fiction, Heathers, The Monster Squad, and High Fidelity.
The House with a Clock in Its Walls (UHD Blu-ray) (4K) Hardbodies – Retro VHS Look