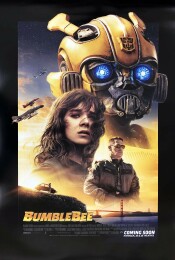 The world of the Transformers is back with more action, adventure, and science fiction fun for everyone. The most loved Autobot from this world has a history that explains where these troubled characters all began. As the battle of Cybertron comes to a conclusion, the Autobots make their move to flee from the Decepticons to an unknown location to later meet up and regroup. Optimus Prime (Peter Cullen) tells B-127/Bumble Bee (Dylan O’Brien) that he must flee and head to earth and hide until it is safe to meet up again. Once on earth, Bumble Bee must find a place to be unnoticed. He must find a secure safe location for his fellow Autobots and defend earth until Optimus Prime returns. During his landing on to earth, he encounters a team of soldiers training for battle called Sector 7. This team led by Agent Jack Burns (John Cena) fear for their lives when the capsule transporting B-127 crashes in the forest nearly on top of his team.

In present time Charlie Watson (Hailee Steinfeld), a teenage girl struggling through high school, is trying to find her way. Suffering from the death of her father, she is not transitioning well, while her mother, Sally Watson (Pamela Adlon) and brother, Otis Watson (Jason Drucker), have begun to move on. With the addition of her new stepfather, Ron (Stephen Schneider), Charlie is desperate to find a way out.

When in search of a car to be able to show that she belongs to the in-crowd at school, she stumbles across a yellow Volkswagen bug in a desperate need of attention. This is where these two meet (Charlie and Bumblebee), and the real story begins.

Director Travis Knight establishes the theme of the story very quickly and manages to continue to flow the storyline perfectly. He includes spectacular special effects that make this world come alive and almost compels us all to believe these characters really exist. Along with some great acting, an excellent soundtrack, and lots of action, this film will keep you entertained.

Developing this in-depth detailed remarkable origin story, this hands down has become the best chapter of all the Transformers films. It includes a well-balanced adventure that is sure to entertain, especially those teenagers who never seem to like anything.

I based my grade on well detailed and outstanding storyline that includes impressive special effects, and amazing action scenes.

John Delia has been on all sides of the movie business from publicity, writing for publications and on line blogs, script writing, to film making. Writer, critic, film editor he has worked as a film critic on this second go around for 14 years. He earned his Bachelor’s degree at the college of Journalism and Communications at the University of Florida in Gainesville, Florida. John is an active member of the Southeastern Film Critics Association (SEFCA) . Favorite Films: Lord of the Rings/Hobbit trilogies, The Godfather trilogy, the Indiana Jones trilogy (I didn't like the 4th), The Avengers and for TV it's Game of Thrones. As for animation it's a tie between anything Pixar and everything Hayao Miyazaki.
Aquaman The Predator 2018 (UHD Blu-ray) (4K)